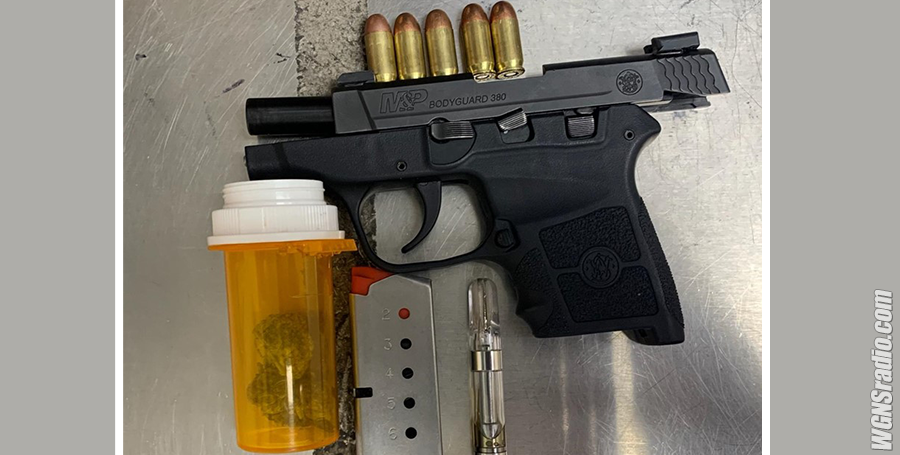 Above: Found at Stewarts Creek High School in Smyrna, TN

SRO Matt Clagg charged a 16-year-old Stewarts Creek High School student with possession of a weapon on campus and simple possession of marijuana after school resource officers found a handgun and marijuana inside his backpack.

They detained another student who was not arrested after the investigation.

Clagg arrested the student and transported him to the Juvenile Detention Center where he awaits a Juvenile Court hearing Sept. 28.

Sheriff Mike Fitzhugh said due to the relationships that our School Resource Officers have with the students and the school administration, they were made aware of a possible threat and took immediate action.

“I am very proud of our SROs,” Fitzhugh said. “They perform an invaluable service each and every day.”

Other SROs, several sheriff’s patrol deputies and Smyrna Police responded as back up.

Previous UPDATE at 11:30AM on Tuesday:

An investigation at Stewarts Creek High School in Smyrna involving a possible gun being found has now been resolved and an arrest made.

James Evans with the Rutherford County Schools notified parents about the situation on Tuesday morning.

Evans stated, “Rutherford County Sheriff Mike Fitzhugh said Stewart Creek High School is secure and students are safe after a school resource officer received information this morning about a possible student with a gun. Within a short period of time, SROs took two students into custody and detained them.”

Later on Tuesday Evans told WGNS NEWS, "The situation has been resolved, all students are safe and the school has returned to normal operations. After the SRO received information of a possible gun on campus, law enforcement responded quickly and a student has been arrested."

According to the Rutherford County Schools, the arrested student is a juvenile and his name cannot be released due to the fact that he is under the age of 18. However, Evans told parents, "we can assure you he has been expelled from school and law enforcement is pursuing criminal charges."
Tags: custody found gun Murfreesboro news police Rutherford County Sheriff Smyrna SRO Stewarts Creek High School students Tennessee TN
Sections: News