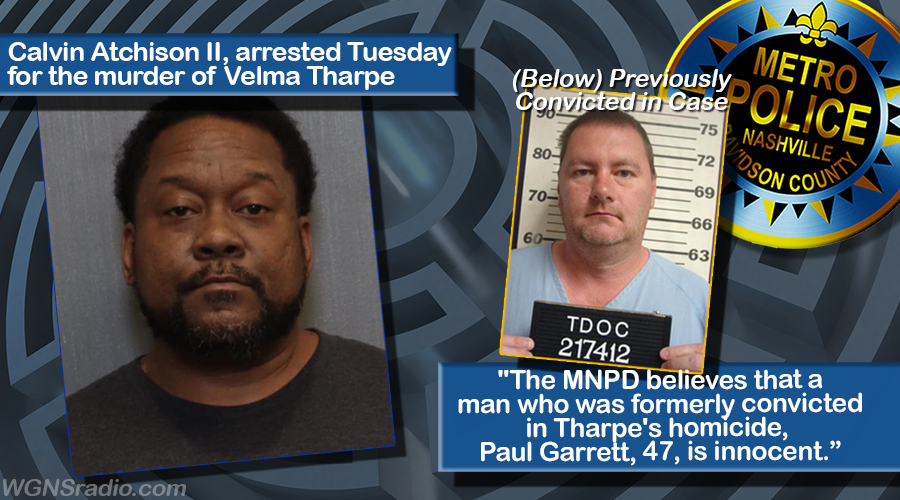 A murder case in Nashville is receiving a lot of attention after the Metro Police Department released new information that the man who was originally convicted in the victims death maybe innocent.

On Tuesday (05/25/2021), Metro - Nashville Cold Case detectives arrested 51-year-old Calvin Atchison II on a grand jury indictment charging him with first-degree murder. Atchison was arrested for the June 2000 murder of 30-year-old Velma Tharpe, who died from strangulation and blunt force trauma to the head and neck.

ADVERTISEMENT
According to the Metro Police Department, they beleive the person who was formerly convicted in Tharpe's death is innocent.

The police department released the following statement, "The MNPD believes that a man who was formerly convicted in Tharpe's homicide, Paul Garrett, 47, is innocent. A petition is pending in Criminal Court for Garrett's exoneration. Garrett's plea to involuntary manslaughter resulted in a sentence of 15 years. He was released from prison in December 2011, according to the Department of Correction."

Cold Case Detective Mike Roland and now retired Sergeant Pat Postiglione learned of DNA evidence in the Tharpe case that implicated Atchison in the summer of 2011 and have continued in their efforts to hold the right man accountable.

Atchison, who was taken into custody on Tuesday at his Apple Valley Circle home, is being held without bond pending proceedings in Criminal Court.