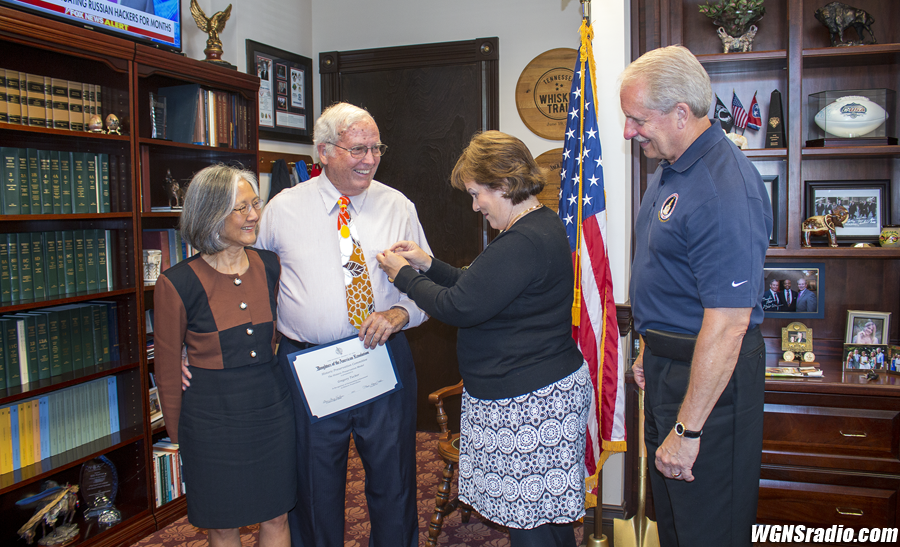 This medal is the most prestigious award the National Society presents to individuals who have done extraordinary volunteer work in historic preservation for a long period of time. According to NSDAR, fewer than 30 are presented each year throughout the entire United States.

The request for Tucker’s receipt of the medal came from Colonel Hardy Murfree Chapter of NSDAR Regent Karen Wagner Hudson, who was able to pin the medal on Tucker in the presence of Rutherford County Mayor Bill Ketron, and Tucker’s wife Minh-Triet.

“I would like to thank Ms. Hudson and the NSDAR for recognizing Rutherford County Historian Greg Tucker with such an esteemed honor,” said Rutherford County Mayor Bill Ketron. “His dedication to preservation of the rich history of our county and his commitment to educating others about its history is unmatched.”

“I sincerely appreciate the nomination by the Hardy Murfree Chapter, DAR, and the award from the NSDAR,” said Tucker. “This recognition is an honor that I share with Rutherford County, the historic preservation leader among Tennessee counties. The recent enhancement of an historic preservation/restoration property tax abatement, the imminent dedication of a new local history museum, and the historically accurate restoration of our antebellum courthouse surely impressed the national DAR judges. Much credit must be given to the current administration of Mayor Bill Ketron.”

Greg Tucker is a beef cattle farmer (since 1988) and manages Gladstone Properties, a property and investment partnership (since 1994). He is also certified as an EMT. He holds a Masters of Management from Owen Graduate School of Management at Vanderbilt University and a Juris Doctorate from the Columbus School of Law.

He is a husband, father, and grandfather and has always been involved in his community. His activities have included Boy Scouts of America where he has received the Silver Beaver, Antelope, and Buffalo awards (first and only scouter in Middle Tennessee Council history to receive all three Silver Awards). He is an Eagle Scout and has served as Scoutmaster, on the Council and Regional Executive Boards and on the National Advisory Council as Area President. He has authored and co-authored twelve BSA publications.

He has also been involved as a 4-H leader; a board member of Stones River Hospital; President, Stones River Region, Antique Automobile Club; Chairman, Rutherford County Metro Study Group, Coach and sponsor, U.S. Boxing Association; a patron at Discovery Children’s Museum, and a board member of Read to Succeed. Greg serves on several county boards including the County Records Commission, the Board of Equalization, and Evergreen Cemetery.

His historic preservation interests and activities include the Cannonsburgh Town Council, and he spent a term as President of the Rutherford County Historical Society and remains a board member. He was appointed as the Rutherford County Historian in 2013. Several of his county appointments relate to historic preservation issues. Greg also delights in delivering a brief “history lesson” each month at the Murfreesboro City Council meetings.

Greg is an author of hundreds of articles pertaining to historic endeavors. He authored four books, “Rutherford Ramblings” (now in its fourth printing), “Rutherford Reflections”, “Remembering Rutherford”, and “Rutherford For Real”. He is a frequent media guest on these subjects on WGNS (Monday morning's from 9AM to 10AM), as well a regular contributor to print media.