UPDATE: Florida Pastor Accused of Rape in Murfreesboro Has Had Case Rescheduled 8-Times 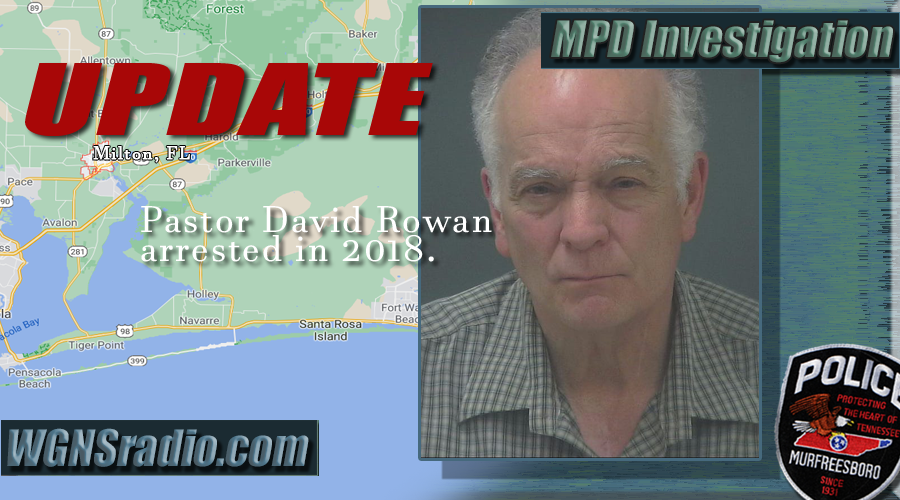 We have another update to a story that you first heard in 2018 on WGNS RADIO.

Reports indicate the Florida pastor accused of molesting two teen girls in Murfreesboro, Tennessee is scheduled to be in court for a pre-trial motion on October 14th followed by a status hearing on November 19th. The trial for Pastor David Rowan is scheduled to take place on November 29th of this year in the courtroom of Judge Barry Tidwell.

Previous to the latestest court dates being confirmed, a continuance of the case has been granted by the courts a total of 12-times. The case has also been rescheduled a total of 8-times since March of 2018.

The investigation into Pastor Rowan started in 2017 when the Murfreesboro Police Department “Special Victims Unit” received a referral from the Department of Children Services. In February of 2018, Pastor Rowan was arrested.

Police say that Rowan was in Tennessee visiting when the alleged crime took place 7-years ago in 2014. At the time of his arrest in 2018, he was a pastor at Faith Baptist Church in Milton, Florida.

A  2018 police report filed by now retired MPD Detective Tommy Roberts, showed that Pastor Rowan was hired to speak at a church in Rutherford County in 2014. During his visit, Rowan allegedly took two teenage girls out for a hamburger and milkshake, which is when he was said to be alone with the victims. At that point, Rowan would have been 59-years-old and the two sisters who are the reported victims would have been only 14 and 15-years-old.

Apparently, the children and their mother knew the pastor before his visit to Murfreesboro. Detective Roberts reported, "The victims looked up to Pastor Rowan and counted on him for spiritual guidance."

Evidence from the investigation was presented to a February 2018 Grand Jury which ended with an indictment. On February 16, 2018, Pastor David Rowan was taken into custody by U.S. Marshal's and transported to the Santa Rosa County Jail in Florida. From there, he was transported to Murfreesboro at a cost of $1,251.58.

Three years after the arrest of Pastor Rowan, he is still listed on the Faith Baptist Church website as their pastor – and three years after his arrest, WGNS has confirmed a trial date has been set in Rutherford County for November 19th through December 2nd.

Rowan has been free since he originally posted bond on March 23, 2018.