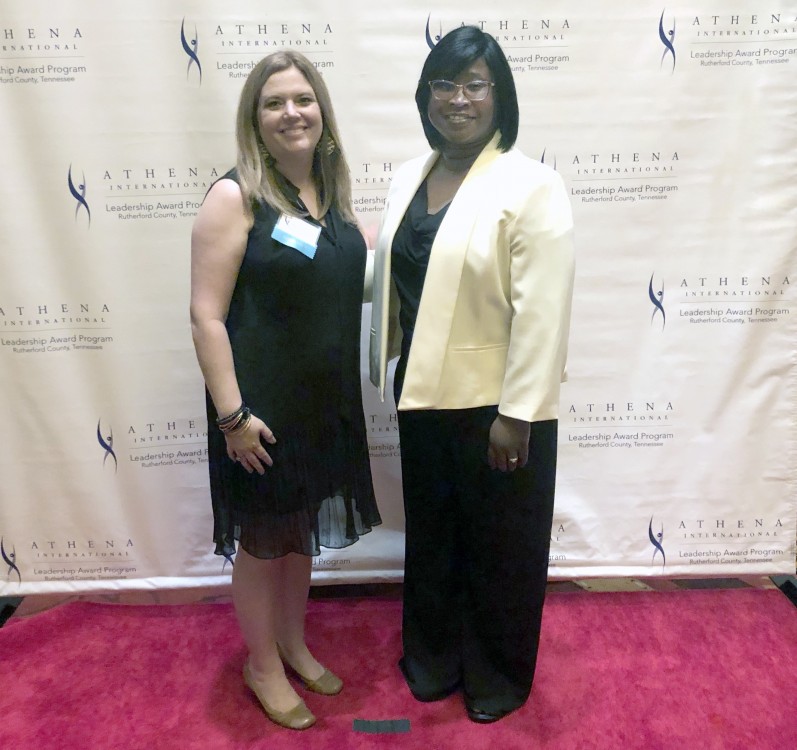 She always preferred working in the background and supporting others with their projects.

But her experience with the Junior League of Murfreesboro has helped develop leadership skills and feel more comfortable taking the reins, she said.

“It’s done so much (for me) professionally and personally,” Holland said. “I never really thought I was a leader. I like to work behind the scenes. I like to help you do all the things, but I don’t like to be out front. Junior League taught me to do that.”

For her work through the organization, Holland was nominated this year for an Athena Award, which is given to individuals who “excel in their professions, give back to their communities and help develop other leaders, especially women.”

The Athena awards are given annually by Rutherford Cable, a local organization whose mission is to affect “positive change to achieve personal and professional success.” The group gives two Athena awards each year — one to a young professional under 40 and the traditional award for leadership.

While Holland didn’t win the award this year — Meagan Flippen was awarded the young professional award and Patti James was awarded the Athena Award — it’s a tremendous honor to be among the nominees, Holland said.

“I was really shocked to be in this group of women,” Holland said, adding that Kim Marable — her principal at Lascassas Elementary — told her it was her duty to go and represent teachers during the award process.

To her knowledge, Holland is the first public school teacher to be nominated for the award during its history in Rutherford County.

“She encompasses the values that we look for in a great teacher,” Marable said of Holland, who will teach first grade at Lascassas in August. “She is not only committed to the students she serves, she is dedicated to our school community. She constantly keeps her parents and our community in the know about the great things her class and our school are doing.”

Marable added: “Her positivity is contagious.”

Holland first joined the organization about 12 years ago.

She admits she didn’t know much about the various non-profits in Murfreesboro and Rutherford County, but she credits Junior League with providing unmatched training and education for its members.

She joined the Junior League’s board of directors six years ago and has served in various roles. Holland currently serves on the nominating committee, which makes her own nomination even more surprising and special to her.

“Normally I’m on the other end of nominating women who meet the criteria, never understanding that it was going to be me (this year),” Holland said. “When I opened that email, I thought, ‘Oh, we’re getting ready to submit our nominations,’ and then I said, ‘Wait, this is addressed to me.’”

She added: “It’s been a whirlwind. I never thought of myself in this league. I told Ms. Marable that I felt I was out of my league, but she said, ‘No you are not. Educators should be in the front.’”
Tags: Lascassas news Rutherford County school schools teacher
Sections: News