UPDATE: Man arrested in 2020 homicide in Murfreesboro to file plea this month 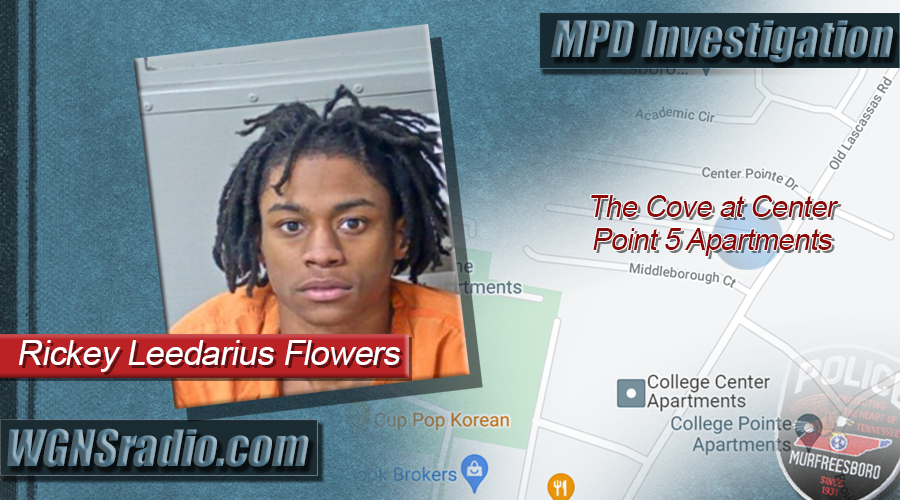 Murfreesboro, Tenn. – UPDATE: A First Degree Murder suspect arrested in Murfreesboro will face the courts later this month on August 25, 2021.

Rickey Leedarius Flowers of Murfreesboro, was arrested June 15th on a sealed indictment filed by a Rutherford County Grand Jury.  Flowers is charged with the first-degree murder of 19-year-old Jaylen Spears of Nashville. Detectives say the murder took place last year (2020) in the parking lot of The Cove at Center Point 5 Apartments on Old Lascassas Road.

Flowers, who was arrested on June 15, 2021, remains jailed at the Rutherford County Adult Detention Center.  The 19-year-old is scheduled to file a plea before Judge Barry Tidwell on August 25th at 9AM. In addition to a first-degree murder charge, he also faces charges of especially aggravated robbery and carrying a weapon with the intent to employ during an offense.

Murfreesboro, Tenn. – A man was found shot to death in a car in the parking lot of a Murfreesboro apartment complex Friday morning, June 19, 2020.

Murfreesboro Police Department (MPD) officers responded to The Cove at Center Point 5 Apartments, 1203 Old Lascassas Road, to an unresponsive man in a running vehicle around 5:24 a.m. this morning. Officers discovered the man had been shot multiple times and was pronounced deceased on scene by personnel with Rutherford County Emergency Medical Services and Murfreesboro Fire Rescue Department.

Detectives with the Criminal Investigations Division are attempting to identify the man and figure out the circumstances that led up to the shooting.