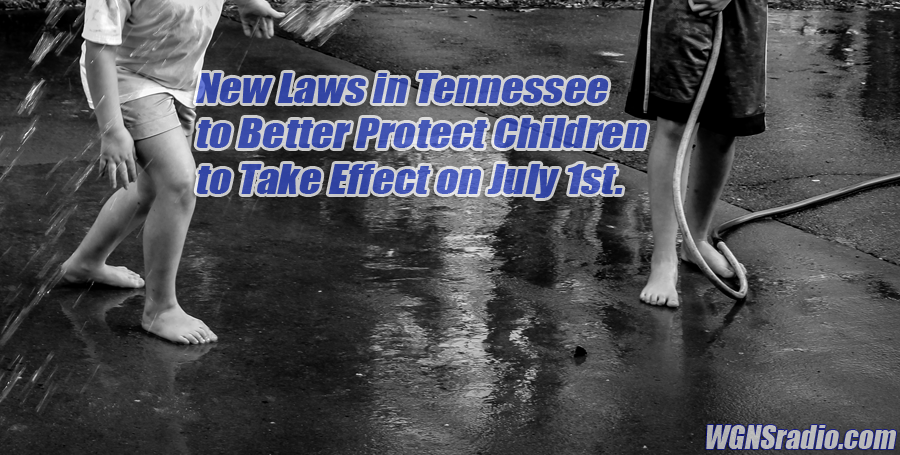 Several new laws protecting children are set to take effect on July 1 in Tennessee.  This includes major Truth in Sentencing legislation ensuring parole and probation are not options for those found guilty of certain violent crimes that historically target women and children.  These crimes include child abuse, child sexual abuse, felony solicitation of a minor and producing child pornography.  It is sponsored by Lt. Governor Randy McNally and Judiciary Committee Chairman Mike Bell (R-Riceville) in the Tennessee Senate.

“This Republican majority has always made cracking down on crimes against children a priority,” said Lt. Gov. McNally.  “This year has been no different.  Part of criminal justice reform is drawing a bold, bright line between those crimes for which we can show mercy and allow some flexibility in sentencing and those we cannot.  Crimes against children simply cannot be tolerated. A society that does not protect its children is not worthy of calling itself one. I am proud of all the legislation we passed this year specifically to protect children and commend the sponsors for their excellent work.”

ADVERTISEMENT
July 1 also marks the enactment of  Evelyn Boswell’s Law which provides that parents in Tennessee who do not report children missing to law enforcement within 24 hours could face Class A misdemeanor charges.   Sponsored by Senator Jon Lundberg (R-Bristol), the legislation was named after a Sullivan County 15-month-old who was found dead after her mother failed to report her missing to the authorities for months.

Lundberg also sponsored Eli’s Law, which will also take effect on Thursday.  It was named after a child subjected to traumatizing levels of parental abuse, even though his older brother had been removed from the parents’ custody for both neglect and abuse.  This legislation helps prevent such tragic situations by giving the court that previously decided the first child’s case the ability to take further action needed to protect children.

Protection of children is the impetus of another law that will go into effect July 1 requiring adoptive parents receiving subsidies to annually provide the Department of Children’s Services (DCS) with medical or school enrollment records in order to ascertain a health check.  The new law was passed after the horrific deaths of two Roane County children.  The arrest warrant said the children were caged in isolation and fed a “starvation diet of light bread and water” by their adoptive parents.  Authorities believe the children were buried several years before discovery, while the adoptive parents continued receiving financial benefits.  Sponsored by Senator Ken Yager (R-Kingston), it authorizes DCS to initiate a face-to-face visit if the adoptive parent fails to provide the documentation and foul play might be suspected.

Other child protection laws that will take effect on Thursday include:

• A new statute sponsored by Senator Bell requiring a person convicted of the facilitation of rape of a child or aggravated rape of a child serve their full sentence, followed by community supervision for life;

• A new law sponsored by Senator Dawn White (R-Murfreesboro) removing the statute of limitations for any commercial sex trafficking offense committed against a child on or after July 1, 2021 as many victims don’t immediately report due to trauma or fear of retaliation;

• Legislation sponsored by Senator Paul Rose (R-Covington) which ensures that a juvenile convicted of conduct that would constitute rape if committed by an adult cannot work or volunteer at a place that is in close or frequent contact with children;

• A new law sponsored by Senator Kerry Roberts (R-Springfield) expanding the definition of “severe child abuse” to involve a child’s exposure to certain extremely dangerous or illegal drugs; and

• A new law sponsored by Senator Paul Bailey (R-Sparta) which expands the definition of child neglect and endangerment to include the exposure of a child to methamphetamines and other dangerous drugs.