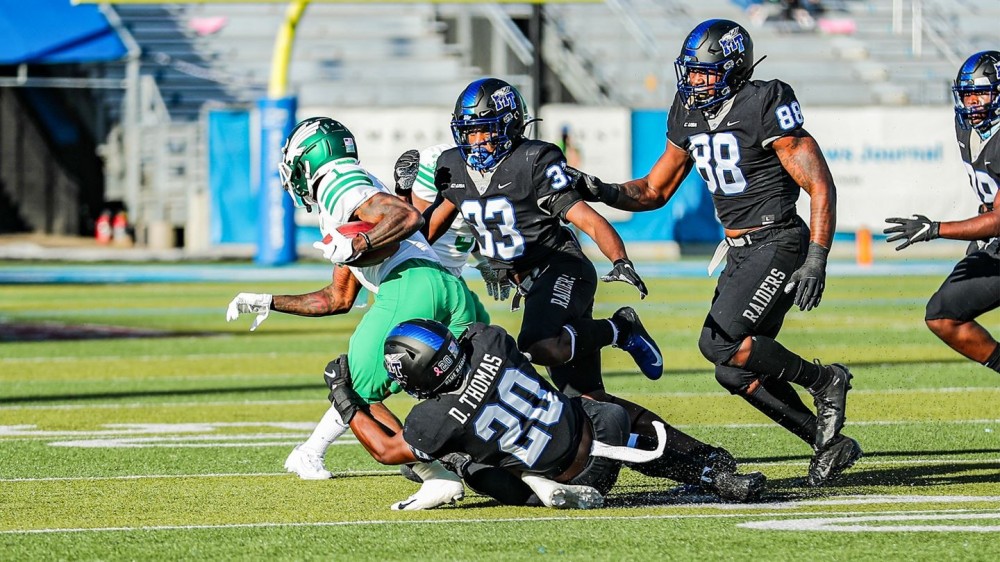 MURFREESBORO, Tenn. — Tweaks, changes, and adjustments are all staples of off-season programs for football teams around the country.

And those football "teams" include the NCAA Football Rules Committee, who have announced a plethora of updates to the existing rulebook ahead of the 2021 season.

With major changes to rules concerning targeting penalties, wedge blocking, and number sharing have been implemented in the past couple of the seasons, this year's roundup of changes can better be described as tweaks to existing rules and procedures. The most major of the rule changes, after all, only comes into consideration in the event of a game going into double overtime.

Here's some of the rule adjustments Blue Raider fans can expect on the gridiron this season.

Following the NCAA's seventh ever seven-overtime game in 2018, a 74-72 thriller between Texas A&M and LSU, the rules committee has been constantly adjusting the rules to decrease the amount of extra plays student athletes would have in overtime.

"The whole premise of doing that was the safety of the players," Middle Tennessee head coach Rick Stockstill said. "I've never played in a five or six overtime game, but other teams have, and the toll the extra plays puts on your players? I get it."

Most fans are familiar with College Football's basic overtime rules since the NCAA added an overtime procedure in 1996: each team gets the ball for one possession starting at their opponent's 25-yard line with no game clock, only a play clock running. After exchanging possessions, if the teams remained tied, the procedure would repeat, with the only twist being that teams were required to exclusively go for two-point conversions after touchdowns starting with the third overtime period.

In 2019, in large part to prevent these longer overtime games, the NCAA added a twist in the fifth overtime, teams would simply trade off two-point conversion attempts from their opponent's three yard line.

Now, those same variations are being shifted even earlier in overtime periods, requiring mandatory two-point conversion attempts following touchdowns starting with the second overtime, with the two-point attempt shootout starting from the third overtime onward.

From a coaching perspective, Stockstill says that his team will likely spend a little more time each week in practice working on two-point plays, both to have them ready in regulation and to be prepared for a longer overtime game.

Coach Stockstill has seen it happen before. His up-tempo offense is cruising after a big gain, moving up field to get set for a no huddle attack. The defense is trying desperately to get a play call in, maybe sub on a new player, when the whistles suddenly blow.

Dubious injuries popping up at seemingly opportune times to slow down a no-huddle offense have long been a point of discussion among college football fans nationwide. Most agree that moments when a player suddenly falls to the ground seemingly hurt, sits out a play, only to return to the field just a snap later, are at the very least suspicious. But, with the desire to make sure players remain safe, enforcing existing rules on unsportsmanlike conduct in these situations are tough for the officials on the field.

With the recent changes, however, both coaches and administrators can ask the National Coordinator for Officials for a video review of incidents post game, who will then "communicate any findings with the Director of Athletics at the institution for further action."

"I don't think they've determined yet what the ramifications are gonna be," Stockstill said. "Are they gonna say 'that player has to miss something,' or are they going to penalize the head coach? They haven't come up with a punitive system yet."

Still, Coach Stockstill is encouraged by the ability to just review it, understanding the challenges that come with enforcing the rule for in-game officials.

"I think it's good for the game, for the integrity of the game," Stockstill said.

In that vein, many of the more minor points of emphasis in the upcoming season concern various unsporting behaviors, including new additions adding video board and light operators to those who can be penalized for causing distractions, as well as increased emphasis on existing coaching box and taunting policies.

One slight holdover from last season is the extension of the sidelines for teams to be from 20-yard line to 20-yard line, a ten yard total expansion from the 25-to-25 standard that preceded it. The sideline was extended to each team's 15-yard line in 2020 to assist with social distancing protocols.

Finally, uniform policies have been updated to prevent t-shirts worn underneath jerseys from not being tucked in or extending beyond the waistline.