Tennessee Population Grew 17th Most in U.S. Since 2010 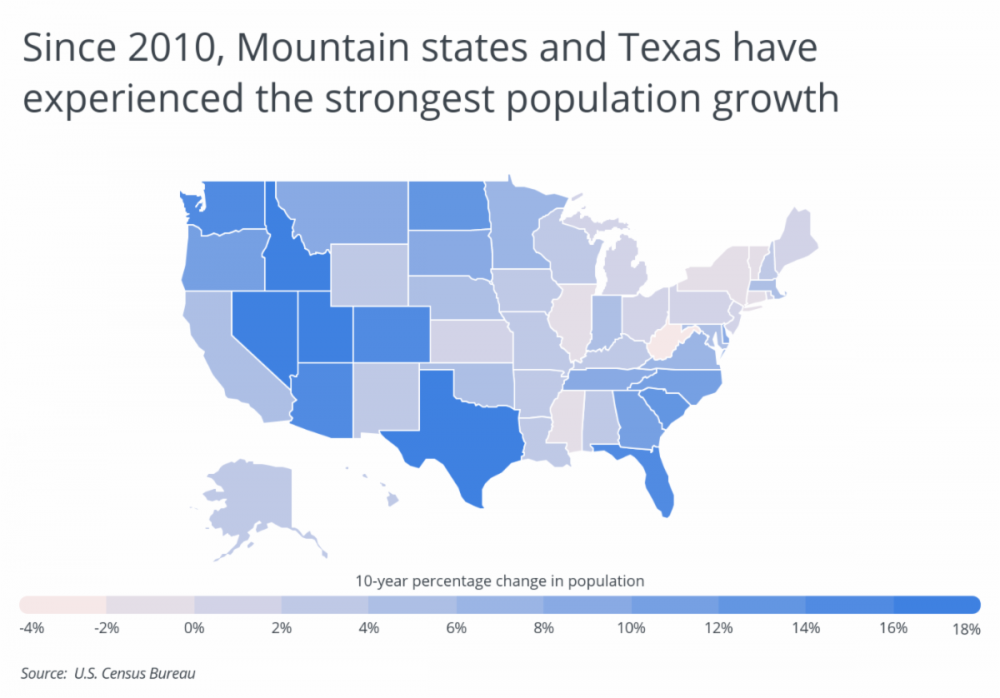 With less natural population growth and decreased immigration, the population of the United States has been growing more slowly every year since 2015, according to new Census Bureau estimates. In fact, the 0.35% growth rate between 2019 and 2020 represents the lowest growth rate in more than a century.

America is now an aging nation, as the age brackets for residents 55 and older are expanding at a pace that far exceeds the younger brackets. Over the past decade, the population of retirement-age residents (65 to 74 years old) soared 48.9% according to Census figures, while those 75 or older grew 24.1%, and those 55 to 64 increased 15.3%. In comparison, the total U.S. population increased by just 6.5% over the same time period, with certain age cohorts experiencing a population decline.

Such dramatic demographic shifts have reshaped the makeup of entire regions, states, and cities as the eldest generation increasingly moves from traditional job havens across the Rust Belt and Northeast to more retirement-friendly locales in the West, Southwest, and Southeast. The growth in housing units over the last 10 years exploded in states like North Dakota (thanks also to the fracking boom), Utah, Idaho, and Texas—all of which reported a roughly 15% or more increase in residential units, according to Census data. New home construction has also been a hot trend in Washington, the Carolinas, South Dakota, and Nevada.

When it comes to population growth, though, the Southwest is the clearest beneficiary of America’s changing demographics. While West Virginia, Illinois, New York, and a few New England states actually shrunk over the last decade, nearly all states between Washington and Texas expanded significantly. Utah led the way at 17.1% population growth between 2010 and 2020, followed by Texas (16.3%), Idaho (16.3%), Nevada (16.1%), Arizona (15.8%), Florida (15.3%), and Colorado (15.1%). Among the most-cited reasons for migration to these states are a lower cost of living and more favorable business conditions. The interior western states have also gained from residents moving out of California.

To find the states that grew the most over the past decade, researchers at Porch calculated the difference between their 2010 and 2020 populations as reported by the U.S. Census Bureau.

For more information, a detailed methodology, and complete results, you can find the original report on Porch’s website: https://porch.com/advice/cities-that-grew-the-most-over-the-past-decade