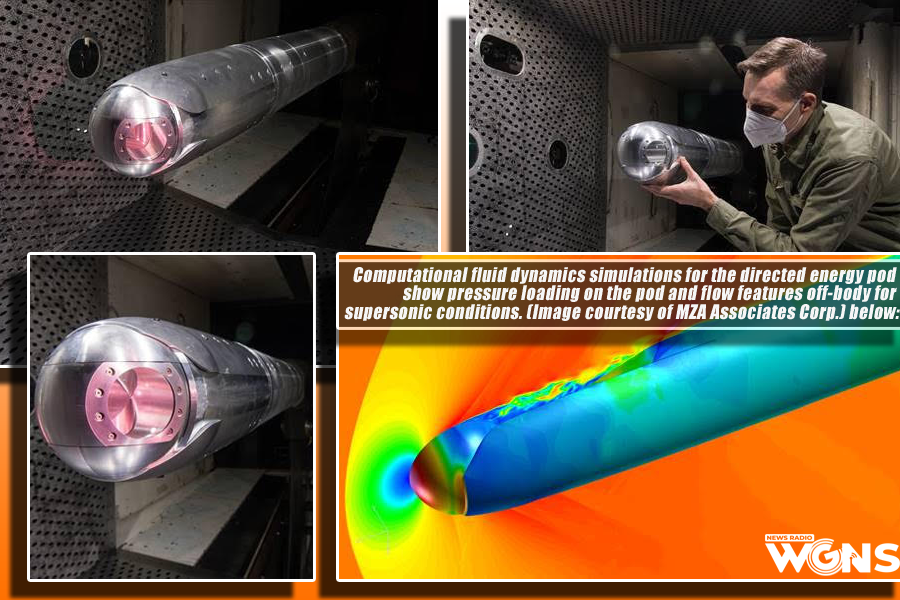 A directed energy (DE) system turret is positioned on a sting in the 4-foot transonic wind tunnel at Arnold Air Force Base for testing by the Aerodynamics Test Branch of Arnold Engineering Development Complex, March 5, 2021. Aero-optical wind tunnel testing of a DE system is a new capability for AEDC. (U.S. Air Force photo illustration by Jill Pickett)(The appearance of a glow from a laser was simulated for this photo.)

The Aerodynamics Branch of Arnold Engineering Development Complex at Arnold Air Force Base is helping the Air Force take directed energy (DE) systems airborne. The base is located in the nearby area of Tullahoma, Tennessee.

DE systems use high-energy lasers or microwaves to degrade or destroy threats and targets.

ADVERTISEMENT
“There is a growing interest for directed energy systems within the DOD [Department of Defense] for many purposes, especially defending our systems and personnel,” said Dr. Rich Roberts, chief of the Aerodynamics Branch Store Separation Section. “There are a number of systems in use and being developed across the DOD. Integrating the DE systems on aircraft has obvious benefits but also creates challenges, especially at higher speeds.”

During flight, an aircraft creates shockwaves in the air and other aero-optics flow disturbances that can affect the beam quality and effectiveness of a DE system. Wind tunnel testing allows test engineers to visualize and measure these changes to the airflow while controlling variables such as Mach number and altitude pressure.

A DE test conducted recently in the 4-foot transonic wind tunnel, or 4T, is the culmination of approximately eight years of work. AEDC engineers have worked with MZA Associates Corp. through Small Business Innovative Research, or SBIR, and Commercial Readiness projects to develop the Aero Isolation Measurement System, or AIMS, to enable aero-optical DE testing in the wind tunnels.

“Simply put, this system transmits a laser to the model, uses a miniaturized optical bench of sorts inside the model, then uses fiber optics to pipe the data to a wave front sensor system,” Roberts said. “From there, we can analyze data that tells us how the laser was impacted by the tunnel flow field around the model.”

MZA also was the customer for the recent test. The company has been working with the Defense Advanced Research Projects Agency on a supersonic aero-mitigation project with the goal of lessening the impact of high-speed flow over a turret. A prototype of a flow mitigation fence was tested in 4T.

“We are looking at how well this design controls the air flow over the turret to minimize the impact moving air has on the performance of the system,” Roberts said. “We are also comparing tunnel test data to previously generated CFD [computational fluid dynamics] data to make sure the simulations properly represent actual data. This test in 4T was the first time that this system has been experimentally tested at supersonic conditions, in addition to the first time that the AIMS system has been used at AEDC. The test went very well, getting all the priority data over two days of testing. An initial look at the data shows a significant improvement in beam quality using this new aerodynamic fence design.”

Building on this new capability, AEDC is working through a SBIR project to develop the Integrated Directed Energy Aero-Optical Surrogate, or IDEAS, which is a subscale model of an F-15 aircraft with the ability to test laser pods. The IDEAS hardware is scheduled to undergo acceptance testing later this year.

“The ability to perform aero-optical tests of directed energy systems in the wind tunnels represents a new test capability for AEDC,” Roberts said. “As more DE systems are developed and integrated onto aircraft, we’ll be able to help with design decisions, creating employment envelopes, defining adjacent weapons load outs and other things routinely needed by program offices and manufacturers.”