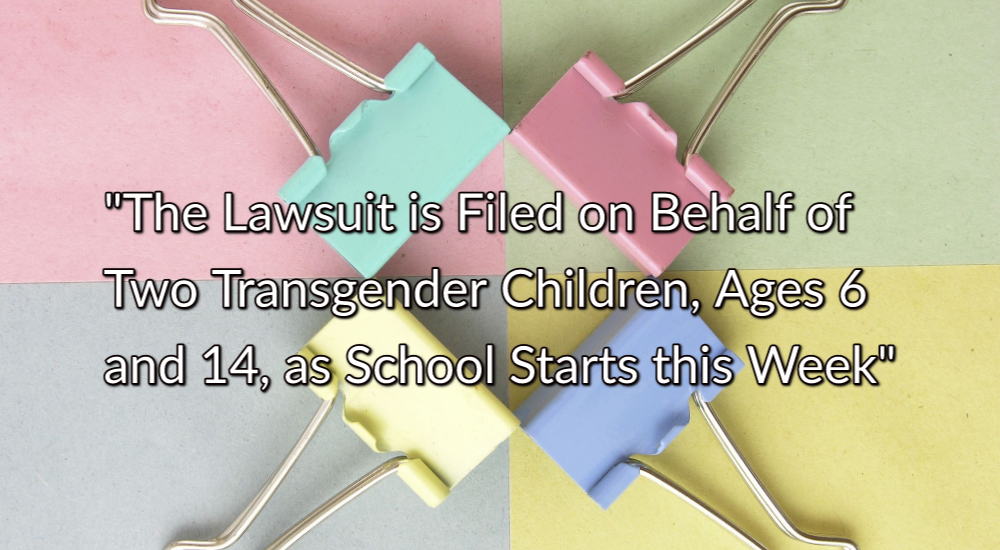 Tuesday,  the Human Rights Campaign (HRC) Foundation, the educational arm of the nation’s largest lesbian, gay, bisexual, transgender and queer (LGBTQ) civil rights organization, joined by the law firms of Linklaters and Branstetter, Stranch, & Jennings PLLC, filed a federal civil rights lawsuit in the District Court for the Middle District of Tennessee challenging a discriminatory law that denies transgender students, faculty, and staff access to the bathroom, locker rooms and other sex-segregated facilities consistent with their gender identity. This is the third lawsuit filed by the Human Rights Campaign Foundation.

This year, Tennessee enacted five anti-transgender laws after its legislative session and one of those laws, the “Business Bathroom Bill,” has already been preliminarily enjoined by a federal court.

“The common thread that ties our legal challenges together is our commitment to protect our community’s most vulnerable—children. The Tennessee law, which denies transgender young people the ability to use to facilities consistent with their gender identity, is not only morally reprehensible but devoid of any sound legal justification and cannot withstand legal scrutiny,” said Alphonso David, Human Rights Campaign President. “Courts have time-and-again ruled against these dangerous and discriminatory laws and we are going to fight in court to strike down this one and protect the civil rights of transgender and non-binary young people. With our representation of two transgender kids today, we are sending a strong message of support for all transgender and non-binary children across the country— you matter, and your legal rights should be respected.”

The case is brought on behalf of 14-year-old Alex* and his parents, Amy A. and Jeff S., as well as 6-year-old Ariel* and her parents, Julie and Ross B. Alex is excited to start high school this fall where he will be an honor student. His family relocated to Tennessee in 2018 to build their ‘forever home’ in an incredibly supportive and tight-knit neighborhood and Alex takes pride in being involved in his community and has created strong friendships among his peers at school. He came out as transgender before the 7th grade, however, in 7th grade he was not allowed to use the boys’ restroom. Instead, Alex was forced to either use the school nurse’s private bathroom or the restroom that corresponded to his gender assigned at birth—not due to statewide legislation, but instead due to the school policy. Both options were alienating and isolating for Alex who instead stopped drinking liquids at school to avoid having to use the facilities.

“When I started 7th grade, I just wanted to blend in. Having to use a “special” bathroom made me stand out because other kids would wonder why I didn’t just use the boys’ bathroom,” said Alex. “It was also a pain because the bathrooms I was allowed to use were not close to any of my classes. So, I just stopped having anything to drink during the day. It stresses me out that I’ll have to deal with this all over again at my new school.”

Due to COVID-19 pandemic-related issues, Alex transferred to a private school for 8th grade that affirmed his gender identity, including permitting access to the boys’ restroom—Alex enjoyed a great year, without incident. He is also looking forward to starting high school at the public school near his home, but due to Tennessee’s discriminatory bathroom law, Alex will again be forced into using restrooms that are stigmatizing or forgo using the bathroom altogether. To protect Alex, Amy and Jeff are considering moving from their beloved community and leaving their ‘forever home’ behind out of fear for Alex’s safety at school and emotional wellbeing.

“We didn’t know we had a trans child when we relocated to Tennessee—if Alex had come out to us before the move, we wouldn’t have come here,” said Amy and Jeff. “It makes me so angry that our elected officials have chosen to target trans kids. If lawmakers were to take the time to get to know my son, they would see that he is an amazing, smart, caring, creative person who has so much to offer. Alex just wants to be a regular kid. He should be able to look forward to starting high school without the added layer of anxiety about something as basic as using the bathroom.”

Similar to Alex, Ariel 's family built their ‘forever home’ from the ground up in a neighborhood they fell in love with and that fills Julie, Ross, and Ariel with happiness and friendship. Ariel began expressing her gender identity at 2 years old and when she was nearing 4 years old, Julie read the children’s book “I Am Jazz,” to Ariel that tells the story of a transgender girl. When the main character explains that she “has a boy body with a girl brain.” Ariel immediately lit up with excitement and eagerly told her mother, “that’s me, momma, I have a boy body with a girl brain.”

“[Using the boys’ bathroom] would make me feel weird cause I'm a girl, not a boy,” said Ariel.

Since Ariel began her social transition at 4 years old, her classmates, their parents, teachers and school administrators have only known Ariel as her authentic self. When she was enrolled in kindergarten, her school was receptive and understanding of her gender identity and has largely protected Ariel from stigmatizing experiences. In anticipation of Ariel starting 1st grade at a different school this fall, Julie reached out to the principal to discuss accommodations for her daughter. Since Tennessee’s bathroom law is enacted, Ariel will have to use the boy’s restroom or the private nurse’s bathroom despite only ever using the girl’s restroom. Due to her young age, Ariel does not understand the law’s ramifications or why she is being told to use the boy’s bathroom. Julie and Ross are also considering moving out of Tennessee due to these anti-transgender laws out of fear for their growing daughter.

“The state's political leaders are making Tennessee a dangerous place for our daughter, and other children like her. We are extremely worried about her future here, and the bills that are being passed have put us in panic mode,” said Julie and Ross. “They are attacking children that cannot defend themselves for what appears to be political gain over a non-existent problem. We wish our leaders would take the time to speak with transgender youth and adults—instead, their fear of the unknown is unnecessarily leading their actions and causing irreparable harm to these children.”

The plaintiffs allege that the Tennessee law violates Title IX of the Education Amendments of 1972; Title IX expressly prohibits discrimination on the basis of sex in federally funded education programs. The Department of Justice also recently issued a memorandum affirming that Title IX of the Education Amendments of 1972 prohibits discrimination on the basis of gender identity and sexual orientation in federally-funded education institutions, including public schools. The lawsuit also alleges that the law violates the Equal Protection and Due Process Clauses of the U.S. Constitution. Earlier this month, the U.S. Supreme Court’s decision to deny certiorari in Grimm v. Gloucester County School Board left in place a federal circuit court decision recognizing the rights of transgender students under the Equal Protection Clause and Title IX.

“We are determined that a brutal legislative session that especially targeted transgender and non-binary youth will not be the last word,” said Chris Sanders, Executive Director of Tennessee Equality Project. “Justice demands that we fight for the constitutional guarantee of equal protection. So we are proud to support the Human Rights Campaign as they make sure Tennessee students will have their day in court.”

Analyses conducted in the aftermath of previous divisive anti-transgender bills across the country, like the bathroom bills introduced in Texas and North Carolina show that there would be or has been devastating economic fallout. In 2016, North Carolina passed HB 2, termed the most anti-LGBTQ legislation that year, and The Associated Press projected that the North Carolina bathroom bill could have cost the state $3.76 billion over 10 years. Furthermore, HRC and Hart Research Group conducted a 10-swing-state poll in 2020 that found at least 60% of Trump voters across each of the 10 swing states say transgender people should be able to live freely and openly. In response to the rash of anti-transgender laws being passed this year, HRC Foundation announced an additional lawsuit in Florida as well as a series of upcoming legal challenges in Arkansas and Mississippi—more information will be announced regarding that litigation later this summer.

“We are proud to support these children alongside the Human Rights Campaign on this important pro bono project,” said Adam Lurie, Head of Linklaters’ U.S. Dispute Resolution Practice. “There’s no place for this anti-LGBTQ legislation anywhere in the United States.”