50+ Pounds of White Powder, Presumed to be Fentanyl, Seized from Truck 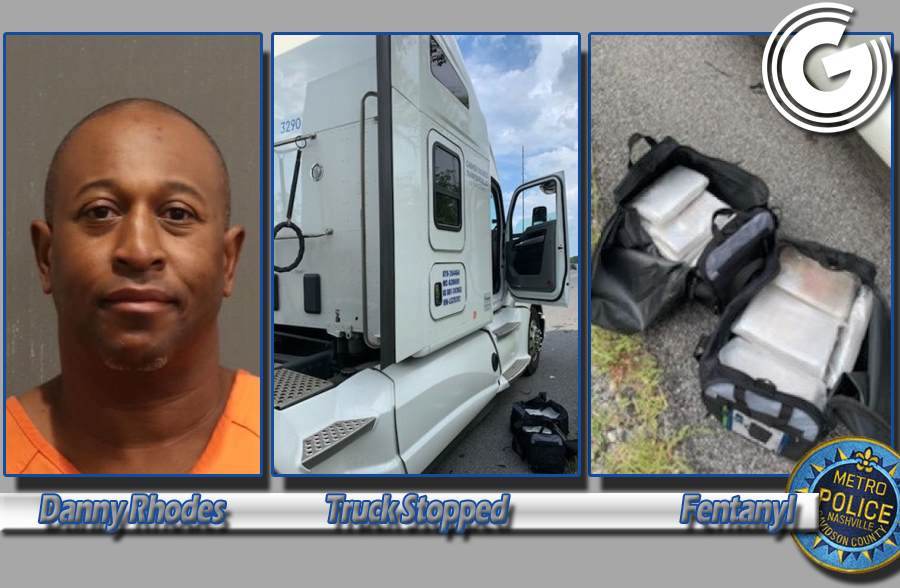 More drugs are off the streets of Middle Tennessee, thanks to a recent traffic stop in Music City.

The traffic stop of a tractor-trailer on I-40 in West Nashville on Thursday (08/12/21) led to the seizure of more than 50 pounds of white powder, presumed to be fentanyl, in two bags found in the sleeper area of the big rig. The powder was found after a Metro Nashville Police Department K-9 named Boston alerted to a drug odor.

ADVERTISEMENT
The truck driver,48-year-old Danny Rhodes of El Paso, Texas, is in custody and is expected to be charged federally.

Dangerous fentanyl is frequently linked to fatal drug overdoses. Fifty pounds of Fentanyl has the potential to kill millions of people and has a street value of approximately $800,000.

DRUG REPORT FROM THE TBI:

It is estimated that there are about 800 methamphetamine labs operating at any given time in the Tennessee. The consequence of meth use is devastating, causing irreversible and serious damage to the body, environmental damage from toxic chemicals, and thousands of dollars in lab clean-up costs.

But the drug that law enforcement officials in Tennessee are increasingly concerned about is heroin. While methamphetamine use in Tennessee has leveled off somewhat, heroin use is back on the rise. The heroin influx could pose an even bigger problem, with more deadly repercussions, because the drug is sometimes laced with an even more powerful and dangerous narcotic called fentanyl. Fentanyl is a synthetic opioid used for severe pain, and is exponentially more potent than heroin. Pure fentanyl is so deadly it can prove fatal if simply absorbed through the skin. The effects of overdose can range from breathing problems to death.

Now, not only those using and abusing drugs are facing risks from drug use; Law enforcement personnel are also potential victims. TBI crime labs have received several samples of heroin laced with fentanyl and pure fentanyl packaged as heroin. In 2014, the TBI launched a program to provide handheld auto-injectors to Agents and Forensic Scientists in the labs who may come into contact with fentanyl.

A disturbing new discovery is compounding the problem of fighting drugs in Tennessee. Law enforcement agents recently recovered what appeared to be oxycodone pills during a traffic stop, with the same size, appearance and stamp of oxycodone. But a lab analysis determined these pills were counterfeit. They did not contain oxycodone, but instead contained fentanyl. The safety concern of this discovery is so great at the TBI issued a warning about this potentially dangerous drug recovery.

The concerns are not limited to illegal narcotics. Prescription drug abuse is causing increasingly serious problems in the state. Tennessee is ranked third in the country for prescription drug abuse, and cuts across demographics. Studies show that about 5% of Tennesseans have used pain relievers in the past year for non-medical purposes, and more than 70% of people who use prescription drugs for non-medical reasons got them from a friend or relative. The abuse of prescriptions drugs is having disastrous consequences in the state, including overdose deaths, increasing hospital costs and emergency room visits, children being put in state custody, and incarceration of drug-related crimes.

While the dangers of illegal drugs and abuse of legal drugs continues to change, it is incumbent upon law enforcement officers -- and the public -- to be vigilant in their fight of these substances. It requires an increased understanding of the dangers presented, as these drugs now not only present a threat to those using them, but also to those fighting the use.