After suffering from COVID-19 isolation, PTSD and addiction, Veteran finds his way back to living life 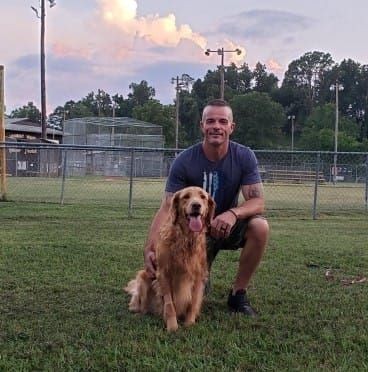 Sims with his dog

After a week of trying to cope and self-medicate his post-traumatic stress disorder with substances, Army Veteran Michael “Todd” Sims returned to his Chattanooga home. Unlike previous times where he would leave for a few days and his wife and children clung onto his unexpected arrivals, he returned to an empty home.

No children. No wife. Just a building that housed their memories.

ADVERTISEMENT
He had been home for more than a year after serving in Iraq and was struggling to cope with the effects of war. In a moment of despair, Todd found himself in front of the cabinets and began swallowing what remained of his medications.

“I thought, ‘No more pain. No more memories, nightmares, struggles or disappointments that I had experienced since returning home from the war,’” he said. “It was finally going to be over. I wrote a letter to my kids telling them I was sorry, and I laid down on the floor expecting it to all be over.”

Although he doesn’t remember much, Todd called his eldest son which led to his neighbors running into the home and finding Todd unconscious on the floor. The Army Veteran was transported to an intensive care unit where he stayed for several days and started getting treatment from Tennessee Valley Healthcare System.

The struggles of normal life after a deployment

The Chattanooga native served as a cavalry scout from 2001 through 2006 and deployed to Iraq in 2004. A cavalry scout performs reconnaissance missions that ventures into dangerous areas to gather intel about terrain, enemy forces, and other events.

Todd said when he returned home from the war, he faced many unexpected struggles that he wasn’t prepared for nor expecting to handle. He admits that even his family saw him as a totally different person.

“I started isolating myself from everyone and became angry and short with everything,” he said. “I was having nightmares and moments of visually being back in a place I thought I had left. Not knowing much at all about PTSD and the effects of war, I just pushed it off hoping it would pass and shrugging it off like I was trained.”

In 2007, after being back home for almost a year, Todd was introduced to methamphetamine. He said the substance made him feel alive and energetic, and he was more social rather than staying isolated. As a result of the substance use, he began skipping his medications and appointments but didn’t realize he was losing control.

“I started finding myself needing it, not just wanting it,” he said. “I started indulging in a lifestyle of drug use and I wasn’t concerned about my family, my children, or anyone that cared for me, including myself. I was self-medicating myself into a downward spiral.”

The mental war is real

After returning to his empty home and attempted suicide, a now-sober Todd reunited with his wife, but they eventually divorced, which led to another relapse.

While coping with the divorce, Todd began associating himself with others who were heavily using substances and involved in criminal activities. He was arrested in 2011 and served almost eight years in federal prison.

“I was released in 2019, I was clean and relied my faith in God,” Todd said. “I got back involved with VA, got remarried, my children were back in my life. Things were going great, and then COVID-19 hit. It threw me for a whirlwind.”

Todd said the isolation from COVID-19 caused him to relive memories of being in Iraq for the first time since 2007. Although he remained clean during the pandemic, he was fighting an invisible enemy – his mental health and wellbeing.

“I will take a physical fight any day over a mental one because at least I can see what I'm swinging at or trying to fight against, but this mental war is real,” he said.

A blessing for Todd and his family

“I'm not going to tell you being in this program has been easy,” he said. “I have been given an opportunity to open many doors in my past, and I decided before I came in it was time to peel back some of these layers and allow myself to be vulnerable and get these struggles off my chest. I came in not knowing what to expect, but I knew nothing was going to stop me from getting to where I want to be.”

Todd explained how the treatment has made a real impact in his life and how the staff’s compassion has shined through their work. Todd feels he is in a better place mentally and physically due to his weight loss and coping mechanisms he learned from his treatment.

“The skills I learned are absolutely everyday life experiences,” he said. “The one-on-one time with my therapist has been a true blessing. The nurses and staff love their job and Veterans, and make this the best experience it can be for you. It’s structured to your needs not theirs, and they go above and beyond to give you the help you need in your recovery.”

By sharing his story, Todd believes he will help inspire other Veterans to seek help and start the conversation around issues like mental health, PTSD, and substance abuse.

“We [Veterans] know how tough war is and how hard battles are fought,” he said. “If we will take that same fight and determination into bettering ourselves, then just imagine where we can go. Although the war is not over yet, my battles are being won. It takes one day at a time. Don’t live in yesterday and don’t think about tomorrow. This has been a blessing for me and my family.”

If you or someone you know is struggling with PTSD or substance use disorder, help is available. Learn more about the Residential Rehabilitation Treatment Program here.