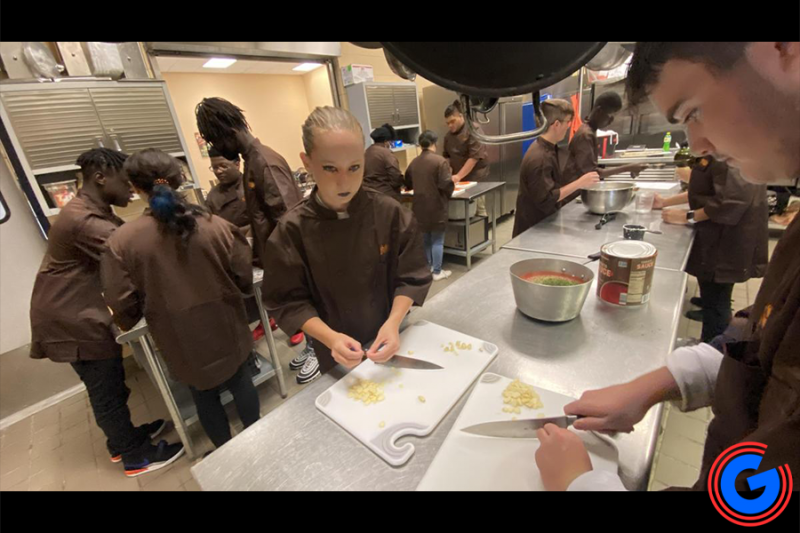 The Blackman High culinary program was one of a dozen schools throughout Middle Tennessee to receive in upwards of 300 of the 4,000 chef jackets donated by Cracker Barrel.

The chef jackets are short sleeve, made of thick material and vented to release heat off the back. Valued at $50 a piece, the donation saved the Blackman program an estimated $15,000.

“That’s a big expense for any program,” Pinnix said.

The entire donation was delivered to Lebanon High School in July, where each of the culinary instructors could arrange to pick up the new chef jackets prior to the start of the 2021–2022 school year.

There were enough jackets — valued at more than $200,000 — that Pinnix even helped a new culinary program in Louisville, Kentucky, to benefit from having a set of chef jackets for their culinary classroom.

Most students in the new Kentucky program come from low-income families.

“For culinary, we’re a tightknit group and we always want to make sure everybody’s taken care of,” Pinnix said, “and that we’re helping out each other. We all work with each other really well.”

The various programs are also rather supportive of one another’s success in competitions like the TN ProStart Invitational hosted by the Hospitality Tennessee Education Foundation. Like the Skills USA competition other career and technical education pathways participate in, ProStart is a statewide management and culinary competition followed by a national competition.

Blackman won the management and culinary competitions this past spring.

It is the first time a Rutherford County program won both competitions in the same year.

“This last year was a big year because we got first place,” Pinnix said. “With all the restrictions, it was rough.”

Consequently, the national competition was canceled.

“Every year, we try our best and if other schools win, we congratulate them as well,” Pinnix said. “We’re real good with sportsmanship with our culinary programs outside of Rutherford County as well as inside.

“We’re ready for this year.”