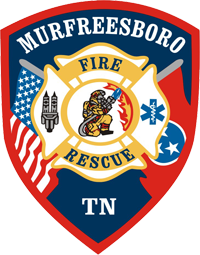 MURFREESBORO, Tenn. (August 30, 2021) – Murfreesboro Fire Rescue Department (MFRD) is asking residents to do their part to help prevent flooding and keep safety in mind as the aftermath of Ida approaches the area.  The storm is expected to dump two to six inches of rain in the city over a 12-hour period beginning Monday evening, Aug. 30.

“There is a 70 to 80-percent chance of seeing greater than three-inches of rain,” MFRD Chief Mark Foulks said.  “With that much rain in such a short period of time, there is a chance of significant flooding.”

If there is flash flooding, fire officials urge drivers to ‘Turn Around Don’t Drown.’

• Do not drive through high water.
• Do not move signs blocking a roadway.
• Have an evacuation plan if your home typically floods during heavy rains.

“It takes only a small amount of water to wash a vehicle off the road or stall a vehicle,” Foulks said.  “Fast-moving water can be dangerous and deadly.”

The City of Murfreesboro Public Works Department crews is spending the day clearing storm drains and making sure the city’s drainage system is free of debris.

Murfreesboro Street Department crews will be on stand-by to assist with flooding or downed trees if necessary.

Residents can also do their part to help eliminate flooding by preventing clogging of storm drains.

Below is a list of roads that typically are closed or monitored with significant rain events:

Storms are expected to move out of the area by Tuesday evening or Wednesday morning.

To report flooding, contact the Murfreesboro Emergency Communications Center at 615-893-1311.