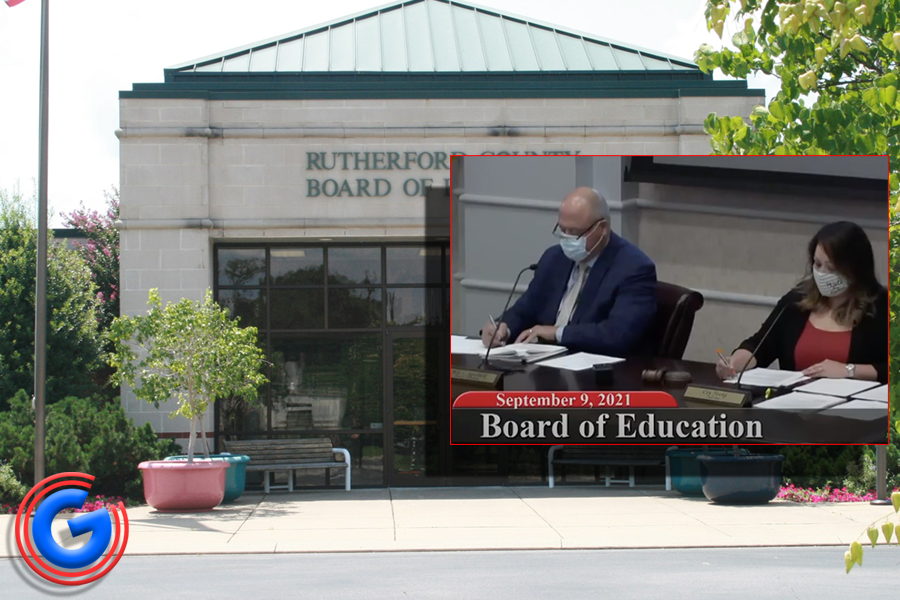 PHOTO: Director of Schools Bill Spurlock (L) and Tiffany Johnson (R) move on to the next item on the agenda moments after Johnson selected first woman to serve as chair of Rutherford County School Board.

PThe narrow margin of support does not mitigate the historical significance of Tiffany Johnson being selected to serve as the first-ever female chairperson for the Rutherford County School Board.

ADVERTISEMENT
Nominated by outgoing Chairman Coy Young — a move that received a second from Jim Estes — Johnson was selected by a 4-3 margin, yet her selection is the first for a Board that dates back several decades.

“People should be measured by the merit of their actions,” said Johnson, who added, “I realize that being a woman, this is obviously a historical situation.”

In addition to Young and Estes, Johnson also received a fourth vote of support from Shelia Bratton.

Bratton was selected 5-2 as vice-chair.

The primary purpose of the Board is to provide students of Rutherford County the best quality education, and that objective does not change as chairwoman, Johnson said.

She specifically talked about the top-notch career and technical education courses led by industry professionals that offer certifications as a source of community pride combined with the Tennessee HOPE Scholarships awarded to freshmen who are enrolled at an eligible postsecondary institution within 16 months after graduating from an eligible high school.

As a personal example, Johnson has two children who are studying medicine.

“We have no doctors in our family,” Johnson said, “but they were exposed to those opportunities — clinicals — in high school. I have a child who’s a freshman at Rockvale (High School) and is excited to go to school because he gets to participate in engineering.”

In comparison to a vast majority of other districts in Tennessee and throughout the rest of the country, those opportunities are unheard of, Johnson said.

“My purpose is to give our kids the best opportunities and … we’re doing that,” said Johnson, regardless of her gender.

She later added, “I didn’t set out to serve in that capacity, but when I was asked to serve, I’m happy to.”

Prior to being elected to represent Zone 4, Johnson previously earned a pair of bachelor’s degrees — one in history and another in political science — while raising seven children with her husband, Travis, and having served as the director of the Sam Davis House. She previously worked with the Tennessee State Legislature.

She has since earned a master’s degree in public administration with a certificate in nonprofit management.

“No matter where you start, it doesn’t have to define you,” said Johnson, who had her first child as a junior in high school and was pregnant with her second when she graduated and had a school counselor tell the teen, she “would never be more than a drain on society.”

Johnson continued, “You can make a difference regardless of what people tell you. I hope my daughters and every young lady sees this moment, not me, but sees themselves and the potential of being able to achieve things that others haven’t before them. More importantly, I hope they see the responsibility that comes with it. That you don’t just want to be in that seat, you want to do it well and you want to serve others in that process.”