COMMENTARY by Mike Sparks: WE The People should revisit the Importance of U.S. Constitution 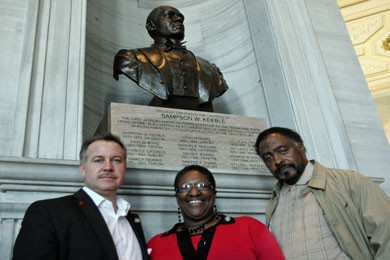 Recently on WGNS Rutherford Magazine Show heard Sunday nights at 5p.m. on 100.5 FM, 1450AM and online at WGNSradio.com I had invited guests Joni Bryan, Director and founder of the 917 Society, Nashville attorney Ramona DeSalvo and John Taylor, a Franklin realtor, both of whom are leaders with the Convention of States. Both leaders were in the studio to talk about the COS initiative for Constitution Day and how we all  can work together with others like 917 to share the Constitution with the next generation.

ADVERTISEMENT
I appreciate the passion and conviction of these three American Patriots and their grassroots efforts to bring much needed awareness to the importance of our United States Constitution.

I commend the 917 Society's mission to empower every 8th grader with the knowledge of their individual freedoms and provide them with their very own lasting copy of the U.S. Constitution as a "rite of passage" into American Citizenship and celebrate Constitution Day each September 17th.

You can listen to the Rutherford Magazine Show highlighting the U.S. Constitution and the efforts of the 917 Society at the link below: https://www.wgnsradio.com/article/70205/sunday-september-5th-2021-rutherford-magazine-show

Last year in 2020 I was honored to be invited to attend the 917 Society’s Fundraiser. I was glad to see many Tennessee state leaders speaking and in attendance—especially my friend Rep. John DeBerry. Sadly, John DeBerry, the 26-year state lawmaker, was removed from the ballot by the Tennessee Democrat Executive Committee.

Folks, I cannot make up the strange circumstance I have witnessed the past few years. The draconian measures by the Democrat party to remove DeBerry from the ballot — this is simply “Voter Suppression.” The irony is that the people of the house district 90 of Memphis sent DeBerry to Nashville to represent them 13 times.

"My district has elected me 13 times," DeBerry said after a House committee meeting. "Not just because I'm John DeBerry or because I'm a Democrat. But because they agree with what I fought for and what I stood for."

The Democrat Party statewide committee didn’t like DeBerry's voting record, which often aligned with Republicans on issues of a Pro-Life stance and his position of parents choosing their children’s educational needs—school choice.

The Democrat Party Committee’s effort to remove him from the ballot came after the filing deadline had passed, preventing DeBerry from filing again under another party.

When I first was elected to the Tennessee General Assembly I asked to meet with DeBerry. He was very gracious and shared with me that he had marched with Dr. Martin Luther King Jr. and was in attendance at the “I've Been to the Mountaintop" on April 3, 1968, at the Mason Temple in Memphis the night before the reverend and civil rights leader was killed.

“A democracy doesn’t have a tribunal that approves the candidate before the people get to approve a candidate and that’s what they did. Effectively, no matter how genuine their beliefs were or how sincere their motives may have been—what they said effectively was that district 90 didn’t have enough intelligence or information to make an informed decision and because I’ve been there so long and I’m well-funded I kind of drown out the other candidates and so it’s their job to get me out of the way so others can be heard and seen—which sounds a lot like what goes on in maybe some other countries—but not in America where each man and each vote counts.” Rep. John DeBerry

Speaking at the 917 Society event DeBerry went on to explain that America is a child of controversy, conversation and protesting. That’s who we are,” DeBerry said as he recalled being a young child and marching through Memphis with his father and Dr. Martin Luther King Jr. “I remember (the protesters) stood up to the dogs and the billy clubs, and they did it in a way that changed the world with class.

“We have taken for granted what those men and women, black and white, who put their lives on the line sacrificed. When we look around and see our voices muted for political correctness, we’ve got to wake up and use our voices again. ... Our greatest treasure is freedom, and we will defend it.”

DeBerry lamented that children have no idea how freedom came to be and the sacrifices that were made so many times.

“The Constitution is based on the greatest document ever written: the word of God,” DeBerry said. “We made our mistakes, but we went back to that book. When we looked at God’s word, we made that document malleable. It has matured and it is better. That document was not something that just changed America. It changed the world.”

The efforts of Joni Bryan, John DeBerry, Ramona DeSalvo, John Taylor and others demonstrate fearless leadership that is not always recognized or appreciated, but sorely needed. Society is always a work in progress.