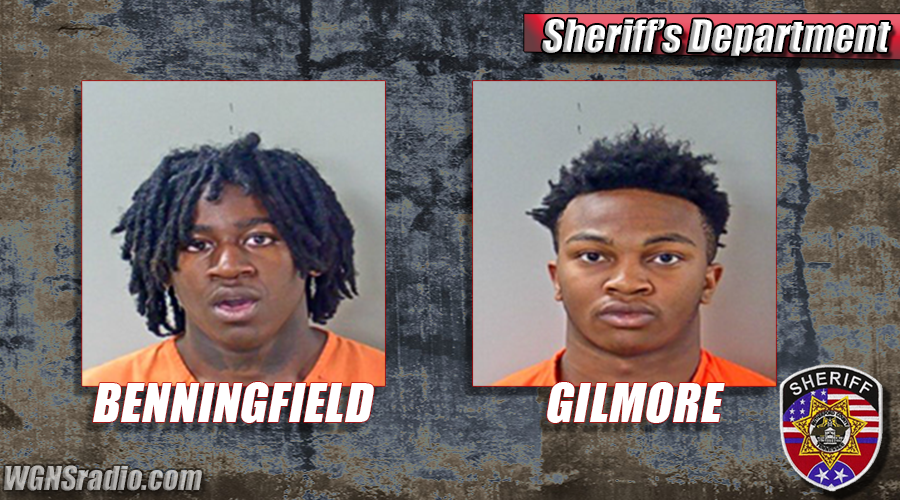 No one suffered injuries after a man allegedly fired a handgun in the air in a rear parking lot during the Stewarts Creek High School football game Friday, a Rutherford County Sheriff’s detective said.

The gunfire seemed to stem from a juvenile and her adult sister fighting other juveniles, said Detective Andrea Butler, who led the investigation. This occurred in the parking lot located at the opposite end of the football field.

ADVERTISEMENT
During the fight, muzzle flashes were seen in the air, she said. School resource officers identified the shooter as Malik Gilmore.

“Gilmore (allegedly) did fire his weapon in the air on school property,” Butler said.

Butler charged Gilmore, 18, of Legacy Drive in Smyrna Saturday with reckless endangerment and possession of a weapon on school grounds. He was booked into Rutherford County Adult Detention Center released on $12,000 bond. His hearing is set Nov. 9 in General Sessions Court.

The investigation showed suspects Santez Benningfield and a 17-year-old boy were involved.

Benningfield was with the juvenile who was seen running with a stolen, long-barrel firearm in the parking lot, the detective said.

“The juvenile matches the description as the one carrying the weapon at the parking lot,” Butler said.

Butler charged Benningfield, 18, of Summit Lane in La Vergne with possession of a weapon, theft and felony possession of marijuana Monday night.

He was booked into Rutherford County Adult Detention Center and released on $15,000 bond Tuesday. A hearing is set Nov. 29 in General Sessions court.

The juvenile was charged with possession of a weapon on school property and reckless endangerment Tuesday. He was booked into Rutherford County Juvenile Detention Center. A hearing is pending in Juvenile Court.

Director of Schools Bill Spurlock said the Rutherford County Schools’ system is grateful for the sheriff’s office responding so quickly and thoroughly investigating the incident to ensure all parties involved were identified.

“It is unfortunate that some of our youth resort to violence to resolve conflicts,” Spurlock said.  “As a school district, we will continue to actively remove students who engage in this type of behavior to preserve safe learning environments for our students.”

Butler thanked Smyrna Police and La Vergne Police who helped in the investigation.

“If students have further information, they should contact their SRO,” Butler said. “Our job is to protect students outside and inside the classroom.”