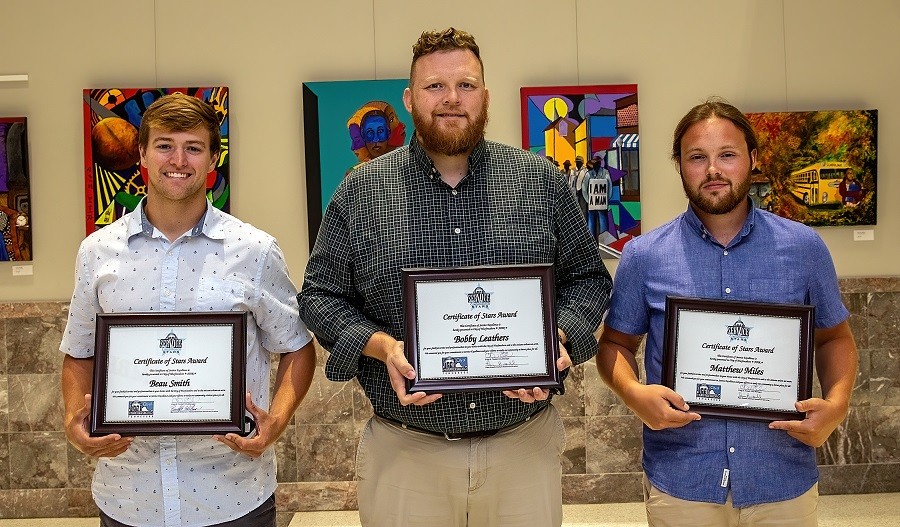 The following description by an employee nominated Beau Smith and Matthew Miles on July 8, 2021 for the STARS award:

ADVERTISEMENT
“On Monday, August 2, 2021, Bobby Damron was riding his bike on the Greenway when he had a wreck.  It was later found out that the wreck fractured his hip, disabling his ability to walk.  Shortly after his wreck, Beau Smith and Matthew Miles, both Groundskeepers for the Murfreesboro Parks and Recreation Department, found Mr. Damron while performing routine maintenance on the Greenway. Recognizing his need for help, they immediately stopped what they were doing and assisted Mr. Damron into a utility vehicle, along with his wrecked bike, and drove him to a nearby trailhead to meet Mr. Damron’s son.  Mr. Damron said, ‘As it turned out, I had a fractured hip and had surgery the next day to repair the fracture.  I am at home now and doing well because your employees took the time to help someone in need.’”

The following description by an employee nominated Bobby Leathers on July 1, 2021, for the STARS award:

“Bobby is always helpful with my IT problems, but he went above and beyond with my most recent issue.  I was on a recorded Zoom meeting Tuesday afternoon with valuable information I needed right away.  When I got the file form the meeting’s host, there was no content. Bobby took a look and realized it was just a shortcut.  He did some research and found that Zoom automatically downloads a folder onto the computer the meeting host is using.  He emailed the information to me to forward to the meeting host who was able to find the subfolder, sent it to Bobby to open in Dropbox, and then save on my desktop.  Now I’m able to view it as many times as I need to, pausing to take notes and screenshots, to complete my tasks.  I’m grateful for his expertise, patience, and work ethic.”

Bobby Leathers was hired in the Information Technology Department on Sept. 28, 2006.

STARS stands for “Succeeding Through Attitudes Reflecting Service Excellence.” They’re  examples of representing the City in a positive light, exhibiting the core values, and creating a better quality of life for citizens.

Congratulations to Beau Smith, Matthew Miles, and Bobby Leathers for being named recipients of the STARS Award for Outstanding Performance.