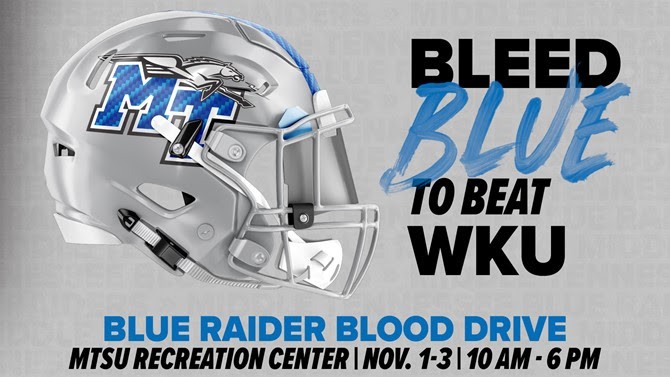 MURFREESBORO, Tenn. – As has become an annual event surrounding the football rivalry between Middle Tennessee and WKU, the two schools will take part in a blood drive battle leading up to the Nov. 6 game in Bowling Green.

Donors can give blood in support of their favorite school on the MTSU campus from Monday, Nov. 1 until Wednesday, Nov. 3 at the Rec Center, located at 1848 Blue Raider Drive in Murfreesboro on campus. Donation times will be 10 a.m.-6 p.m. all three days.

This year, the Red Cross has a new initiative to address the problems associated with Sickle cell disease.

This is a disease that negatively impacts the health of over 100,000 people in the U.S. that suffer from this condition. This is the most common inherited blood disorder, and the majority of patients are of African descent. Many patients with sickle cell disease will require regular blood transfusions to help manage their disease. Unfortunately, these patients may develop an immune response against blood from donors that is not closely matched to their own. Many individuals who are Black have distinct markers on their red blood cells that make their donations ideal for helping patients with sickle cell disease. More than half of blood donors who are Black have blood that is free of C, E and K antigens – making them the best match for those with sickle cell disease./

All donors have to do is give their sponsor code – MTSU – while donating blood. They'll also receive a commemorative Blood Battle T-shirt, pizza, and four free tickets to the Blue Raider football game against ODU on Nov. 20.

The Blood Battle winner will be announced at the Nov. 6 football game between the schools. The American Red Cross will present the trophy to the winning school at the game.

All blood types are needed to ensure a reliable supply for patients. A blood donor card or driver's license or two other forms of identification are required at check-in. Individuals who are 17 years of age in most states (16 with parental consent where allowed by state law), weigh at least 110 pounds and are in generally good health may be eligible to donate blood. High school students and other donors 18 years of age and younger also have to meet certain height and weight requirements.

Scroll down to see past years and winners...