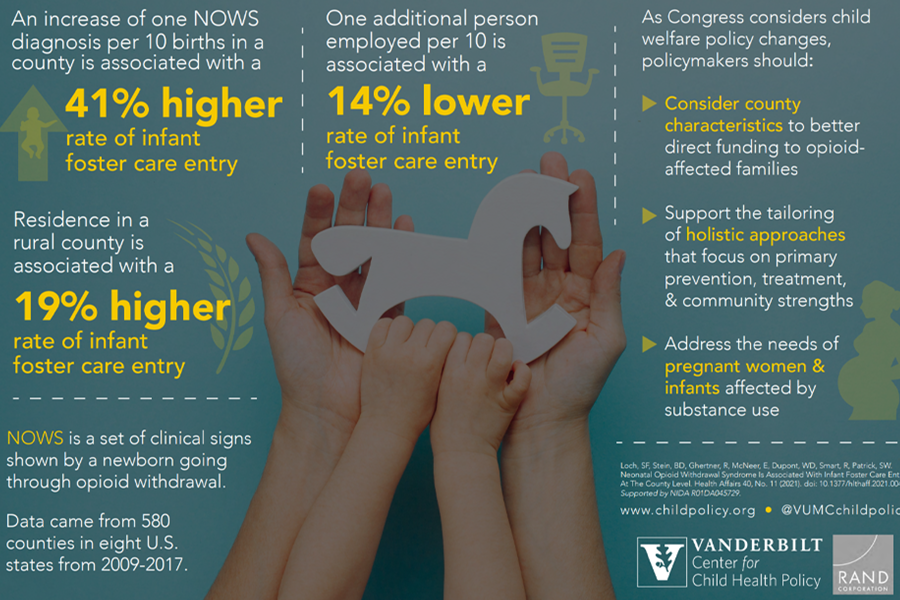 The number of infants diagnosed with neonatal opioid withdrawal syndrome (NOWS) and the number of infants entering foster care have both increased substantially over the past decade, and a study by the Vanderbilt Center for Child Health Policy has revealed the close relationship between the two for the first time.

The study published in the journal Health Affairs analyzed data from 580 counties in eight U.S. states from 2009 to 2017 to determine if there is a correlation between county rates of NOWS and the county-level rate of infants entering foster care. NOWS is a set of clinical signs newborns show when they go through opioid withdrawal. Additionally, the study looked at the association between other county-level characteristics and the rate of infants entering foster care.

“The opioid crisis is devastating individuals, families and communities throughout this country, and we’ve really got to focus on the equitable delivery of resources to combat its effect,” said lead author Sarah Loch, MPH, director of research operations for the Vanderbilt Center for Child Health Policy. “Our findings suggest that county characteristics can and should be considered by policymakers to better direct funding to aid opioid-affected families who are at serious risk for foster care involvement. In addition, our findings highlight the potential role economic development and targeted, community-based support can play in this arena.”

Over the past two decades, the number of pregnant women with opioid use disorder grew fourfold, while the number of infants diagnosed with NOWS grew more than fivefold. Nationwide, infants under 1 year old make up nearly 20% of new foster care entries, with notable geographic variation in the rates of infant foster care entry across the U.S. In addition, infants born to mothers with opioid use disorder are commonly involved with the child welfare system, a likely contributor to the recent surge in infant foster care entries.

Studies that comprehensively examine infant-specific child welfare outcomes related to maternal opioid use, as well as the influence of other community-level factors believed to affect outcomes for this population have been lacking in the past. It is especially critical to supply more detail, as this study seeks to provide, to policymakers now as Congress is working to reauthorize the Child Abuse Prevention and Treatment Act (CAPTA), the nation’s foundational child welfare legislation, said Stephen Patrick, MD, MPH, a neonatologist at Monroe Carell Jr. Children’s Hospital at Vanderbilt and director of the Vanderbilt Center for Child Health Policy. Policymakers could implement data-driven provisions that better support local stakeholders in deploying holistic approaches that best match their communities.

“This research is a good first step in trying to understand what’s happening at the local level,” said Loch. “Federal child welfare policy has been increasingly focused on prevention, and I think if you truly want to work with communities on this, you have to understand their unique strengths and needs. If we want these policies to ultimately be effective, we have to give communities the flexibility to tailor responses in a way that makes sense for them.”

“The opioid crisis has worsened during the pandemic with record-setting rates of overdose nationwide,” said Patrick. “As we emerge from the pandemic, it is important that we realize that pregnant people and infants affected by the opioid crisis have unique needs that extend far beyond the walls of our hospitals and clinics. As policymakers consider informed approaches to combat the opioid crisis, we absolutely cannot forget about this especially vulnerable population — pregnant people and children.”