Distracted Driving in Rutherford County and Beyond 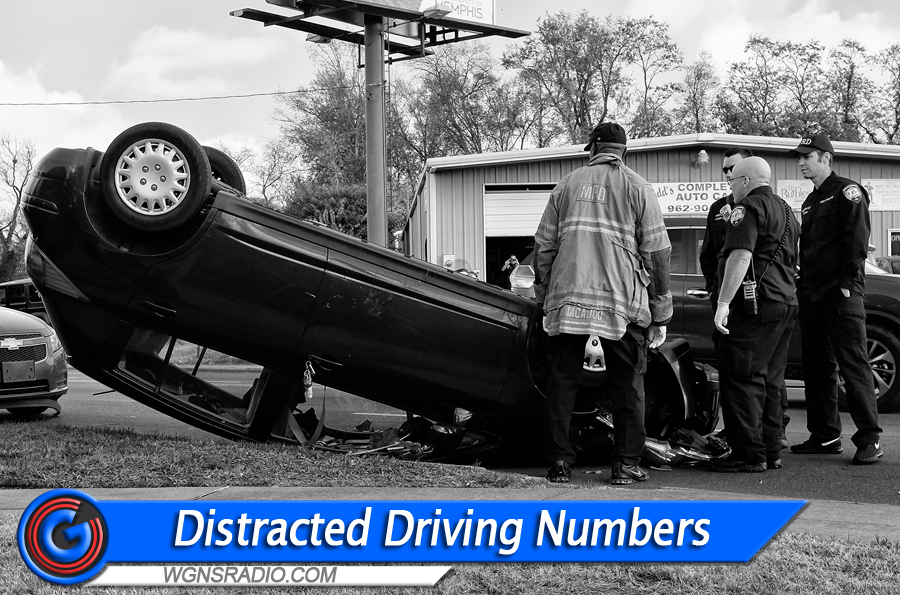 No serious injuries in the above wreck that took place in Murfreesboro, TN in 2016.

A new report finds unsafe driving behaviors have gone down, for the most part, in places like Rutherford County and throughout the state. With more on this story, here is WGNS' Scott Walker...

Scroll down to read more about this report and to see the numbers...

Some dangerous driving behaviors have fallen more than others, with drivers still admitting to speeding and using a handheld cell phone, posing a danger on the roadways, according to new survey data from the AAA Foundation for Traffic Safety. As more Americans return to the daily commute, AAA reminds all motorists to practice safe driving behaviors by focusing on the task of driving, keeping their eyes on the road and hands on the wheel.

The new data are from the AAA Foundation’s annual Traffic Safety Culture Index (TSCI), highlighting the gap between drivers’ attitudes and reported behaviors. The following shows some of the improvements in unsafe driving behaviors from 2018 to 2020. 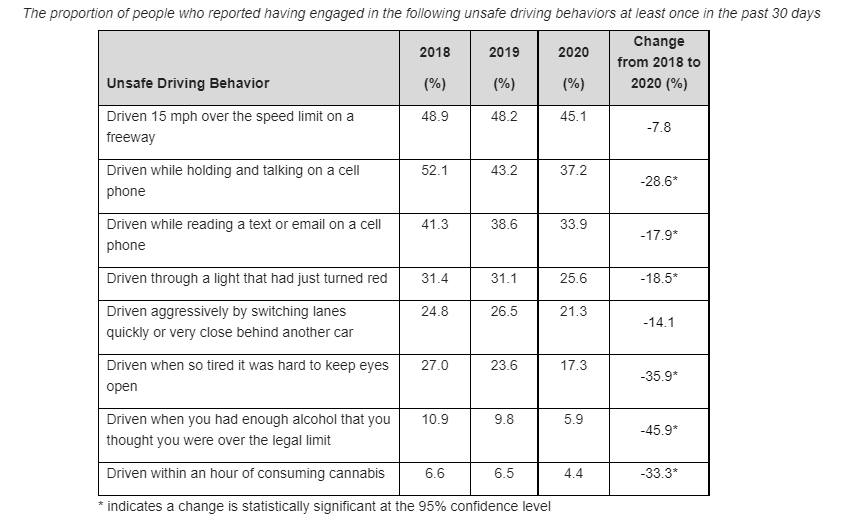 While fewer Americans took to the roads in 2020 due to the pandemic, those that did appeared to take greater risks. The National Highway Traffic Safety Administration (NHTSA) found that an estimated 38,680 people died in motor vehicle traffic crashes—an increase of 7.2% and the largest number of fatalities since 2007. And, the numbers for 2021 look even worse, as NHTSA estimates 8,730 people died in motor vehicle traffic crashes in the first three months of the year.

While the reasons for this increase are being studied, the AAA Foundation’s TSCI reveals some areas of admitted driving behavior that remain stubbornly high, despite declining since 2018: speeding and using a cell phone. Unfortunately, drivers who participated in the TSCI survey admit to risky driving behaviors despite knowing that loved ones, family or friends would strongly disapprove. Cell phone use is one such area where perception and behavior do not match. 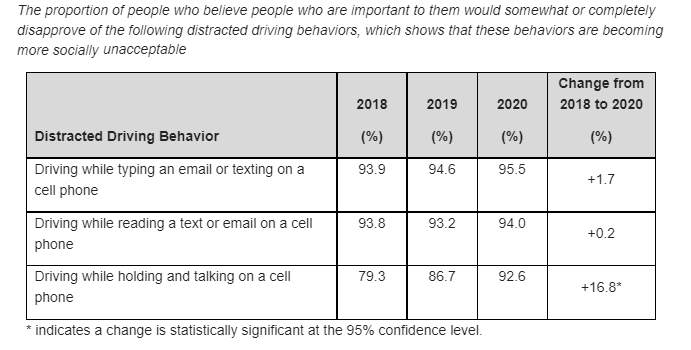 “AAA has some positive news to share about trends in safer driving behaviors, but it’s not quite time to declare victory,” said Megan Cooper, spokeswoman, AAA - The Auto Club Group. “Downward trends in self-reported impaired driving, red-light running, and drowsy driving are the kind of progress we need to curb the recent spikes in traffic fatalities”

AAA recommends these safety tips to keep in mind:

• Obey speed limits. Drivers tend to overestimate the time saved by speeding. You’d have to travel 100 miles to save roughly 5 minutes, moving at 80 mph instead of 75 mph. Speed kills and isn’t worth the cost. And recent AAA Foundation researchshows that small speed increases were enough to raise a driver’s risk of severe injury or death.

• Out of sight, out of mind. Stow your smartphone away, turn it to airplane mode, or activate call/text blocking features like Apple’s Do Not Disturb.

• Only drive sober. If you consume marijuana, alcohol, or use potentially impairing prescription medications, then don’t drive. And if you’re going to drive, then don’t consume these substances.

• Stay alert. Stop driving if you become sleepy because you could fall asleep at any time. Fatigue impacts reaction time, judgment, and vision, causing people who are very tired to behave in similar ways to those who are drunk.

The annual TSCI identifies attitudes and behaviors related to traffic safety. The survey data are from a sample of more than 2,800 licensed drivers ages 16 or older who reported driving in the 30 days before the survey, which was administered between October 23 and November 23, 2020. The AAA Foundation issued its first TSCI in 2008, and the latest report is online: AAAFoundation.org

About the AAA Foundation for Traffic Safety: Established in 1947 by AAA, the AAA Foundation for Traffic Safety is a nonprofit, publicly funded, 501(c)(3) charitable research and educational organization. The AAA Foundation’s mission is to prevent traffic deaths and injuries by researching their causes and by educating the public about strategies to prevent crashes and reduce injuries when they do occur. This research develops educational materials for drivers, pedestrians, bicyclists, and other road users.