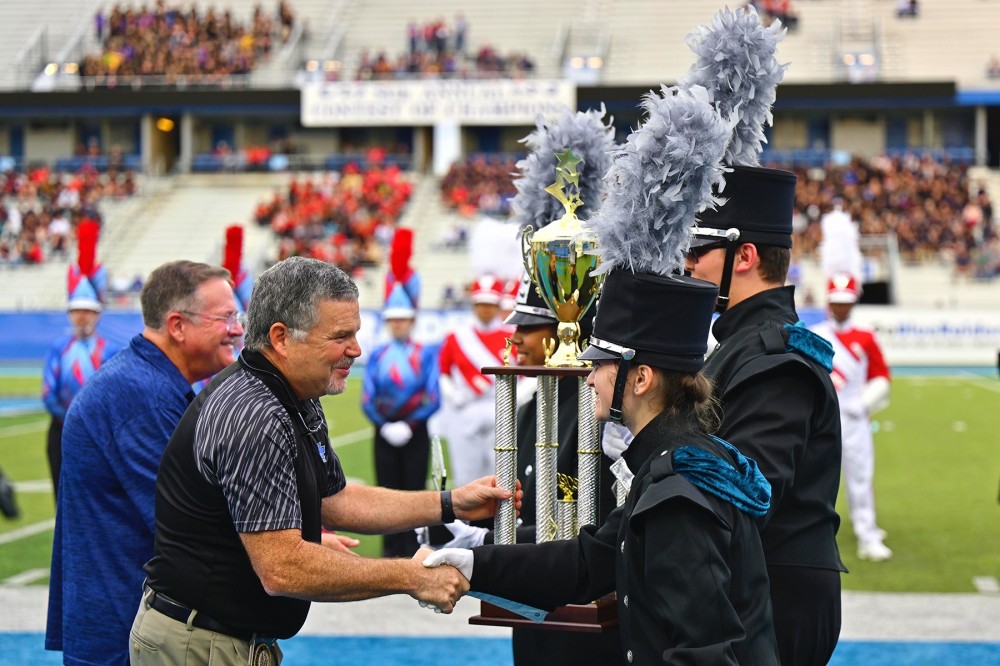 PHOTO ABOVE: MTSU School of Music professor Reed Thomas, front left, director of bands, congratulates members of the Seigel High School Marching Band for their performance at the 58th Contest of Champions held Saturday, Oct. 23, at Floyd Stadium. Shown in the background at left, is Craig Cornish, professor of music and director of athletic bands at MTSU. Seigel captured reserve champion honors at the competition. (MTSU photo by Cat Curtis Murphy)

MURFREESBORO, Tenn. — MTSU’s School of Music was pleased to resume the nation’s longest-running marching band competition after its hiatus a year ago because of the coronavirus pandemic.

The 58th Contest of Champions was held Saturday, Oct. 23, on Jones Field inside Floyd Stadium featuring 19 high school bands from four states throughout the region.

For scoring recaps, go to https://mtsu.edu/coc/.

“This year’s return of the Contest of Champions brought energy, wonderful music, and beautiful artistry to MTSU’s campus. We are so excited that we were able to sponsor the event this year amidst an ongoing pandemic,” said Jennifer Vannatta-Hall, interim director of the MTSU School of Music.

“Our athletic band faculty and staff worked tirelessly to execute the event, which brought in high school students from across the region. It was a wonderful opportunity to both showcase our regional high school marching bands and bring talented prospective students and their families to campus.”

MTSU’s late music professor emeritus Joseph T. Smith, longtime leader of the Band of Blue marching band, started the competition in 1962 to encourage high school musicians and to showcase the university for potential students and their families.

Smith and the late Horace C. Beasley, who directed the concert band and Campus School band for MTSU, are listed as the contest’s founding directors.

During the competition, judges evaluate each ensemble on its musical and marching proficiency and the effectiveness of its overall performance, using a caption judging system.

MTSU’s approximately 275-member Band of Blue, the largest student organization at the university, hosts each Contest of Champions and performs during the event to celebrate with their young musical colleagues. The Band of Blue is led by Craig Cornish, professor of music and director of athletic bands at MTSU, while professor Reed Thomas serves as director of bands.

The 1962 contest welcomed 18 bands from across the state, and up to 30 bands have competed in a single year.