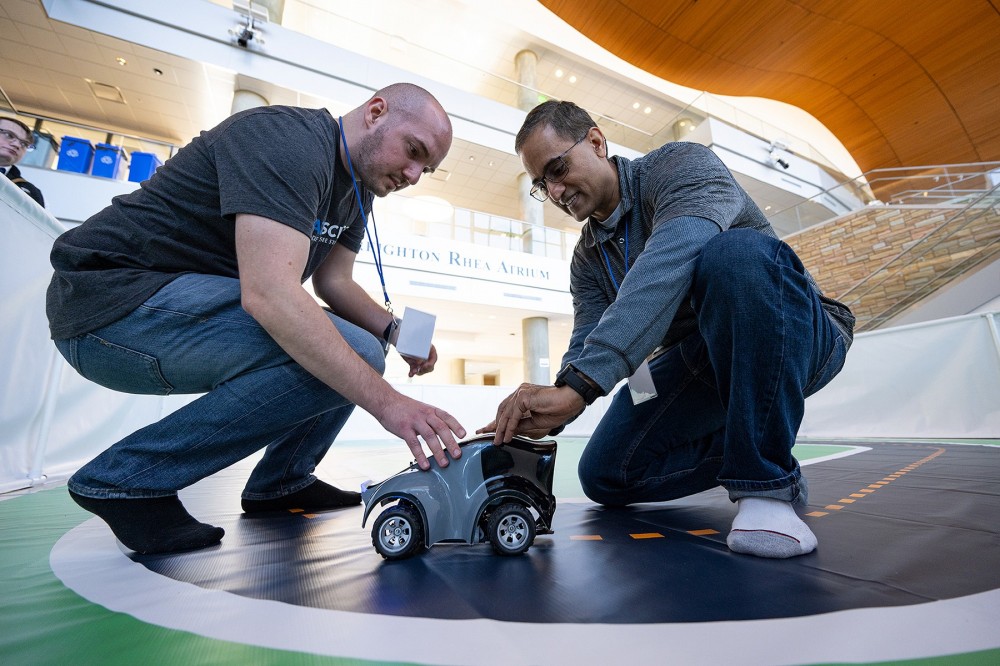 MURFREESBORO, Tenn. — As the model race car drove in fits and starts along the mock road course on the MTSU Science Building Atrium floor, an MTSU data science team member had to frequently pick it up and redirect it to stay on the roadway.

Not at all what the team planned, yet it was a problem that flummoxed all five teams who had spent the past two months dabbling in the increasingly important field of machine learning. It was part of a friendly competition of autonomously driven model race cars hosted by the MTSU Data Science Institute in partnership with Amazon Web Services.

ADVERTISEMENT
“We’re testing this all together so we can get better,” said biology professor Ryan Otter, director of MTSU’s Data Science Institute. “This is the real world, so it’s not always pretty and perfect. This is just the start.”

Otter made this matter-of-fact observation as he looked on from the steps of the atrium, which was recently transformed into a hands-on exploratory lab for the first of what Otter plans to be many “AWS DeepRacer” events hosted by the university.

DeepRacer allows developers of all skill levels to “get hands on with machine learning through a cloud-based 3D racing simulator, fully autonomous 1/18 scale race car driven by reinforcement learning.” Amazon Web Services describes it as “an interesting and fun way to get started” with machine learning.

MTSU’s Data Science program fielded two teams of students in the Nov. 13 competition along with two teams from Central Magnet School in Murfreesboro and a team from Smyrna High School. The goal was to see which team had developed the best computer training model to help their race car autonomously navigate the small track set up in the atrium.

Otter said student team members have “been teaching their cars how to drive” for the past two months. How? The car is equipped with cameras that constantly take photos of its environment and that information is used to develop a driving model that is then uploaded into the race car, first in a virtual environment and then for the ultimate test on the atrium track.

MTSU computer science major Kendra Givens, a sophomore from Murfreesboro and a member of the MTSU “Dream Team,” was a bit disappointed in the outcome because of the model car struggles on the atrium course despite much better outcomes in the virtual simulations leading up the Nov. 13 competition.

To her and everyone’s surprise, even the Amazon engineers in attendance, the enormous amount of natural light inside the Science Building Atrium on this sunny Saturday afternoon adversely affected the models’ performance, making it difficult for any of them to complete a lap on the track. Whereas students created simulated racers that could navigate the virtual course anywhere from 11 to 15 seconds, the real-life model racers were taking more than a minute to complete a lap — if they completed a lap at all.

A makeshift black curtain was eventually employed to shield the models from all the natural light, with limited success. Despite the letdown, Givens said she would definitely participate in similar events in the future — as long as things were tested in advance, she said with a smile.

“We spent a lot of time working on it. … I do want to do machine learning as a career, which is what this was,” she added. “It was fun. The ending wasn’t fun, but the working on it and seeing the model get better and better was fun.”

Amazon Web Services’ Joseph Hart, a principal account manager based in Nashville as well as an MTSU alumnus (’90), said the benefit of such events to Amazon is “being able to play a part in inspiring young minds around the world of data, analytics and data science, and what’s emerging in those fields and how it affects the business we’re in and really all businesses these days.”

Like Otter, Hart said it’s important for the data science industry to engage students at an early age about this interdisciplinary field of study. Hart himself was an English literature major who happened to land a tech-related job through a university co-op program — and has been in the industry ever since.

“From a workforce perspective, when you look across the state of Tennessee, we’re looking for bright, young talent who understand intimately the details that are involved in high performance computing, analytics, data science, machine learning — that’s what we’re here to do,” said Hart, who believes it’s important to engage students about data science even at the middle school level.

Below Photo: MTSU biology professor Ryan Otter, director of the Data Science Institute, inspects one of the model racers that would be competing in the Nov. 13 “AWS DeepRacer” event held in the MTSU Science Building Atrium. The event, which featured five teams racing autonomous racing models, was sponsored by the MTSU Data Science Institute and Amazon Web Services. (MTSU photo by Cat Curtis Murphy) 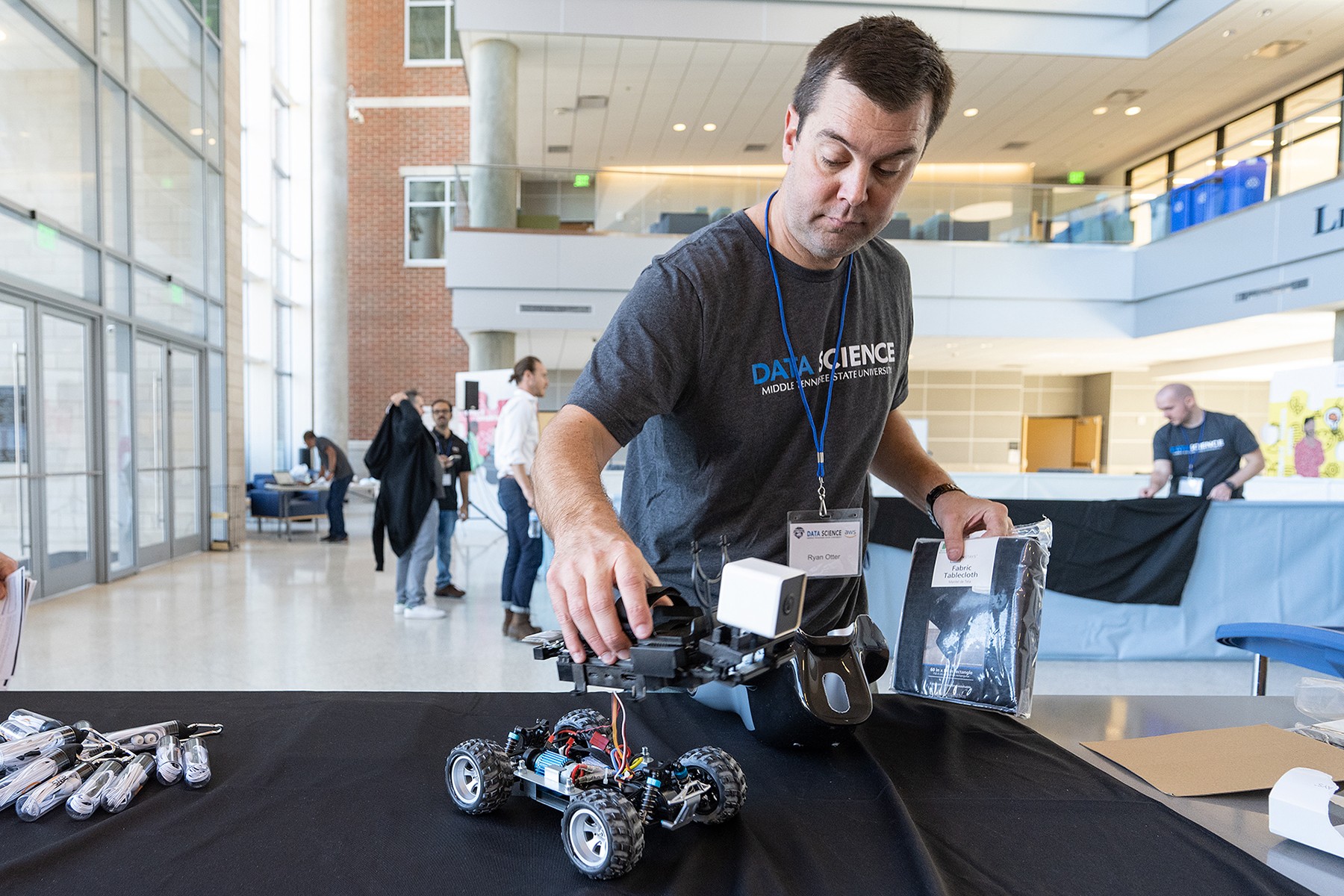 “We want to hire the best and brightest, but we also have a responsibility to be a good corporate citizen and making the communities that we’re in better,” he said.

Central Magnet seniors Calvin Guzman and Douglas Thibodeaux credited teachers such as engineering teacher Marc Guthrie for seeking out such opportunities “to push engineering students to the next level.”

“I love cybersecurity and business, and AI (artificial intelligence) can be used for a lot of different things,” said Guzman, who added that his father is active on the Sports Car Club of America road-racing circuit, piquing his interest in the DeepRacer event more.

While Thibodeaux said he’s more interested in biochemistry, “I did find this fun to do. It helped me learn coding because I did not know much about that beforehand. And I’m not super into the artificial technology and I did learn about that.”

For Otter, that’s the whole point.

“What we care about the most … is that you don’t need to be a computer programmer for 10 years to do this,” Otter said. “We need to lower this barrier of entry. We want more people — younger people, more diverse individuals, across age, background, all of it — having access.”

He said that traditionally, people interested in tech have been advised to “focus on computer science for 10 years and if you do that, you can do really cool stuff. I think that’s the opposite of what we should be doing. We should be showing people: here’s what you can do that’s really awesome, then give you access to be able to do that in a short window.”

Amazon provided access to some of its top engineers and programming platforms as part of the competition, even flying in several of its staff to support the MTSU contest.

“It’s a low point of entry, but the experts also get to play” Otter said. “It’s a really awesome opportunity to engage people. … This is real-world engagement.”