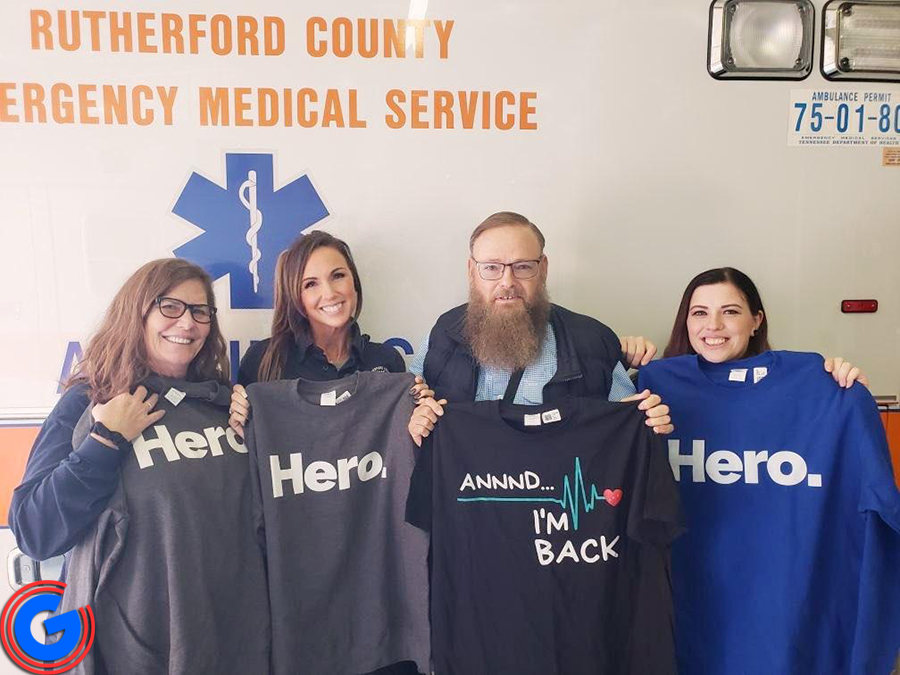 Rutherford County, TN - A Rutherford County resident who experienced a cardiac event was recently reunited with a team of medics and one of the dispatchers responsible for saving his life.

ADVERTISEMENT
White and Cherry responded to Baker’s address on October 21 for a patient having chest pains. When they arrived, Baker was pale, diaphoretic, with an irregular heart rhythm. The team quickly assessed him and started administering treatment in the ambulance on the way to Ascension Saint Thomas. When the team arrived at the emergency room with Baker, he went into cardiac arrest.

The team began performing CPR while he was still on the stretcher. Baker was moved to a bed in the emergency room where hospital staff and the medic team worked together to regain a regular heart rhythm.  He was then moved to the catheterization lab (commonly referred to as a cath lab) for further treatment. The cath lab is an examination room with diagnostic imaging equipment used to visualize arteries and chambers of the heart.

Baker spent a few days at the hospital, made a full recovery, and was released. He desperately wanted to track down the medics that saved him. After experiencing some difficulty with the search, he finally made his way through his friends’ list on social media and found RCEMS Lieutenant Mike Johnson. Mike in turn contacted RCEMS Public Relations Manager (PRM) Brent Carter who eventually able to arrange the reunion.

It was an emotional reunion as both parties recounted their side of the story. Baker had special t-shirts made up for the team, and the team had some special gifts for him as well.

“Times like this are few and far between,” said PRM Carter, “but anytime a patient can get a second chance at life and meet the persons responsible for that, it’s a joyful and heartwarming experience.”

Dispatcher Lizabeth Stluka was also on the other end of the 911 call but was unable to attend the reunion.

Baker and his family were a little extra “thankful” this Thanksgiving and RCEMS wishes them a safe and healthy holiday season together!