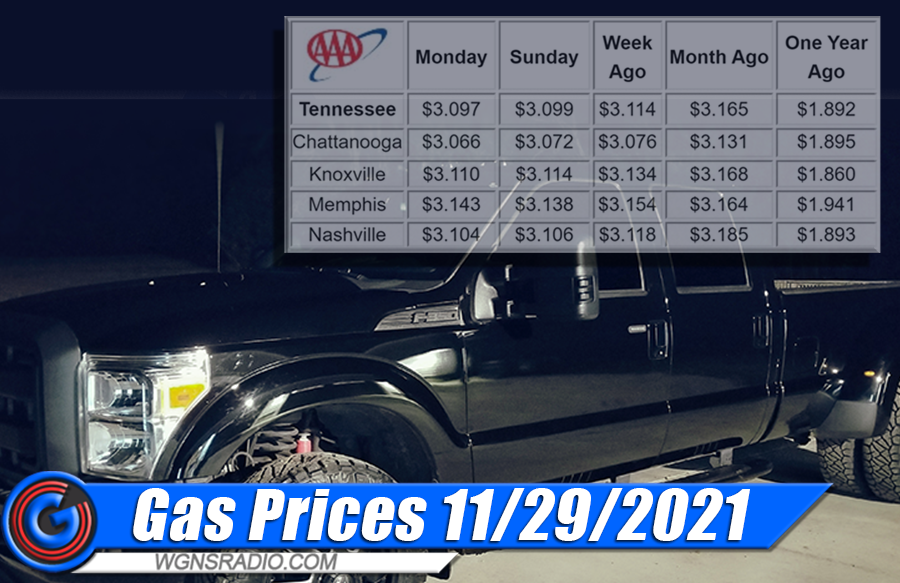 “It’s too soon to tell if fears of a global economic slowdown caused by the Omicron variant will push oil prices lower for the long term,” said Stephanie Milani, Tennessee Public Affairs Director, AAA - The Auto Club Group. “But for now, the upward pricing pressure due to tightened supply and high demand seems to have abated, and that will likely result in pump prices stabilizing.”

Crude oil prices initially tumbled more than $10 to $68 a barrel on Friday after news of the Omicron COVID-19 variant broke. Meanwhile, consumers caught a little break as the national average price for a gallon of gas dropped to $3.39, down a penny since last week.

At the close of Friday’s formal trading session, WTI decreased by $10.24 to settle at $68.15. Crude prices fell amid concerns about the new COVID-19 Omicron variant and the travel restrictions announced by the Biden administration. With little known about the new variant, it is unclear what long-term impact it may have on crude prices. Before reports of the new variant, EIA's weekly report revealed that total domestic crude supply increased by 1 million bbl to 434 million bbl. However, prices rose last week despite President Biden’s announcement that the federal government will make available up to 32 million bbl of oil held in the U.S. Strategic Petroleum Reserve (SPR) and accelerate the timeline for the sale of an additional 18 million bbl of SPR oil, as mandated by Congress. The effort is expected to be coordinated with the release of oil from other major crude consuming countries, including China, India, Japan, South Korea, and the U.K, to help reduce the price of crude. How much of a price impact, and how long the price relief at the pump will last, depends on the total amount of oil that moves into the market after the coordinated releases around the globe. For this week, crude prices could decline further if the global market begins to see an increase in supply from the joint releases or EIA's next report shows another increase in total domestic supply. Additionally, market watchers will keep their eye on the impact of the Omicron variant on the oil market.