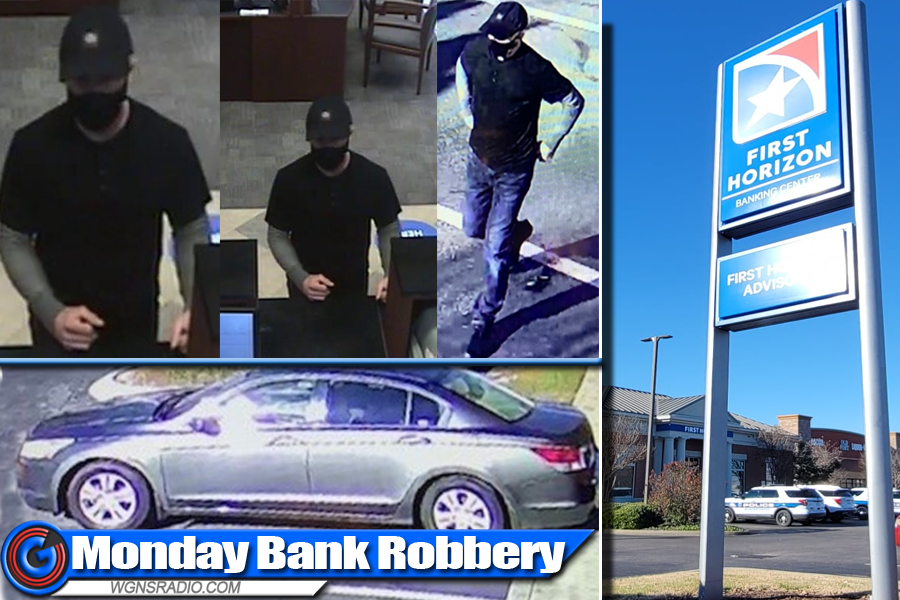 (MURFREESBORO) Update on robbery:  Murfreesboro Police detectives are investigating a strong-armed robbery that occured at 1:27PM Monday afternoon (12/13/2021) at First Horizon Bank, 154 Cason Lane (formerly First Tennessee Bank).  The bank is next to one of the entrances to the Kroger store off of Cason Lane, near the intersection of Cason Lane at Old Fort Parkway or HWY 96.

At last report on Tuesday morning, the bank robber is still on the run.

Evidently, the unknown man walked into the bank shortly after the lunch hour and handed one of the tellers a note. The note demanded money.

Bank employees told police the unknown man was wearing a black t-shirt with a gray or dark green Under Armor shirt underneath the t-shirt, a black hat, black face mask and jeans.

The man fled the bank in what looked to be a gray or silver 4-door sedan. Reports indicate the vehicle may have been a newer model Honda Accord. He got away with an undisclosed amount of cash.

More on the Get-Away Car

The bank robber is believed to be driving a newer model, dark gray Honda Accord with no tag.  The get-away car was parked across the street at a different bank.  See above photo.

The Murfreesboro Police Criminal Investigations Unit (CID) detectives and special agents from the FBI responded to the bank.

If you were near First Horizon Bank on Cason Lane around 1:30PM Monday afternoon and saw or heard anything, please contact CID Detective Julie Cox at 629-201-5514.  You can also submit a tip anonymously to Rutherford County Crime Stoppers at 615-893-STOP (7867) or via the P3 Mobile Intel app.  A reward of up to $1,000 may be available for information leading to an arrest.

(MURFREESBORO) Released moments after robbery: There was a bank robbery in Murfreesboro on Monday. The robbery occurred at 1:27 in the afternoon.

According to police, a subject entered First Horizon Bank (formerly First Tennessee Bank) on Cason Lane and handed one of the tellers a note demanding money. After receiving an undisclosed amount of cash, the unknown man exited the bank. Reports are not clear as to if the man ran through the Kroger parking lot behind the bank – or if he fled the scene in a vehicle.

Police are currently searching the area for the bank robber. The bank had to be temporarily closed while detectives investigated the case. The FBI has been notified.