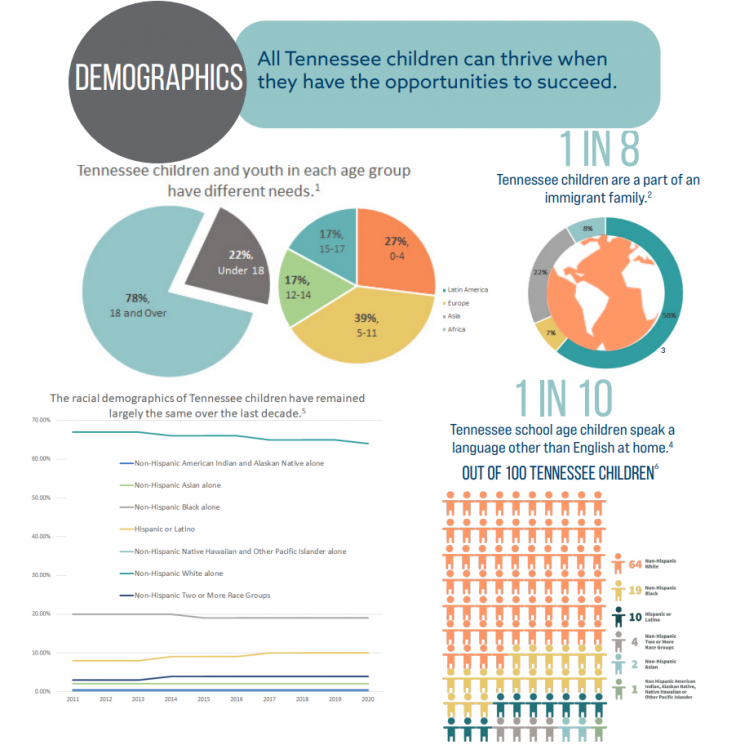 Above: Graphic from the chart (see link at the bottom of this story)

Tennessee’s children and their caregivers have struggled through the last two years but expanded supports make recovery possible, according to The State of the Child 2021 an annual report released by the Tennessee Commission on Children and Youth.  This year’s release evaluates the most recent available data on childhood well-being in economics, education, health and youth justice.

The State of the Child report examines data from the last three years to evaluate how Tennessee families have fared throughout the pandemic, where we find resilience and how we can recover. The concurrent health, economic and social crises have left many Tennessee families unable to provide for their families and challenged many others.

ADVERTISEMENT
Expanded supports from the state and federal government have been critical in mitigating the negative impact of the last two years and helping build resilience among Tennessee families, yet many have or will soon expire. Before the pandemic, one in five Tennessee families were living in poverty, and 42 percent were economically disadvantaged.

In September 20201, 42 percent of Tennessee households with children had difficulty paying for usual expenses. In Tennessee, 60 percent of households reported receiving a Child Tax Credit. These funds are being used to meet the critical needs of over 1 million Tennessee children and their caregivers yet without intervention they are set to expire December 15th, 2021. Without extension, one in six of those children would fall back into poverty.

High housing costs have continued to burden Tennessee families. The annual household income required to afford a two-bedroom rental home at Fair Market Rent is $36,587, 1.5 times the minimum wage, and $10,000 higher than the poverty line. More than one in four Tennessee children live in a household spending over 30 percent of their monthly income on rent or mortgage. In August 2021, one in five households with children had little or no confidence in their ability to make their next housing payment on time. Of those households, more than half were likely to face eviction or foreclosure in the next two months.

Youth and young adults' mental health continues to struggle. Although already on the decline, the pandemic likely exacerbated the issue.

Indicators of youth mental health include:

• In September 2021, 58 percent of young adults reported being anxious or on-edge for more than half of the days in the last two weeks. The highest reported rate in the country.

• One in three reported feeling down, depressed or hopeless.

• In 2019, more than one in seven Tennessee high school students reported they had made a plan within the last year of how they would attempt suicide.

• In 2019, one in six high school girls reported experiencing physical dating violence in the last year, the highest rate in the country and twice the national rate.

“Tennessee’s children and their caregivers have faced immense challenges over the last two years. We have seen how important it is to come together as a community and a state to provide support,” said Richard Kennedy, executive director of Tennessee Commission on Children and Youth.

The last two years have highlighted the critical need for access to healthcare for children and their caregivers. In 2020, the percentage of uninsured children in Tennessee doubled. Many caregivers delayed care during the pandemic, Tennessee had a 62 percent decline in pediatric visits in April 2020 compared to the month prior. The delay in care resulted in a 39 percent lower childhood vaccination rate when compared to April 2019.

More than half of Tennessee children are insured through TennCare or CoverKids. Over the last two years, one in five parents in these programs reported a loss of coverage. For more than one in three of those that lost coverage, it was due to an issue with paperwork. In 2019, there were over 53,000 Tennessee children that were eligible for coverage, yet remained uninsured. A healthy future begins with children and their caregivers having access to the healthcare they need.

The report shows how additional state and federal intervention can build resilience and support the health and well-being of families with children. Tennesseans, particularly those with children in the household, have experienced drastic changes throughout the pandemic. The ongoing steps we take to address children’s needs and support their development can ensure their current and future health as well as long-term development.

The State of the Child 2021 is available at http://www.tn.gov/tccy/stateofthechild