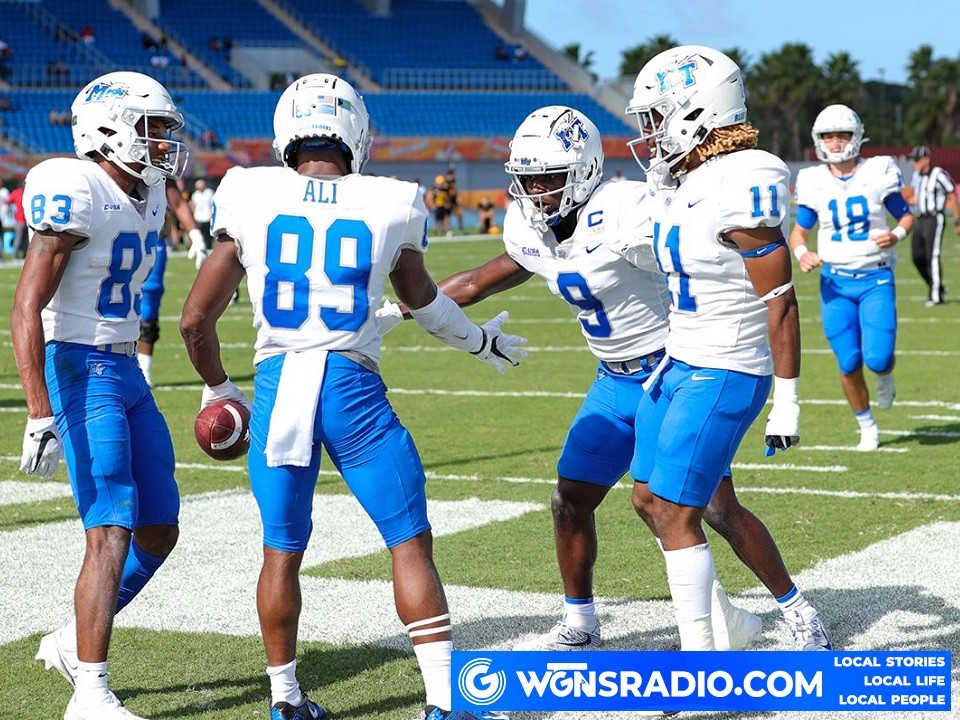 NASSAU, Bahamas — Middle Tennessee football battled back after trailing at halftime, outscoring Toledo 17-7 in the second half to power past Toledo 31-24 in the 2021 Bahamas Bowl at Thomas Robinson Stadium on Friday afternoon.  And yes, you heard the action live with Chip Walters over WGNS.

ADVERTISEMENT
The win is Middle Tennessee's first bowl win since their 35-30 win over Arkansas State in the 2017 Camellia Bowl. The win also improves MT's record to 7-6, securing their first winning season since the 8-6 2018 C-USA East Champions campaign.

The Blue Raiders got on the board first, as Nicholas Vattiato found Yusuf Ali on a quick hitch route, and the wide receiver lowered his shoulder into the endzone for a six-yard touchdown catch. It capped off a 14-play, 80-yard drive for Middle Tennessee that gave them a 7-0 lead.

After a pair of touchdowns from the Rockets on explosive plays, MT responded with two spectacular catches of their own, a 23-yard, one-handed grab from Jarrin Pierce and a 17-yard, high-point catch from Izaiah Gathings to place the ball at the Toledo 1, where Frank Peasant pounded the rock into the endzone to help the Blue Raiders tie the game 14-14.

Toledo would score a field goal after getting the ball inside the MT 30 following an interception return, taking a 17-14 lead into the locker room at halftime.

After holding the Rockets scoreless throughout the third quarter, the Blue Raiders struck back to retake the lead of the first play of the fourth quarter, as Mike DiLiello ran the QB option up the gut 17 yards to give MT a 21-17 lead after the PAT.

After a stalwart defensive stand gave MT the ball at their own 41, Jarrin Pierce pulled out a double move on second down to break the Rocket defensive back's ankles, sprinting past the secondary to glide under a pass from Vattiato and ease into the endzone for a 59-yard touchdown catch. The Zeke Rankin PAT gave MT an 11-point lead, 28-17, with just 6:24 to go in the ball game.

Zaylin Wood got Middle Tennessee's 32nd takeaway of the season after Jordan Ferguson's pressure came home on Toledo quarterback Dequan Finn, striking the Rocket's arm as he threw. Wood tracked down the wobbly pass in the air to secure the interception at the Toledo 23. Rankin added a 35-yard field goal four plays later to stretch the Blue Raiders' lead to 31-17.

Toledo added a late touchdown during a desperation drive to pull within a score, but an onside kick recovered by Yusuf Ali iced the game for the Blue Raiders, 31-24.

GROWING UP FAST: True freshman QB Nicholas Vattiato, who was pressed into a starting role in the ninth game of the season after an injury to Chase Cunningham, came up huge at the Bahamas Bowl. Vattiato completed 23-of-35 passes for 270 yards and two touchdowns and was named Bahamas Bowl Offensive MVP. It was the second-highest passing total of his career and just shy of the 304 yards he had against Old Dominion. His biggest play was a 59-yard touchdown pass to Jarrin Pierce that gave Middle Tennessee a 28-17 lead.

GOING DEEP: Nicholas Vattiato and Jarrin Pierce teamed to make Blue Raider bowl history when they connected for a 59-yard touchdown in the fourth quarter. The 59-yard pass completion was the longest in Middle Tennessee history. The previous longest was a 51-yard completion from Brent Stockstill to Richie James in the Hawaii Bowl. The 59-yard pass was also the longest of Vattiato's career.

LONG DISTANCE DRIVES: Middle Tennessee went long distance on its first three scoring drives against Toledo. Each of the first three scoring drives went 75 yards or more with two drives taking 14 plays. Middle Tennessee's first scoring drive was an impressive 14-play, 80-yard drive that consumed 4:20 in the first quarter. Yusuf Ali had two big plays on the drive, hauling in a 23-yard reception to the Toledo 29 and scoring the touchdown on a 6-yard pass from Nicholas Vattiato. The Blue Raiders converted three third-down plays on the drive, including a third-and-goal from the 6 for the TD. Mike Diliello's 14-yard run on third-and-7 from the Toledo 21 was a key play during the scoring drive. The Blue Raiders tied the game, 14-14 in the second quarter, on a 7-play, 75-yard drive. Middle Tennessee took a 21-17 lead in the fourth quarter with an impressive 14-play, 75-yard drive that consumed six minutes. Mike DiLiello capped the drive with a 17-yard run on a third-and-5 play.

THIRD DOWN D: Middle Tennessee's defense was solid against Toledo but it was particularly stout on third-down plays. Toledo was just 4-of-15 on third-down conversions as the Blue Raiders were consistently able to get off of the field defensively and keep their offensive counterparts in good position. Toledo failed on its first eight third-down conversions before finally converting its first attempt in the third quarter.

FINISHING TOUCHES: Middle Tennessee's defense came up with its 17th interception and 32nd turnover of the season in the fourth quarter against Toledo. Two defensive linemen created the turnover as Jordan Ferguson got to the quarterback and deflected the pass that was intercepted by Zaylin Wood. It was the first career interception for Wood. Middle Tennessee entered the game ranked fifth nationally for interceptions. The 32 total turnovers lead the country.

HUMAN HIGHLIGHT: WR Jarrin Pierce has had his share of electrifying plays during his Blue Raider career. He added to the collection with one of his most impressive against Toledo. Pierce's 24-yard, one-handed grab highlighted Middle Tennessee's second scoring drive. Pierce brought the pass in with one hand while keeping his balance down the sideline to set the Blue Raiders up at the Toledo 19.

CAREER DAY FOR ALI: WR Yusuf Ali turned in the best performance of his career at the Bahamas Bowl. Ali established a new career high for receptions with nine to lead the Blue Raiders, besting his previous high of eight catches vs. UTSA in 2020. Ali was targeted 12 times. He finished the game with nine receptions for 39 yards and a touchdown.