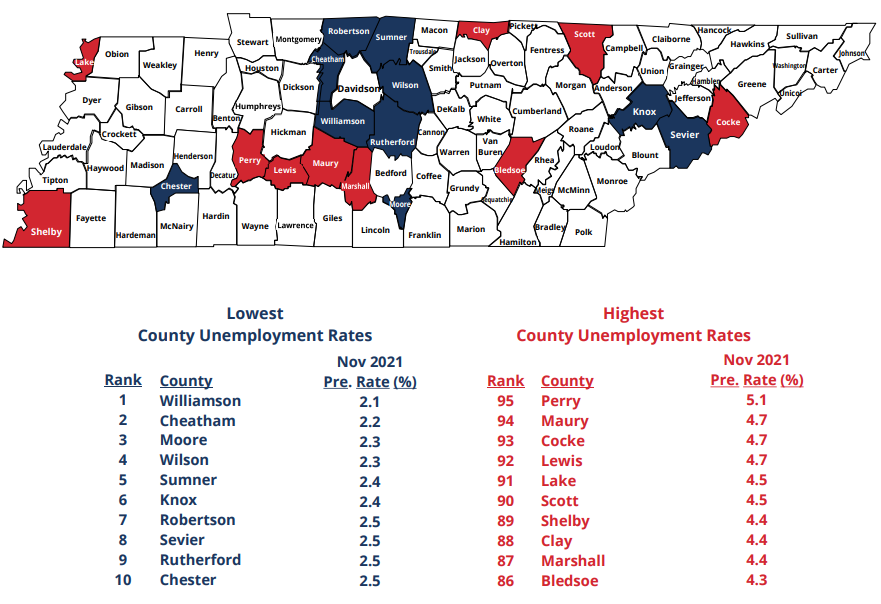 The employment situation improved in a majority of Tennessee’s counties during November, according to data from the Department of Labor and Workforce Development. This comes after the statewide unemployment rate returned to pre-pandemic levels for the month.

ADVERTISEMENT
Williamson County continued to have the state’s lowest level of unemployment. At 2.1%, its November rate is down 0.1 of a percentage point when compared to October. Cheatham County had the second-lowest rate in the state, moving from 2.5% to 2.2% in November. As for Rutherford County, the unemployment rate came in at 2.5%, which ranked at number 9 on the list.

Statewide, Tennessee experienced lower unemployment for the sixth consecutive month. With a November seasonally adjusted rate of 4%, down 0.2 of a percentage point from October, the state matched its pre-pandemic unemployment levels. In March 2020, the state’s rate was 4% and then spiked to an all-time high of 15.8% the next month.

Nationally, unemployment also improved in November. The seasonally adjusted rate for the month was 4.2%, down 0.4 of a percentage point from the October rate of 4.6%.

The state and national unemployment rates are seasonally adjusted to A complete analysis of the November county unemployment data is available here.

Job seekers across Tennessee can access helpful information and assistance online or in person. They can learn more about what services are available at www.TNWorkReady.com.
Tags: employment Murfreesboro Rutherford County Tennessee TN unemployment
Sections: News