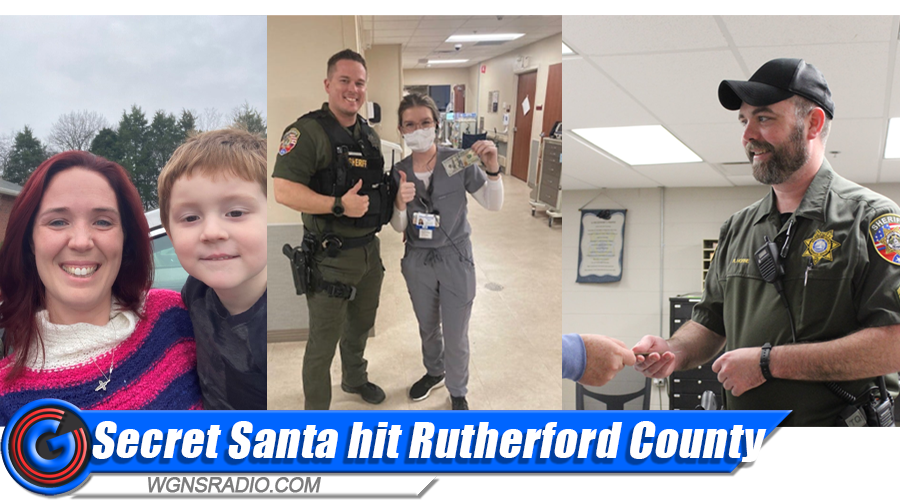 Secret Santa really dreamed of being a law enforcement officer like his uncle.

But fate took him to a successful career in sales.

ADVERTISEMENT
So every Christmas, Santa and Mrs. Claus and their family share their success by giving Sheriff’s patrol deputies $100 bill to people they encounter in their daily, evening and night shifts.

Here are three examples of how the deputies distributed the money.

Deputy Jeremy Gregory responded to a call Dec. 14 where a grandmother was caring for her five grandchildren who had been out of work for eight months due to sickness.

“She wanted me to contact the Department of Children’s Services to see if they could assist her in taking the children because she did not have the funds to provide for their essential needs from being out of work for so long,” the deputy said.

DCS contacted another family member for temporary custody of the grandchildren.

Gregory contacted the grandmother again last week. She went back to work part-time and her health is improving. She received custody of her grandchildren again.

“I decided to give Secret Santa’s $100 to the grandmother because even in hard times, she still tries to keep a positive attitude and puts the needs of her children and grandkids first,” Gregory said. “She was thankful for the donation and she was excited to be able to buy new clothes for the children for Christmas.”

Deputy James O’Rourke was visiting at StoneCrest Medical Center in Smyrna when employees told them about how a nurse’s family was affected by the tornadoes.

Nurse Allison Armstrong’s grandparents, Mr. and Mrs. Muiney in Kingston Springs, just lost their home and all belongings to tornado last week. Her grandfather was recently diagnosed with an illness.

“She was very grateful on behalf of her grandparents,” O’Rourke said.

Deputy Summer Brogdon wanted to find someone who truly needs help during Christmas.

She stopped by Murfreesboro Christian Church before Sunday services where she met with the pastor who led her to young mother Kristin Bennett whose husband has serious medical conditions and her 4-year-old son has some needs.

“Due to all the medical bills from her husband and child, they struggle from month to month,” the mother told Brogdon. “She was very thankful and grateful for the extra $100 for Christmas.”

The Sheriff’s Office thanks Secret Santa and Mrs. Claus and their family for sharing with other people in Rutherford County for Christmas.