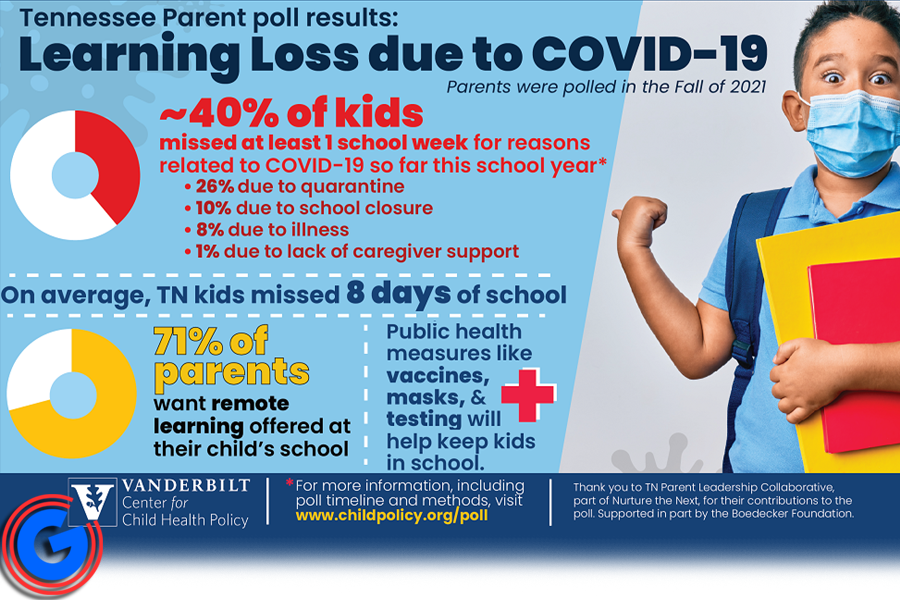 STUDY: The latest analysis of the Vanderbilt Child Health Poll has found that nearly 40% of Tennessee parents said their children missed at least one week of school during the Fall 2021 semester, and more than one-third missed at least one day due to quarantining from COVID-19.

This analysis is the latest from researchers in the Vanderbilt Center for Child Health Policy and explores the impact of COVID-19 on learning loss across the state, as well as breaking down the poll responses from Tennessee parents across region and by race and ethnicity.

“The finding that close to 40 percent of children missed at least one week of school (5 or more days absent) raises serious concerns about the many hours of missed instructional time and probable learning losses,” said Carolyn Heinrich, PhD, Patricia and Rodes Hart Professor of Public Policy and Education, and Chair of the Department of Leadership, Policy, and Organizations at Vanderbilt University.

Scroll down to learn more results of this study...

Listen to WGNS Online "LIVE" Now - Click the below graphic

“It is not surprising that 70 percent of parents want remote instructional options for their children, which could be critical to avoid further lost instructional time and the compounding of its negative effects,” Heinrich said.

The researchers said they are emphasizing the importance of kids being in school, but leaders should also consider clinically recommended public health measures to ensure children are safe and healthy in the classroom.

“We know that taking sound public health approaches, like those recommended by the American Academy of Pediatrics, will help us keep kids in school,” said Stephen Patrick, MD, MPH, a neonatologist at Monroe Carell Jr. Children’s Hospital at Vanderbilt and director of the Vanderbilt Center for Child Health Policy. “These steps include vaccination among people who are eligible, masking of students and teachers, keeping students and staff who are sick at home, and using testing strategically to maximize in person school days.”

The poll was funded in part by a grant from the Boedecker Foundation.

The Vanderbilt Child Health Poll, which is fielded annually and conducted in October and November 2021, sought to oversample non-White parents to gauge differences in child health concerns and priorities by race. Our sample size was large enough to draw conclusions on differing responses between Black and White parents, but the number of respondents from other racial/ethnic groups was too small to yield statistically significant results. Focusing on health equity and the racial disparities that effect families across the state of Tennessee remain top priorities for the Child Health Poll.