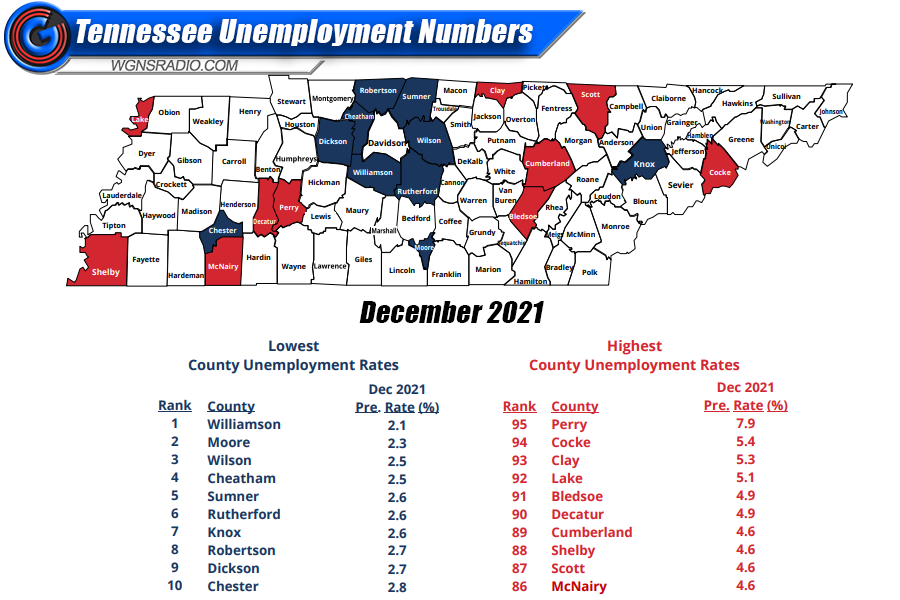 The unemployment numbers for each of Tennessee's 95-counties has been confirmed for the month of December and the jobless rate increased in 87 counties during the month. Five counties saw rates go down, while the numbers remained the same in three counties.

Scroll down to continue reading about the latest unemployment numbers in Tennessee...

The new county-level data comes after Tennessee recorded its lowest statewide unemployment rate in two years. The December 2021 seasonally adjusted figure of 3.8% was down 0.2 of a percentage point from November and the lowest the state has recorded since January 2020.

Unlike statewide unemployment data, county data is not seasonally adjusted to account for economic influences such as school breaks and severe weather events.

The state’s unadjusted labor participation increased to 60.6% in December, from 60.2% in November. When people join the labor force, they are typically unemployed, and that can drive unemployment rates up.

While the unadjusted number of employed individuals did increase during the month, which is consistent with seasonal hiring, the number did not grow enough to offset the labor force growth, which caused the county unemployment rates to inch upward.

Williamson County topped the list of counties with the lowest unemployment in December. It recorded a rate of 2.1%, which mirrored its number from the previous month. Moore County had the state’s second-lowest rate at 2.3%, which was up 0.1 of a percentage point compared to November.

Perry County recorded the highest unemployment rate in Tennessee during December. The rate there jumped 2.7 percentage points to 7.9%. Cocke County followed with a rate of 5.4%, up 0.6 of a percentage point from November.

Nationally, unemployment for the month dropped 0.3 of a percentage point to 3.9%.

The Department has compiled a complete analysis of the December 2021 county unemployment data, which can be found here.

Tennessee has many different services that can help unemployed residents find a new job or assist someone looking to skill up for a new career. There are nearly 100 American Job Center locations across the state where job seekers can meet with career specialists and come up with an action plan. They can also find assistance online. The journey to a new job in the Volunteer State starts at www.TNWorkReady.com. The site offers multiple resources in an easy-to-access format.