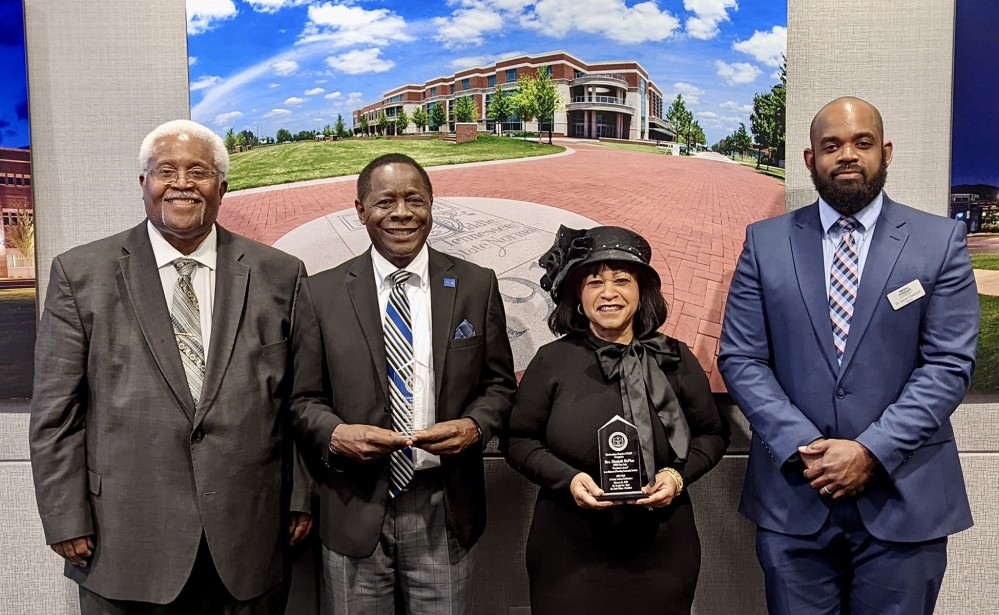 MTSU President Sidney A. McPhee and his wife, Elizabeth McPhee, were honored to receive President’s Awards from the Murfreesboro Branch of the NAACP as part of a virtual Martin Luther King Jr. and Social Justice Celebration broadcast Monday evening.

MURFREESBORO, Tenn. — MTSU President Sidney A. McPhee and his wife, MTSU first lady Elizabeth McPhee, were presented special awards Monday night by the Murfreesboro Branch of the NAACP for their ongoing community service and support of underserved student populations at the university and Murfreesboro City Schools.

The McPhees were presented the NAACP’s President’s Awards during a virtual Martin Luther King Jr. and Social Justice Celebration broadcast.

“We are humbled and (I’m) humbled that the organization has seen fit to give this honor to me,” President McPhee said in accepting the award from longtime local NAACP member and first vice president, the Rev. Goldy Wade, who presented the award on behalf of current NAACP President Katie Wilson.

“It’s always been our desire to make this community a place for all of the citizens,” McPhee continued. “Our university is a critical part of the development of the community, and this reflects the work of many on our university campus in making sure that MTSU is an inclusive institution.”

In two decades-plus under McPhee’s leadership, MTSU is second only to Tennessee State University in the total number of Black graduates produced by all public institutions in the state, both male and female; MTSU has the highest six-year graduation rates among the state’s three top producers on Black graduates in the most recent cohort measured; and MTSU had the highest retention of Black males enrolled at land-grant institutions as of fall 2019.

Under McPhee’s direction, MTSU also has developed a number of student success programs to support underrepresented student populations such as the Scholars Academy and the STAR, or Student Transition and Academic Readiness, Program. Both are early arrival programs to help acclimate first-generation, underrepresented and underprepared students, providing them with an introduction to college in a supportive learning environment.

Mrs. McPhee has been actively involved with a number of charitable organizations and initiatives over the years, including extensive community service work as a member of Alpha Kappa Alpha Sorority Inc., and serving on the boards of the Martin Luther King Jr. Scholarship Fund of Rutherford County and the Murfreesboro City Schools Foundation, to name a few.

Wilson, the local NAACP president, said the longtime civil rights organization wanted to acknowledge the McPhees “for all the work they have done” over their 20-plus years of giving back to the Murfreesboro and Rutherford County community.

The NAACP’s traditional MLK Breakfast on campus, where it presents a variety of community service awards, was canceled this year after the national NAACP office asked local branches to conduct virtual instead of in-person events due to the ongoing pandemic, Wilson said.

“We felt this is a great opportunity to recognize both (McPhees),” Wilson said. “They have been great educators and continue to be educators, as well as provide service to community organizations and opening the campus up to the community.”