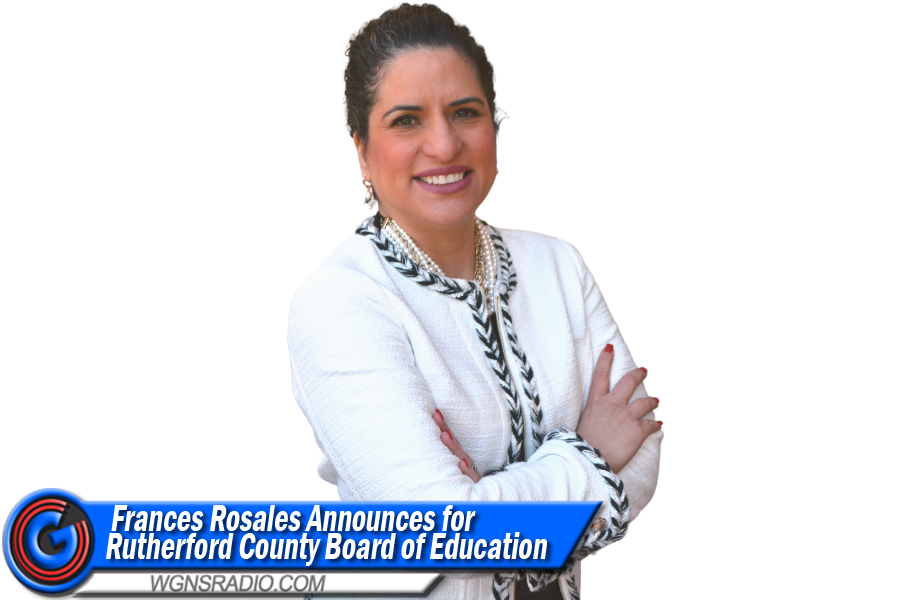 Murfreesboro, TN. — Frances Rosales, a community volunteer and parent living in Rutherford County, has announced her candidacy for a seat on the Rutherford County School Board. A strong advocate for education, Rosales pledges her commitment to build collaboration with students, teachers, and families to strengthen the county school system and address the issues facing the district.

Rosales stated, “It is imperative that we have a strong public school system that allows students to flourish academically and socially. We are a growing community that needs to address numerous educational issues including zoning, the budget, and curriculum choices. The task will not be easy, but if elected, I know that I will make a dedicated, positive impact. As a board member, I will be committed to teamwork and engagement with our administrators and faculty. Concurrently, as a parent I can assure other parents that I will listen to and be a voice for the families in our community. I believe together we can give our children the future they deserve. As our children thrive, so will our community.”

“No particular group holds ownership over good ideas. However, we cannot put any divisive or extreme ideology ahead of our children and schools. We must agree to do what’s best for our children and our community.”

Frances Rosales graduated from the University of Tennessee with a B.S. in Biochemistry. She is currently employed as an SEO Manager at Harper Collins Christian Publishing. Rosales and her husband, Joshua Rosales, have two adult daughters, one son who attends Blackman HIgh School, and one daughter who attends pre-school. Rosales and her husband hold leadership roles with the non-profit organization Break-Thru Nashville.

For additional information about Frances Rosales and the Rutherford County School Board election go to Facebook, @FrancesRosalesForSchoolBoard. All registered voters inside Zone 7, which includes Districts 14,19, and 20 in Rutherford County will be eligible to vote for members of the board in the May 3, 2022 primary election. The general election will be held August 4, 2022.

Above release from Frances Rosales