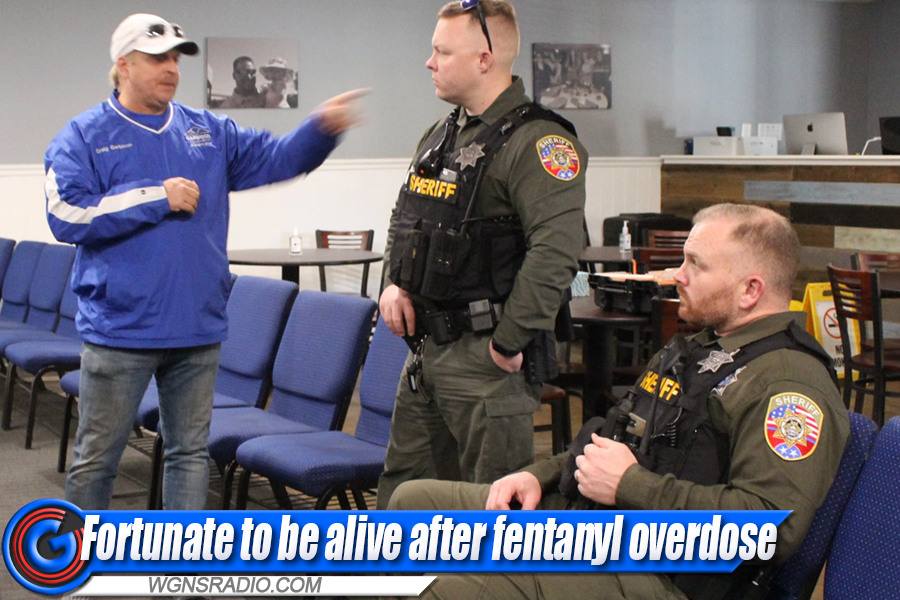 ADVERTISEMENT
29-Year-old Farris of Eagleville almost died in January 2021 when he overdosed on fentanyl. Farris was homeless with “no money, no nothing” when he used drugs he believed was methamphetamine.

“It wasn’t meth,” Farris said. “It was pure fentanyl. (He was told) I did enough to kill several people.”

The U.S. Drug Enforcement Administration reports fentanyl is 80-100 times stronger than morphine. Two milligrams or a few grains of salt are a potentially deadly dose.

Farris survived and flourished. He graduates Friday from a one-year faith-based, discipleship program.

Farris started drinking in college and later used drugs. He worked but used his paycheck to buy drugs. He stayed with family and friends until he burned his bridges and became homeless. He was arrested several times on DUI, burglary, drug and burglary charges.

When he overdosed, a witness called the Sheriff’s Office and did cardiopulmonary resuscitation on him until paramedics treated him with Narcan, a medication spray used to reverse the effects of opioid drugs.

“I barely remember coming to the hospital,” Farris said. “They had me on an IV with Narcan for two days. Every time they tried to take me off, I started to overdose again. It stayed in my system until it diluted out.”

Farris thought they were there to arrest him but the STOP deputies offered help.

The STOP program began after Lt. Will Holton became concerned about the growing number of overdose deaths in 2020 in Rutherford County. He obtained a U.S. Department of Justice grant to form the five-member STOP unit to reduce opioid dependency through education, intervention, prevention and treatment beginning in October 2020.

“We can arrest people over and over again but until we solve the problem, the addiction, nothing is going to change,” Holton said. “It is our goal to transform our opioid-dependent citizens back into healthy members of the community.”

STOP deputies respond to all overdoses occurring in the county. On one day last month, they responded to three overdoses resulting in one death. Many overdoses are traced to the synthetic opioid fentanyl.

Drug dealers add fentanyl to heroin to make it stronger.

“The problem is fentanyl the size of a couple grains of salt is enough to overdose,” Holton said.

STOP deputies try to prevent overdose deaths by supplying Narcan to families and demonstrating how to use it, discussing the signs and symptoms of drug use and informing users about treatment facilities.

People who need their help may call Dispatch at 615-898-7770 and ask for the STOP Unit or email stop@rcsotn.org.

To date, the STOP Unit deputies have responded to 73 overdoses. They issued 653 doses of Narcan and handed out 741 treatment packages.

They confiscated significant amounts of heroin, fentanyl, cocaine, methamphetamine and more than 150 doses of prescription opioids to people who were not prescribed the drugs.

They make referrals to Herndon for recovery and treatment.

“Through this new approach, it is our goal to transform our opioid-dependent citizens back into healthy members of our community,” Holton said.

Herndon, who is in recovery, said she meets with the individual with substance abuse issues to learn how she can help.

She works with facilities throughout the U.S. to help the person receive treatment and recovery.

So far, 80 people from Rutherford County were admitted to facilities for treatment with only a few relapses.

“The reason I do it is because I want to give back what was given to me and I feel like the public isn’t educated on addiction and sometimes we give up on these individuals,” Herndon said.

Farris said Herndon helped him to be admitted into the Mosaic Program in Pelham, Tenn., a 12-month program operated by two pastors.

“It changed my life and gave me hope,” Farris said.

“The only way to keep recovery is if you give it away,” Farris said. “I’m planning to help as many people as I can to change their life.”

Recovery helped him regain the trust of his family.

“We need more officers like Madore and Sharp to have a heart for recovery and want to help people,” Farris said. “Erica did not give up on me. She’s been my guardian angel for sure. If it wasn’t for them, I wouldn’t be here right now.”