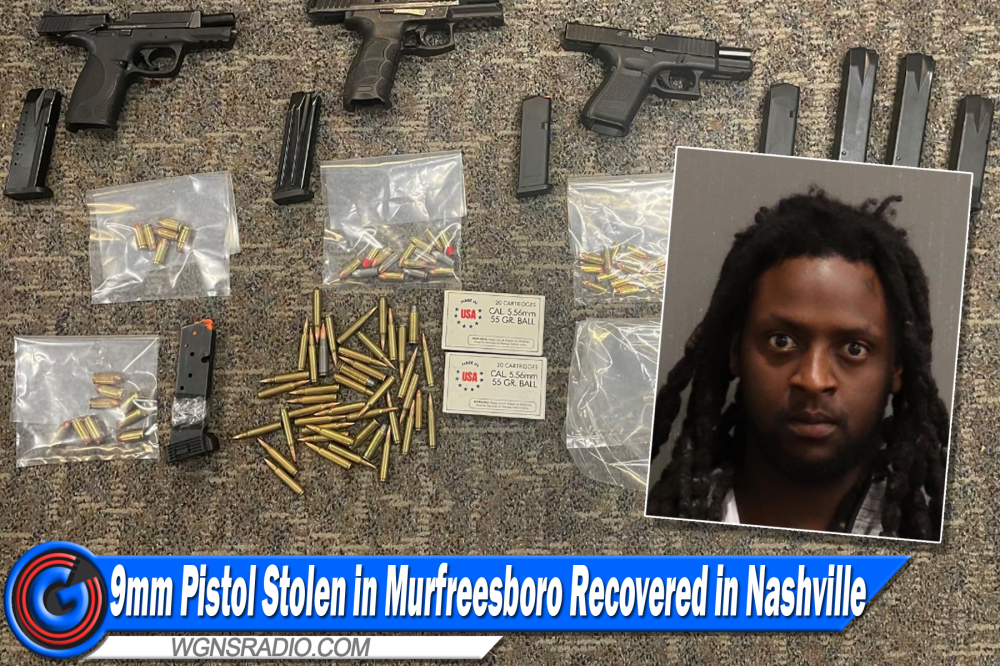 A 9-millimeter semi-automatic handgun reported as stolen in Murfreesboro earlier this year in January (2022), has been recovered in nearby Nashville. The pistol was alleged to be in the possession of a convicted felon with a history of violence, according to Metro Police.  As of Monday morning (4/11/22), 25-Year-old Eric Blivens remains jailed following his arrest this past week (04/05/22). Nashville detectives reported he was also in the possession of two more semi-automatic pistols.

In years past, Blivens received a four-year probated sentence last April (2021) for being armed and physically attacking his 21-year-old girlfriend. Prior to that, he received a four-year sentence in February of 2020 for felony reckless endangerment, felony evading arrest and unlawful gun possession by a convicted felon. Going back even further, Blivens received a three-year sentence in 2016 for aggravated burglary. Any one of those felony convictions prohibit Blevins from having firearms.

ADVERTISEMENT
Scroll down to continue reading this story...

Last Tuesday, Nashville detectives spotted Blivens in the Napier-Sudekum neighborhood. Knowing that he was wanted on outstanding probation violation and domestic assault warrants, detectives followed him to Moorewood Drive. He was taken into custody after parking his vehicle.

A total of three guns were found inside his car. One, a nine-millimeter semi-automatic that was stolen during the burglary of a parked pickup truck on 12th Avenue South in November of 2021. Another nine-millimeter pistol that was reported stolen from a car in Murfreesboro this year. The third handgun recovered was a .40-caliber semi-auto pistol, which had not been reported as being stolen.

Currently, Blivens is being held without bond on his most recent alleged probation violation warrant. Detectives will be asking the United States Attorney’s Office to consider prosecuting him federally.