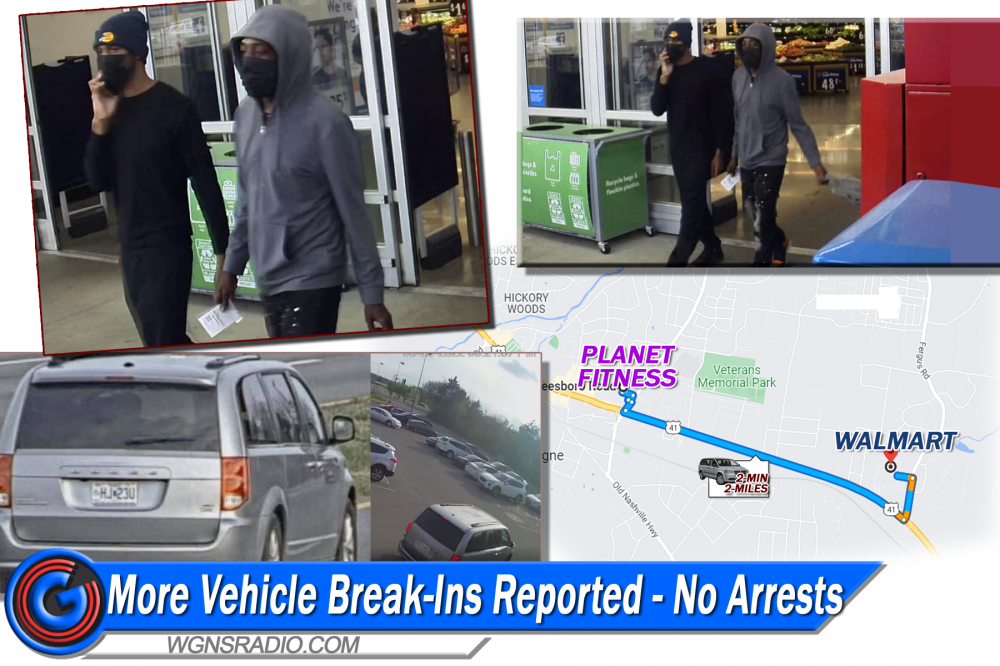 WGNS has more vehicle break-ins to update listeners on. This rash of crime took place in LaVergne last month and has yet to end in arrests.

The targeted vehicles were parked outside of Planet Fitness at 5185 Murfreesboro Road on March 29th. After the cars and trucks were broken into, the thieves headed 2-miles up the road to Walmart, where the two to three of them allegedly used credit cards stolen from their theft operation to buy goods.

At Walmart, the subjects racked up $1,000 in charges before fleeing the store, possibly in a silver Dodge minivan. On the back of that minivan, a stolen tag that was believed to have been taken from one of the cars they had just ransacked.

After their spending spree at Walmart, the trio (only two captured on camera – above) headed to Murfreesboro the following day. In the ‘Boro, the culprits allegedly wined and dined, thanks to one victim leaving her purse in her car that was parked outside of Planet Fitness in LaVergne. Police later found the stolen tag that was on the thieves’ minivan; the license plate was located behind the restaurant the culprits had just visited.

Scroll down to continue reading about the LaVergne break-ins and to learn about the nearly 100-break-ins in Murfreesboro...

So far, the subjects have not been apprehended and LaVergne Police have released photos of at least two of three persons of interest in the break-ins (Photo above this news story).

Meanwhile in Murfreesboro, police continue their investigation into nearly 100-vehicles that were broken into between March 1st and April 8th. In that case, authorities have followed one of the stolen credit cards taken from a vehicle – all the way to Hendersonville. In Sumner County, at least one subject was caught on camera twice at two different Hendersonville Kroger stores making purchases. See that news story HERE on WGNS.

Can you help authorities in the LaVergne vehicle burglary cases?

LaVergne Police are searching for three suspects. If you recognize any of the men captured on camera in LaVergne, call the LPD at 615-793-7744.