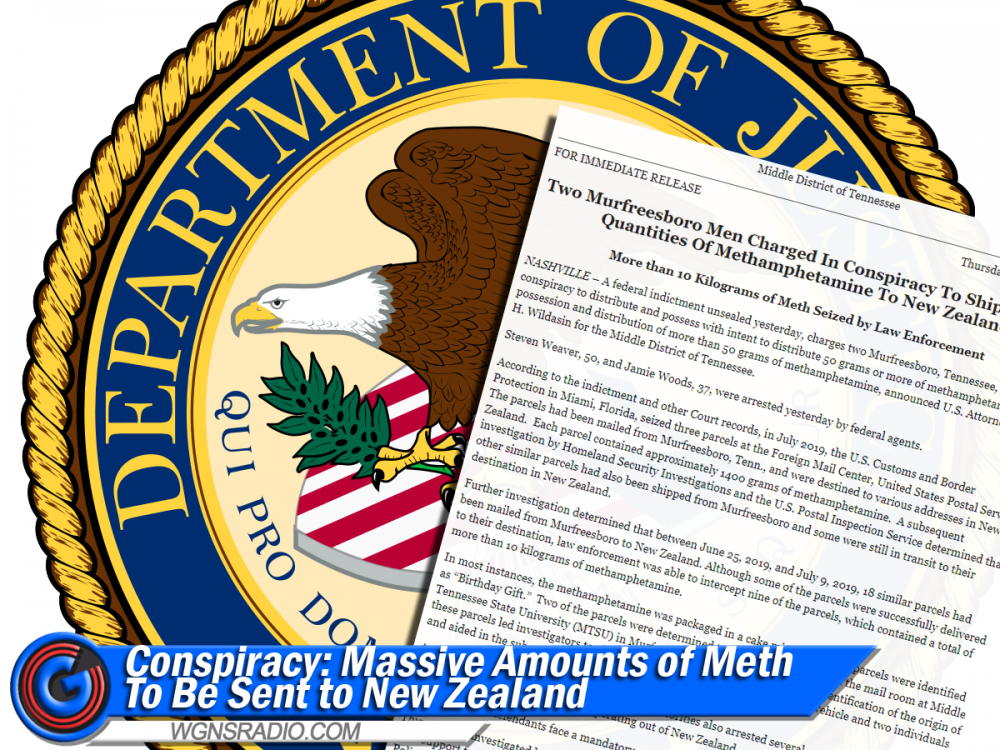 ADVERTISEMENT
According to the indictment and other Court records, in July 2019, the U.S. Customs and Border Protection in Miami, Florida, seized three parcels at the Foreign Mail Center, United States Postal Service. The parcels had been mailed from Murfreesboro, Tenn., and were destined to various addresses in New Zealand. Each parcel contained approximately 1400 grams of methamphetamine. A subsequent investigation by Homeland Security Investigations and the U.S. Postal Inspection Service determined that other similar parcels had also been shipped from Murfreesboro and some were still in transit to their destination in New Zealand.

Further investigation determined that between June 25, 2019, and July 9, 2019, 18 similar parcels had been mailed from Murfreesboro to New Zealand. Although some of the parcels were successfully delivered to their destination, law enforcement was able to intercept nine of the parcels, which contained a total of more than 10 kilograms of methamphetamine.

In most instances, the methamphetamine was packaged in a cake mix box and the parcels were identified as “Birthday Gift.” Two of the parcels were determined to have been mailed from the mail room at Middle Tennessee State University (MTSU) in Murfreesboro, on June 25, 2019. The identification of the origin of these parcels led investigators to video footage from MTSU which captured a vehicle and two individuals and aided in the subsequent identification of the defendants.

As a result of this investigation, New Zealand authorities also arrested several suspects and dismantled a large drug trafficking organization operating out of New Zealand.

If convicted, the defendants face a mandatory minimum sentence of 10 years, and up to life in prison.

An indictment is merely an accusation. The defendants are presumed innocent until proven guilty in a court of law.