Two men, one from Rutherford County and the Second from Warren County - Behind bars after I-24 Pursuit 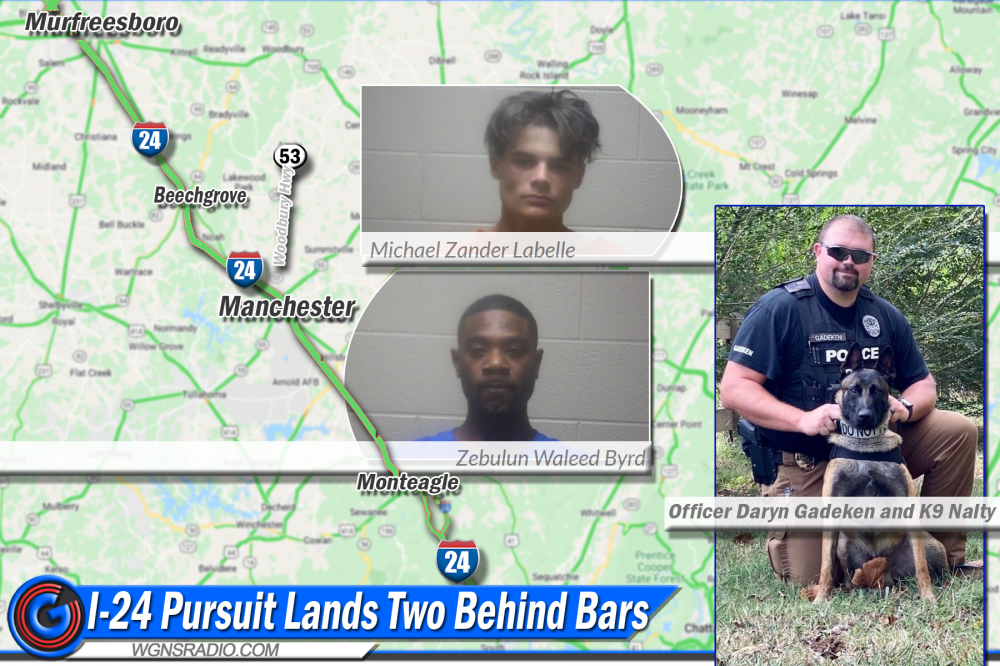 (COFFEE COUNTY, TN) Two suspects, one from Warren County and the second from Rutherford County, have been accused of running from the law and are now in custody and face a litany of charges. The incident started on the inbound lane of I-24 West earlier this week (April 26, 2022).  A third suspect remains at large.

According to Coffee County Sheriff’s Department Chief Deputy Frank Watkins, a patrol deputy was behind the subjects on Interstate 24 West at approximately 4:30, Tuesday morning when they began “driving recklessly.”

ADVERTISEMENT
When the deputy attempted to stop the vehicle, the driver allegedly began passing other motorist by driving down the shoulder of the road at a high rate of speed. Partner Station WMSR reported the subjects then turned around and came back into Coffee County after hitting the Rutherford County line.

Shortly after the turn-a-round, someone in the vehicle threw a gun and a white substance out the window, according to Chief Deputy Watkins. Authorities report that substance was believed to be methamphetamine.

Seconds into their re-route into Coffee County, the vehicle wrecked directly off of I-24 near the Woodbury Highway. Authorities say the trio quickly attempted to flee on foot, running towards a new subdivision.

Scroll down to continue reading about the pursuit that landed a Rutherford and Warren County man behind bars...

The Manchester Police Department responded to a mutual aid request from the sheriff’s department near the rear of The Reserve at Northridge, a developing neighborhood where the three suspects allegedly fled.

One subject was quickly apprehended by Manchester Police K9 Officer Daryn Gadeken and K9 Nalty. At approximately 8:45 a.m. a second suspect was apprehended near Melrose Market on US Highway 41.

The third suspect remains at large and authorities believe he is no longer in the area.

Arrested were 20-year-old Michael Zander Labelle of McMinnville and 35-year-old Zebulun Waleed Byrd of Smyrna. Both subjects are in custody at the Coffee County Jail.

Meanwhile, Smyrna resident Zebulun Byrd is being held on a $329,500 bond and is facing charges of evading arrest, resisting arrest, reckless endangerment, manufacture, sale, delivery, possession of methamphetamine, reckless driving, tampering with or fabricating evidence and theft of property.

Both Labelle and Byrd remain behind bars in Coffee County, as of Friday morning (04/29/22).