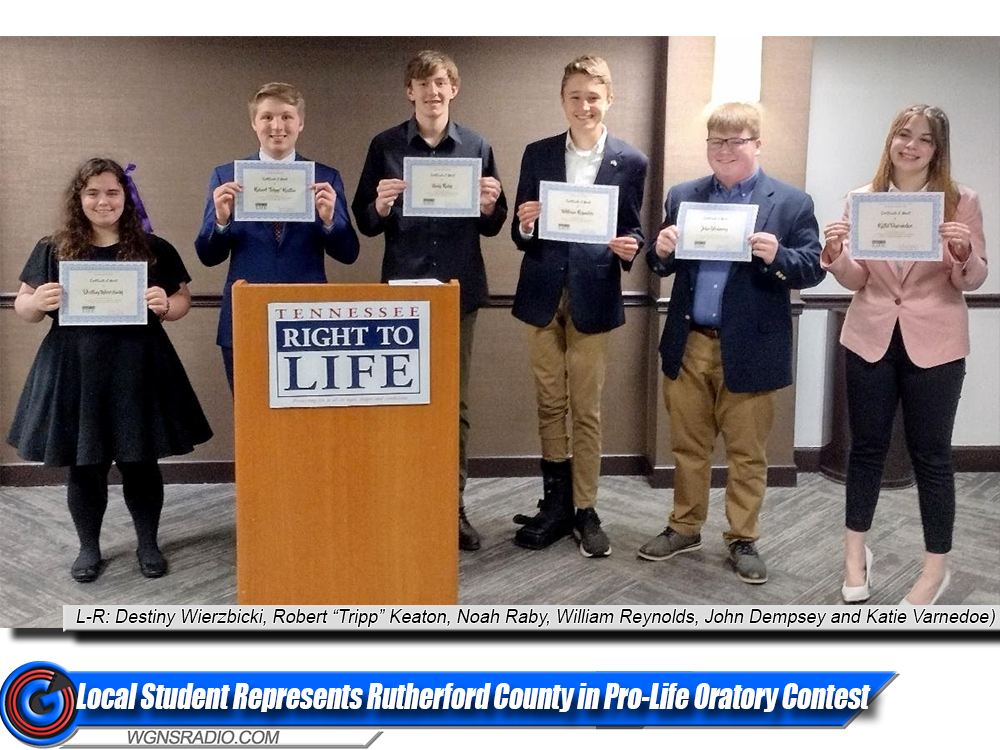 (Murfreesboro, TN) “The doctor told my parents that abortion was their only option…so they fired him,” stated John Dempsey during the recent Tennessee Right to Life Oratory Contest for high school students. “Now that you know MY story, I have a question, what is our responsibility in this very important and deeply personal issue?” Dempsey asked. “…we must offer hope, offer help and offer humanity.”
ADVERTISEMENT
The 23rd annual Tennessee Right to Life Oratory Contest for High School Students was held on Saturday, May 7th at The Hyatt Brentwood/Nashville. Winners from regional contests across the state qualified to attend by competing against public, private, and home-schooled students in grades 9-12. Each contestant researched, wrote, and presented an original 5-7 minute pro-life speech on abortion, euthanasia, infanticide, or stem-cell research.

William Reynolds took first place in the contest. William is the son of Jasper and Cathy Reynolds and serves as President of Students for Life of Southeast Tennessee. He gave a passionate speech on abortion, citing it as the “most monstrous evil the world has ever seen.” William concluded his speech with a compelling challenge to the audience to never stay silent, never sit down, never cower in fear, until abortion is illegal and unthinkable. As a sophomore, William will be eligible next year for the National competition that is open to juniors and seniors.
John Dempsey represented Rutherford County and will now go on to represent Tennessee at the National Right to Life Oratory Contest in Atlanta in June.  Participants from previous oratory contests have gone on to continue speaking across the country, started collegiate student groups, and become involved in their local chapters and community pro-life outreach efforts.
“All of the participants were very impressive and had obviously prepared well with statistical facts and many even with personal testimonies,” said Will Rivers, emcee of the event.  He continued, “As those who believe in a culture of life continue to look toward scientific facts and providing meaningful alternatives to abortion in Tennessee and across the nation, we are confident that these young women and men are fully capable of being the future leaders of the pro-life movement.”