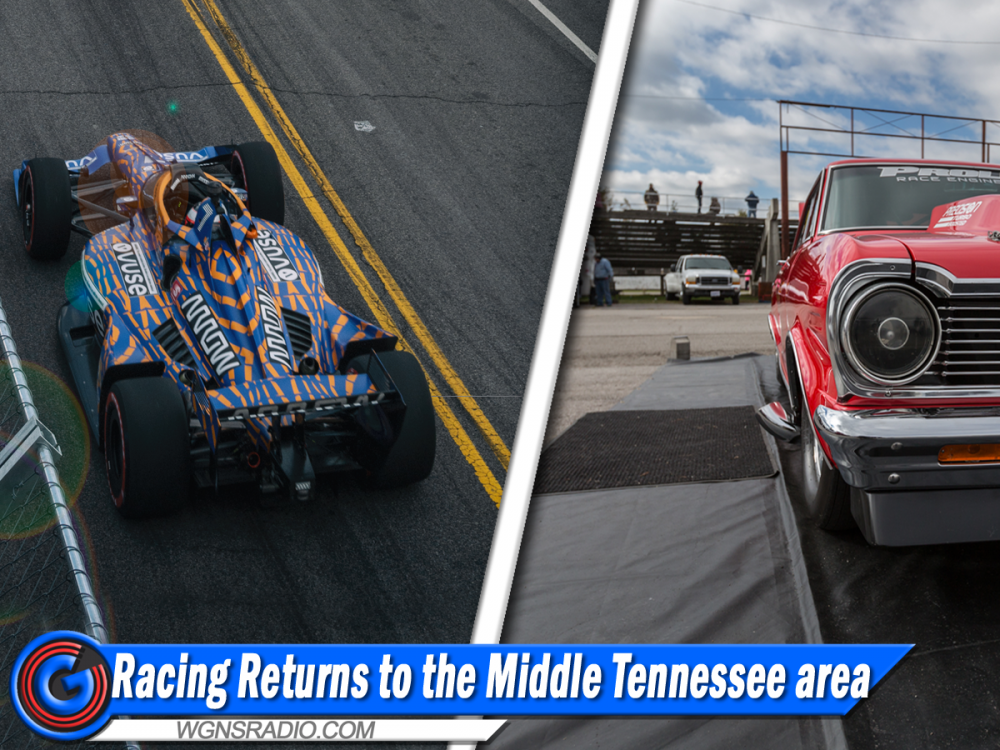 The racetrack that sits on a large piece of land at the edge of Rutherford and Wilson Counties is no longer dormant. Reopening of the speedway took place during the last half of the COVID Pandemic in 2021...Erik Moses took-on the task of reopening the Nashville Superspeedway after the racetrack closed some 10-years ago. He suggested that 2019 may have been a turning point that helped propel the racetrack forward in 2021…Moses, a veteran sports executive, is the President of the Nashville Superspeedway.

Some of the upcoming events this summer include car shows, hot rods and of course – RACING. NASCAR’s Ally 400 will be the first big racing event of the summer on June 26th. Other races leading up to the Ally 400 include the Rackley Roofing NASCAR 200 and the Tennessee Lottery 250.

More Upcoming Event Details: The weekly car show that previously met in the Cool Springs area has moved their event to the Rutherford / Wilson County speedway. On Saturday, June 4th, Nashville Cars n’ Coffee will be at the Nashville Superspeedway off of I-840.

The 2022 HOT ROD Power Tour will celebrate their 28th anniversary with a stop at the speedway on Tuesday, June 14th. On the 24th of June, the Rackley Roofing 200 NASCAR Camping World Truck Series will take place. The following day, the Tennessee Lottery 250 will happen on the 25th. NASCAR’s Ally 400 will be the first big race of the summer on June 26th.

More Details on Last Years Reopening of the Superspeedway:

In other racing news, the Big Machine Music City Grand Prix will be back this year. The Indy Car Race that hit the downtown Nashville streets and reportedly generated over $20-million for Middle Tennessee businesses, will be held August 5th through the 7th this year. 2022 Equals track improvements and a touch of water sports has even been added to the line-up.

A new restart zone will highlight several track modifications for the competitors while fans will enjoy some new entertainment options, including professional jet ski competition, during the Big Machine Music City Grand Prix INDYCAR weekend set for Aug. 5-7 at the Nissan Stadium campus.

The most impactful competition alteration for all five series competing in the race weekend – the NTT INDYCAR SERIES, Indy Lights, GT America,Trans Am and Stadium SUPER Trucks – will be the shift of the restart zone.

During last year’s inaugural Big Machine Music City Grand Prix, the restarts occurred at the finish line in front of Nissan Stadium but now will move to the long straightaway as the field exits the Korean Veterans Bridge and toward Turn 9. It will be the same zone that was used for the start of each race last season and should provide cleaner restarts and more immediate passing opportunities.

Course Improvements: Other modifications or changes to the 2.17-mile, 11-turn temporary street circuit include:

Waterfront Additions: While the Korean Veterans Bridge serves as the signature of the track layout, the Cumberland River that it crosses also will be an area with plenty of action during the race weekend. The new additions will be a stop on the Pro Watercross National Tour and the General Jackson Riverboat Experience.

The Pro Watercross series, in conjunction with the Big Machine Music City Grand Prix, will stage the inaugural Nashville Invitational event on Friday, Aug. 5, and Saturday, Aug. 6, of race weekend.

The jet ski riders will reach speeds of more than 85 miles per hour competing against each other on a three-quarter mile, closed-course layout on the Cumberland River. Friday’s action will feature slalom competition with the riders racing on adjacent courses. On Saturday, the competitors will go head to head in a more traditional style of racing.

Spectator viewing areas will be located in the Big Machine Music City Fan Zone along the East Bank as well as on the downtown side of the river at 143 First Avenue North. Fan Zone viewing is free with event admission and the downtown location will be free admission.

The General Jackson Riverboat will be the featured water entertainment on Sunday, Aug. 7, 2022 in anticipation of the Big Machine Music City Grand Prix NTT INDYCAR SERIES race at 2 p.m. CT.

All-day food and beverage (alcohol not included) will be available on the riverboat, which gives guests the option of a cruise from Opryland or just board at the boat ramp adjacent to the Nissan Stadium campus where it will be moored. The boat is climate controlled with closed-circuit race coverage and private restrooms.  A general admission ticket to roam the grounds and enjoy the race festivities is included in the $349 price.

Fan Enhancements: The Fan Zone also will get several enhancements highlighted by the relocation of the secondary music stage moving to the footprint closer to the river, heightened bar / gathering experiences, more food trucks, and more sponsor activation areas.

The Big Machine Music City Grand Prix will be a three-day festival of racing and music from Aug. 5-7 featuring the NTT INDYCAR SERIES, Indy Lights, GT America, Trans Am Series, Stadium SUPER Trucks and Vintage Indy. The musical entertainment is highlighted by nightly on-site concerts featuring prominent artists who will be announced at a later date. For ticket and event information, please visit www.musiccitygp.com.