(MURFREESBORO) At a press conference in the Murfreesboro City Hall's Rotunda, Mayor Shane McFarland announced that a $40-million corporate investment on city owned property at the intersection of Medical Center Parkway and Gateway Boulevard would feature a 25,000 square foot indoor entertainment venue with food and drink services as well as an and outdoor amphitheater.

The Sunset On The River At Murfreesboro

The Sunset On The River At Murfreesboro will have a 5-star restaurant serving breakfast, lunch and dinner as well as meeting spaces. The live music theater will seat approximately 4,500 persons, including 32 firepit suites. 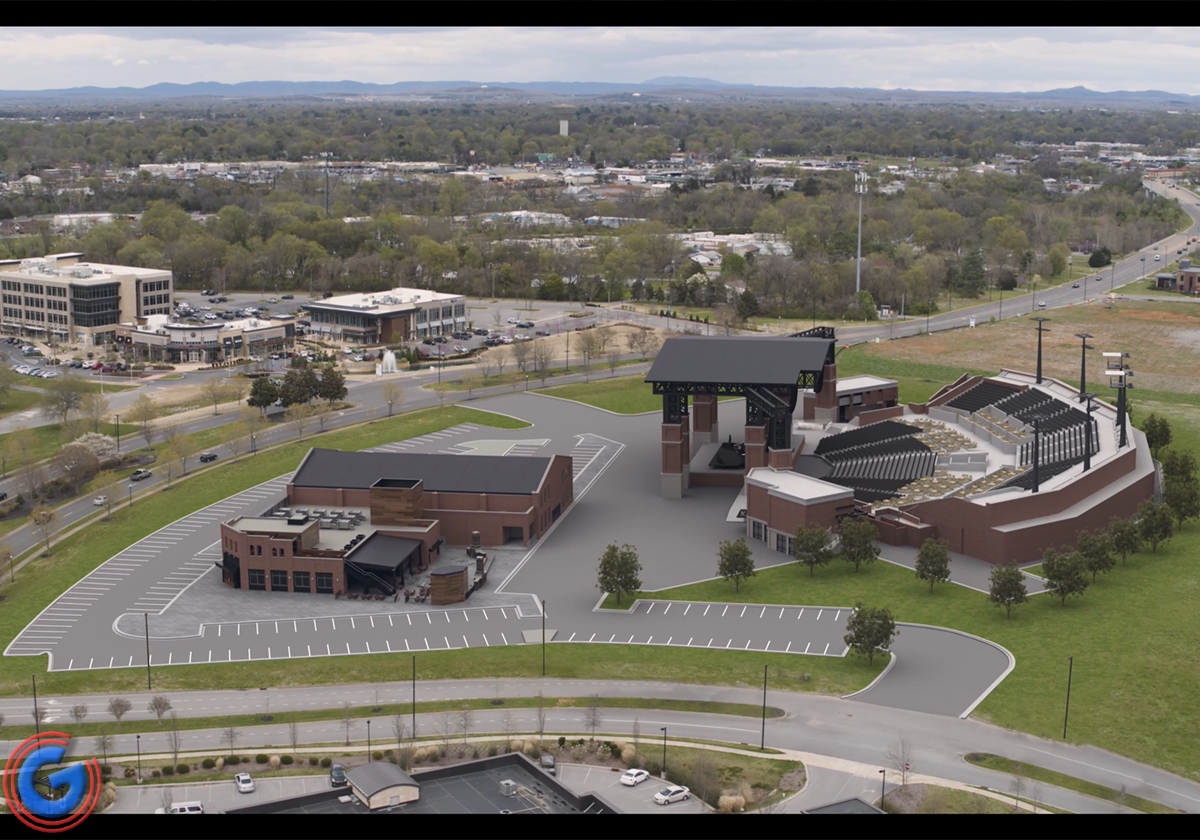 The development on the city's 18-acres will also create approximately 200 jobs.

More Details: Mayor Shane McFarland and JW Roth, Chairman of Notes Live, INC, an aggressive new player in live music space, unveiled plans to open a 4,500-seat state of the art open-air amphitheater in the Murfreesboro Gateway called The Sunset Music Colosseum on the River. The multi-million-dollar Sunset Amphitheater will host large touring acts on a live music entertainment campus featuring amenities including 32 firepit suites alongside stadium-style seating and causal lawn seating. Livestreaming from the amphitheater and the neighboring indoor venue, the Boot Barn Hall, are anticipated. The facilities will be located on the 18.2-acre City parcel located on the southeast corner of Medical Center Parkway and Gateway Boulevard.

Notes Live, INC and City officials have entered into a non-binding Memorandum of Understand and will continue to negotiate binding development agreements that will be brought for Murfreesboro City Council approval.

“We are excited to announce another high-quality entertainment venture to our City featuring live music in both indoor and outdoor settings,” said Mayor Shane McFarland. “Providing final agreements are approved by Council, the amphitheater will be a public-private partnership adding a significant amenity to the area and elevating Murfreesboro in the Nashville music scene. As mayor, I am delighted, along with the City Council, to welcome Notes Live to Murfreesboro in making this substantial investment and we look forward to Notes Live contributing to the community in many ways.”

An adjoining Boot Barn Hall will hold up to 1,400 people indoors. It will be modeled after Notes Live’s Boot Barn Hall in Colorado Springs, which quickly became one of Colorado’s premiere music venues after opening in February 2019. Together, the venues are expected to hire 200 full and part-time employees featuring weekly concerts. Notes Live expects to see approximately 800,000 patrons per year across Bourbon Brothers, Boot Barn Hall and the Sunset on the River.

“I can’t tell you how excited we are to be full steam ahead in building our new Murfreesboro campus. We love Murfreesboro and plan to build one of the most luxurious music campuses in the country. We expect our live streaming and content strategy to make ‘Live from Murfreesboro’ a household name in every living room in America,” said JW Roth, Notes Live Founder and CEO.

Murfreesboro is the third live music development for the emerging new player in the independent live entertainment space and is already “recognized as one of the best new music venues in the country.” Notes Live recently announced the opening of an 8,000-person state-of-the art outdoor amphitheater, The Sunset, in Colorado Springs, on the same campus with Bourbon Brothers Smokehouse and Tavern. Additional venues are underway in mid-sized markets with growing populations, including Gainesville, Georgia, a suburb of Atlanta, as well as plans to expand into Florida, and North Texas.

Notes Live identifies markets in fast-growing regions with opportunities for music and entertainment with unbeatable sound, sightlines and elevated food and beverage offerings. Murfreesboro is an attractive high-growth area, located along major corridors near the Music City with positive age and income demographics.

“This potential public-private partnership announcement definitely fits our long-term vision for the City. Murfreesboro civic leaders have long set sights on an amphitheater within the City as part of park development including a tentative design on the same property,” said City Manager Craig Tindall. “Music industry professionals have indicated to developers the excitement about Notes Live plans and the belief in its success. The additional media platforms planned to grow from the venues will be an important aspect in meeting the City’s future economic objectives.”

Within the next year and a half, Notes Live will be operating a half dozen large and mid-sized premium venues across the country, with plans well underway to open additional venues in Georgia, Texas, and Florida. Roth’s attention to detail informs every decision made in his concert venues, from the tables—all custom-made hightops for an optimal sightline whether the attendee wants to sit or stand—to the state-of-the-art sound systems included in the design. Notes Live has a proven ability to work closely with the government bodies in all the areas where it is expanding and currently has the backing of over 60 institutional and individual investors.

Notes Live, founded by Colorado Springs-based entrepreneur JW Roth, is the rapidly growing live-entertainment company that by the end of 2023 will be operating a half dozen large and mid-sized premium music venues across the West and South.  The company identifies areas with growing populations but a dearth of high-quality music and entertainment venues and offers premium concert experiences, complete with unbeatable sound and sightlines as well as elevated food and beverage options.  It currently boasts a Colorado Springs entertainment campus with the Boot Barn Hall concert venue, Bourbon Brothers restaurant, and Buttermilk breakfast eatery and will have launched similar locations in Georgia, Florida, Tennessee, and Texas by the by the end of 2023, as well as the company’s crown jewel:  The Sunset, a state of the art, 8,000-person open-air amphitheater in Colorado Springs that will host the largest touring acts in the country.