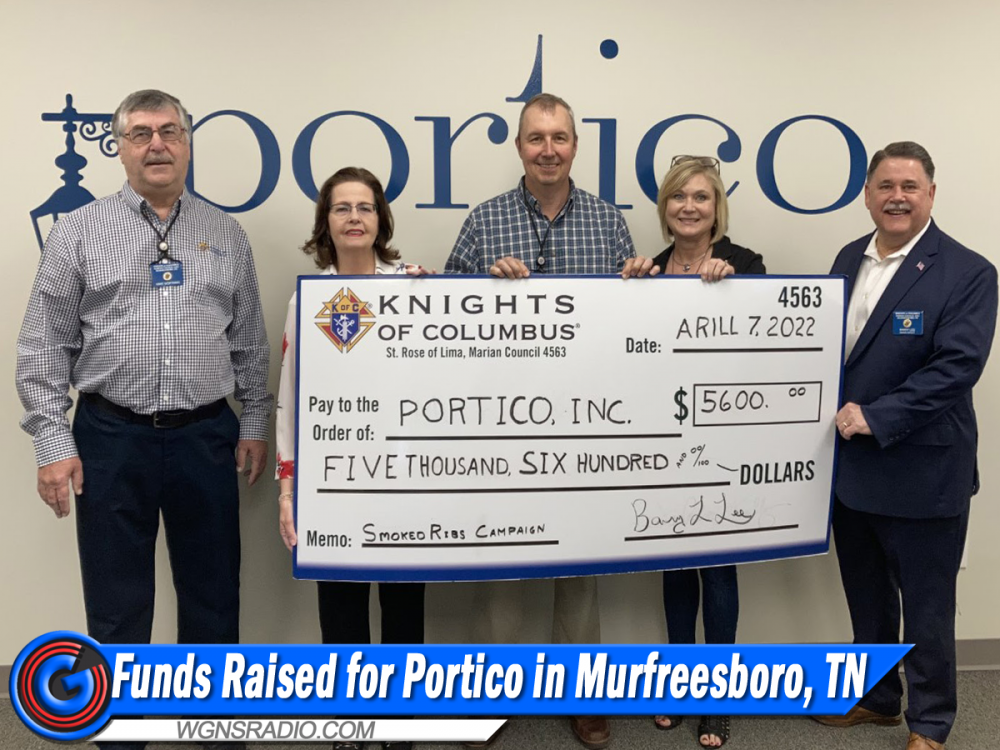 (Rutherford County, TN) The Murfreesboro Knights of Columbus at St. Rose of Lima Church in Murfreesboro, found the recipe to boost their support for the “Respect for Life Initiatives of the Portico Crisis Pregnancy Center.” Members of Marian Council #4563 worked together to raise more than $5,600, which is a 133 percent increase over last year. The money was raised during their donation-only Smoked Rib Fundraiser.

The funds raised went to Portico, an organization that helps those who have an unexpected pregnancy. Portico serves Rutherford County from their office on South Church Street in Murfreesboro. There, clients meet with staff and volunteers to receive confidential information on not only birth, but also on adoption, educational information, referrals and more.

ADVERTISEMENT
In addition to offering pregnancy support and education, the agency also provides pregnancy tests, prenatal vitamins, sexually transmitted disease testing, an ultrasound and more. Portico can also guide soon-to-be mothers to support groups for not on mothers, but soon-to-be fathers as well.

For those who have had a past abortion, Portico can lead mothers and fathers to Post Abortion Support. Reports from Psychology Today indicate Post Abortion Stress Syndrome, commonly known as PASS, can have profound psychological repercussions on a woman, despite their religious, political or philosophical views.

The mental aftermath of an abortion can lead to feelings of guilt, anxiety, depression and even suicidal thoughts. In fact, many suffer from Post Traumatic Stress Syndrome or PTSD after going through an abortion.

The Murfreesboro Knights of Columbus at St. Rose of Lima Church in Murfreesboro raised funds for Portico by serving more than 400 racks of ribs . Tammy Burrow, Director of Development for Portico, said they plan to use the financial gift to provide supplies and materials for their new fatherhood initiative. They currently have five men in training to become coaches for the fathers they serve at Portico.

The father initiative is a new program for Portico, and they are hoping to equip new dads, as well as moms, to choose life by providing a support system for them. Their fatherhood program will include male coaches (client advocates) to meet and speak truth in love to the fathers-to-be and to help them navigate this uncertain time in their lives. Their hope is to encourage healthy relationships and strengthen families.

This is only the second year the council has hosted the Smoked Rib Fundraiser, but its support for Portico has been ongoing for more than 10 years. The council also sponsors a Baby Bottle Campaign each year around Fathers' Day to support Portico. Parishioners are asked to take home a baby bottle and return it filled with loose change. The 2021 campaign raised about $9,600.