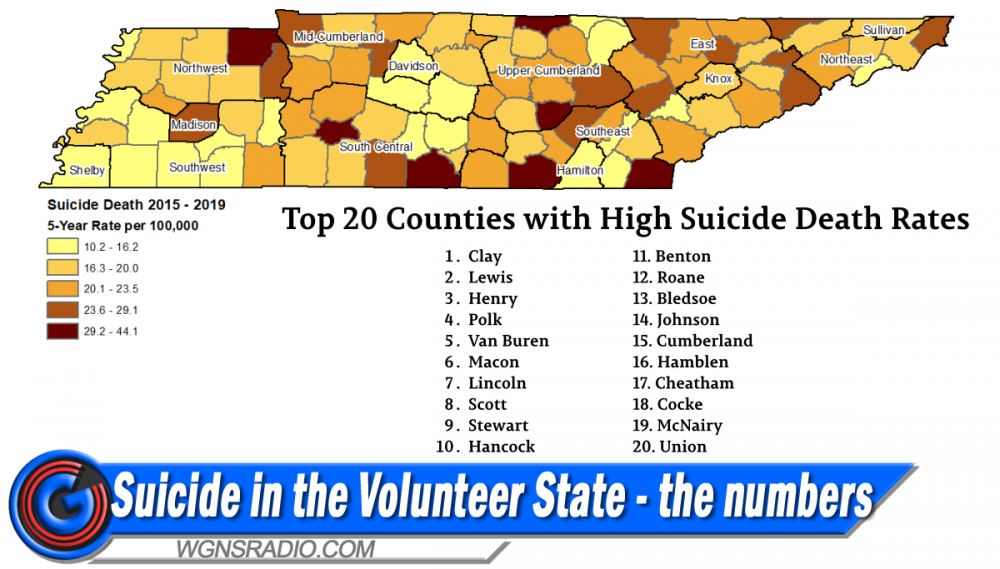 In Tennessee, suicide is the ninth leading cause of death overall. But you may be surprised when those numbers are broken down by age… That was Meghan Gwaltney, area Director of the American Foundation for Suicide Prevention. As the age of Tennesseans increase to 25, so do the numbers of those who commit suicide. For those in the 25 to 34-year-old age group, suicide is the SECOND leading cause of death.

During the height of the COVID Pandemic in 2020, the overall number of those who took their own life surprisingly went down by 3% nationally. However, there were also increases…

Throughout the state, Clay County had the highest suicide rate between 2015 and 2019. In that same 5-year window, Lewis County had the second highest rate, followed by Henry County. Rutherford County was not on the list of top 20 counties where suicides occur most often.

Self Harm: When looking at the number of people who harmed themselves to the point of requiring a visit to the emergency room, Trousdale County had the highest numbers in Tennessee, followed by Hickman and then Hancock Counties (2016 to 2019). While Rutherford County thankfully did not make the top 20-list, other counties nearby did. DeKalb County came in at number 6 on the list followed by Warren County at number 7. Cannon County ranked at number 12 on the list of counties with the highest self harm rates.

The most recent year for state statistics on suicide to be released was in 2020. You can view the full report for Tennessee HERE.

Listen to the entire 30-minute interview on the WGNS Podcast HERE. You can also find support groups and learn about a special fundraiser that will be held on Tuesday, May 24, 2022 HERE.