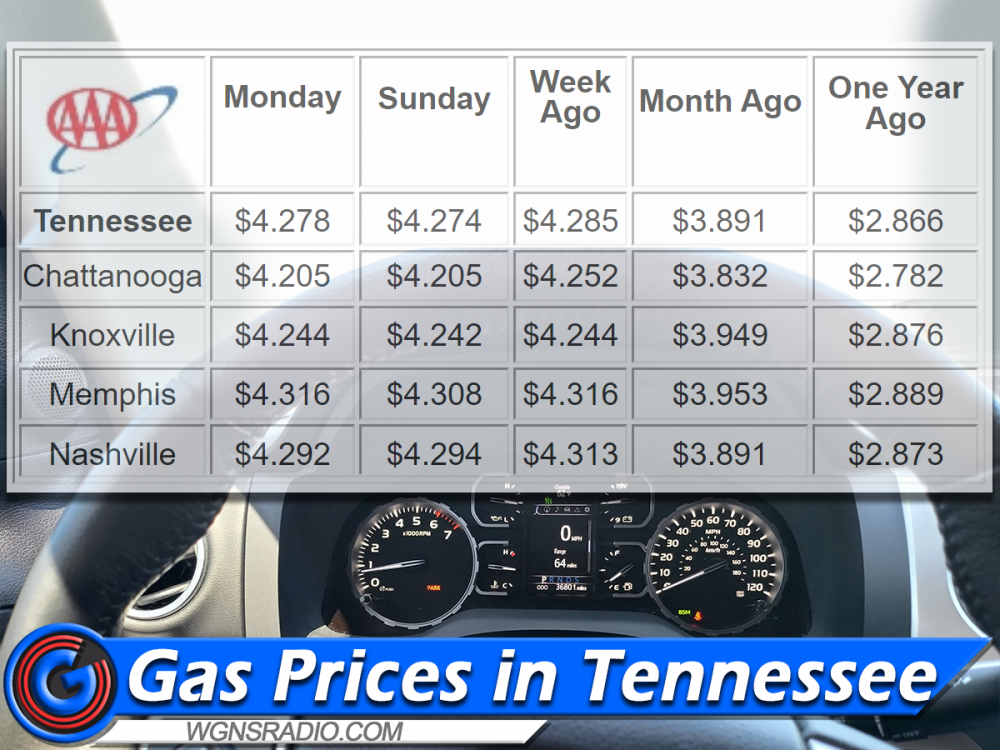 RUTHERFORD COUNTY, Tenn. —  Tennessee gas prices began to stabilize over last week, providing drivers with a small respite from additional increases at the pump ahead of Memorial Day weekend. Even with a bit of stabilization, drivers still paid the highest gas prices ever recorded for Memorial Day this year. The Tennessee Gas Price average is now $4.28 which is nearly 39 cents more expensive than one month ago and $1.41 more than one year ago.

"While drivers might have seen a small break in pump price increases this holiday weekend, we could be looking at the calm before the storm for gas prices," said Megan Cooper, spokeswoman for AAA - The Auto Club Group. "Crude oil prices surged to $115 per barrel last week alongside further tightening of domestic supplies. Renewed upward pressure on pump prices likely means additional increases in pump prices for drivers in the next couple of weeks."

A dip in gasoline demand provided drivers with a bit of stability at the pump, as the national average for a gallon rose less than three cents over the past week to reach $4.62. But this respite could be brief. Crude oil has moved above $115 a barrel due to fears of further global supply constraints caused by a European Union (EU) ban on Russian oil exports. And domestic gas demand may again start to climb as drivers fuel up for the three-month-long summer travel season, which began this Memorial Day weekend. AAA forecast nearly 35 million travelers hit the road for Memorial Day. It’s the highest number since 2019, despite record prices at the gas pump.

According to Energy Information Administration (EIA) data, total domestic gasoline stocks decreased by 500,000 bbl to 219.7 million bbl last week. Gasoline demand also dipped from 9 million b/d to 8.8 million b/d, approximately 700,000 b/d lower than a year ago. The softening of gas demand helped minimize price increases ahead of Memorial Day. However, gas demand may spike this week after drivers took to the roads for the holiday. But pump price increases could be limited if demand slows again following the holiday weekend.

At the close of Friday’s formal trading session, WTI increased by 98 cents to settle at $115.07. Crude prices rallied at the end of last week following news that the EU was seeking unanimous support of all 27 member countries to impose a ban on Russian oil later this year. Yesterday, EU leaders announced they will ban 90 percent of Russian oil imports by the end of 2022. Crude prices also increased last week after EIA reported that domestic crude supply decreased by 1 million bbl to 419.8 million bbl. The current level is approximately 13.3 percent lower than during the third week of May 2021. Crude prices could rise again this week if EIA’s next report shows total domestic supply remains tight.

Drivers can find current gas prices along their route with the free AAA Mobile app for iPhone, iPad, and Android. The app can also map a route, find discounts, book a hotel, and access AAA roadside assistance. Learn more at AAA.com/mobile.