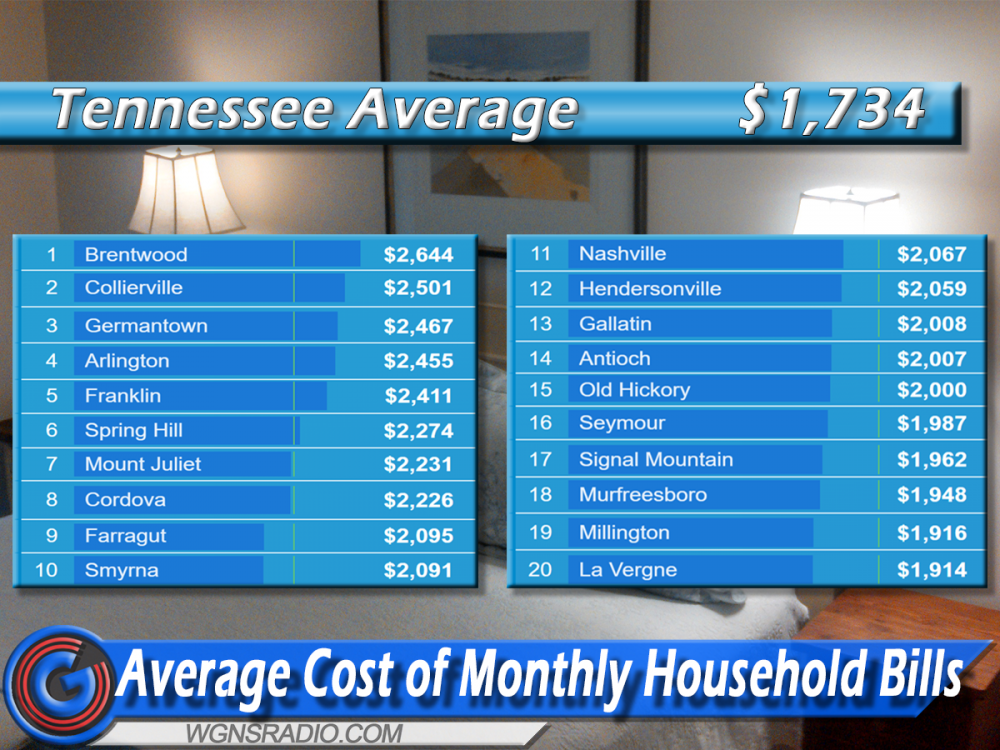 (MURFREESBORO, TENN.) - Doxo's recently released State by State Bill Pay Market report shows, among other things, that Tennessee is the #37th most expensive state for household bills. The report also found that on average, residents of Tennessee spend $1,734 per month on their 10 most common household bills, which is 13.4% lower than the national average of $2,003.

The average monthly mortgage payment in Murfreesboro comes in at $1,252. However, it is important to remember that a huge percentage of residents are making mortgage payments on a home that was purchased 4 to 5-years ago when prices were lower. In other words, that “average” mortgage payment will continue to grow with the recent influx of real estate transactions in the past 12-months.

Breaking down the cost of rent is a little tougher, because some residents are in brand new apartment complexes while others are living in duplexes, mobile homes and houses. Doxo Incorporated found that the average cost of rent in Murfreesboro added up $1,057 per month.

WGNS, further examined the price of rent in the Murfreesboro area and found that apartment complexes that were 5-years-old or newer charge an average of $1,723 per month for a 2-bedroom, 2-bathroom unit. See more on the cost of rent HERE.

The same report suggested that Murfreesboro residents pay $1,948 per month on the ten most common household bills. This is 12.3% higher than the state average of $1,734, and 2.7% lower than the national average of $2,003.

SMYRNA, TN. - Smyrna ranks as the 10th most expensive city for monthly household payments in Tennessee. There, the average cost of monthly bills adds up to $2,091. If we dissect that number to see the cost of housing, it appears the average home mortgage payment in Smyrna was $1,064 per month.  But, it’s important to remember Doxo Incorporated, the company that released the report, looked at a huge number of home mortgages to obtain the average and a large percentage of the mortgages were from loans that originated 5 to 10-years ago.

LaVERGNE, TN – LaVergne is the 20th most expensive place for monthly household bills in Tennessee. Residents in LaVergne spend an average of $1,914 per month on household bills. Of that amount, $830 is the average cost of a mortgage each month for LaVergne residents. The average car payment is $470 per month, with car insurance equaling $222 per month.

Average home prices in Rutherford County: The report released by Doxo shows the average monthly mortgage payment throughout Rutherford County is $1,048. That amount takes into consideration a multitude of home loans that were obtained 1-year-ago, 2-years-ago and even 15-years ago. If the same study is conducted 5 to 10-years from now, the monthly mortgage payments will be considerably higher.

In case you're curious, Dayton, TN is the least expensive place to live when considering your monthly bills. Those bills would include everything from auto insurance to mortgage or rent prices.

See More: The data, which doxo has for Murfreesboro as well as more than towns and cities in Tennessee, also breaks down bill payments into ten different categories, including utilities, auto loans, cable bills, and more.