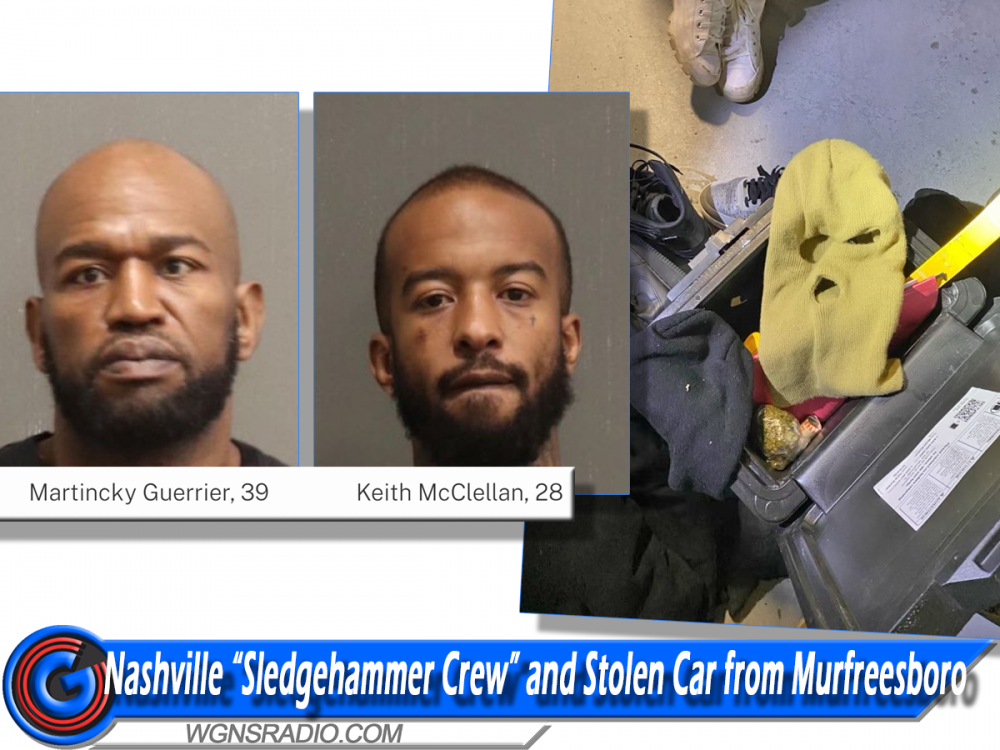 Above photos from Metro Police Dept.

In Murfreesboro, police continue to investigate the serial criminal dubbed the “Rock Burglar,” who is accused of breaking into more than 30-businesses. Meanwhile in Nashville, a case that had similar characteristics is coming to a close and inching its way towards the judicial system. However, one shining difference in the Metro case is that the suspects allegedly used a sledgehammer instead of a rock to gain entry into a large number of businesses, which is why the suspects were nicknamed the “Sledgehammer Crew,” according to Metro-Nashville Police.

While the Nashville break-ins are not believed to be tied to the Rock Burglar in Rutherford County, there is evidence that ties the Sledgehammer Crew to Murfreesboro. That evidence revolves around a Honda Civic that was reported as stolen in Murfreesboro.

Detectives in Nashville noticed the small sedan that was taken from the 'Boro parked in an obscure place, which ultimately led authorities to the suspects after monitoring the car and then following it. Investigators tracked the car by land and air, thanks to the Tennessee Highway Patrol helicopter. The Honda pulled behind the Starbucks on Highway 100 in Bellevue. A short time later, the Honda pulled away at a very high rate of speed. Ground units confirmed that glass had been smashed and the coffee shop burglarized.

The Nashville investigation took weeks of work before coming to a head this month with the arrests of two men, after the Starbucks burglary where a store safe was stolen. The pursuit of the Honda was initiated on Highway 100 and traveled into Belle Meade. Belle Meade Police attempted to deploy a spike strip, but were unsuccessful. According to Metro Police, the driver of the car continued to flee as passenger Keith McClellan, age 28, bailed out on Davidson Road and ran into the woods. 39-Year-old Martincky Guerrier, who was identified as the driver of the Honda, continued to flee - eventually crashing on Bolton Drive near Newberry Road, according to police. Guerrier was taken into custody by officers seconds after the wreck. An hour later, police located the passenger that reportedly ran into the woods.

An inventory of the Honda Civic reveled numerous burglary tools that included a sledgehammer, pry-bars, masks, and the safe from Starbucks. A news release from the Metro PD further showed that McClellan admitted to his involvement in multiple burglaries, but Guerrier declined to be interviewed.

In addition to the recovery of the Honda that was reported stolen in Murfreesboro, police suggest McClellan was in a stolen pickup the previous night. The truck in question was allegedly stolen from a Dodge dealership in Franklin County, Tennessee. The investigation is continuing as detectives work to solidify information on other persons connected to this alleged burglary group.

In Rutherford County, Murfreesboro Police continue to gather evidence in the “Rock Burglar” Case. Anyone with information on the burglaries or who knows the burglar should contact Detective Robert Jamison at 629-201-5581 or email tips to crimetips@murfreesborotn.gov. You can give anonymous tips by calling the Rutherford County Crime Stoppers hotline at 615-893-STOP (7867) or downloading the P3 Intel Mobile App.