Gun Control Protest in Nashville: March For Our Lives 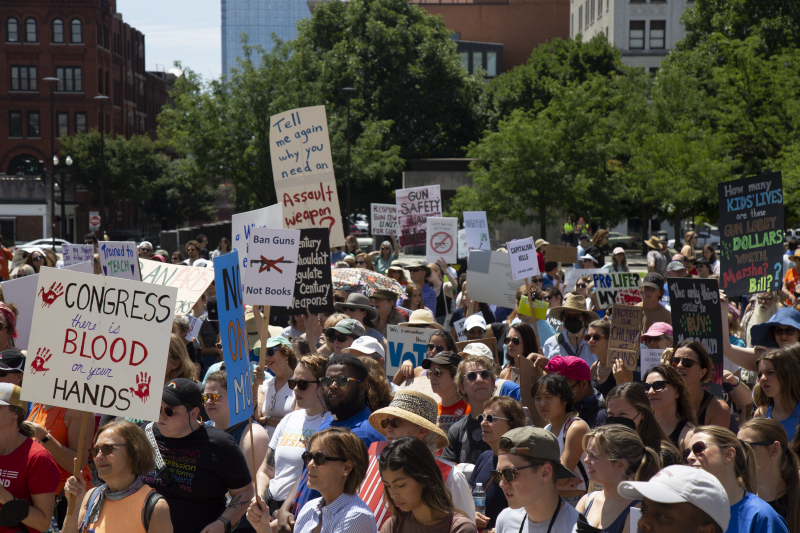 Around 1030am on June 11th, the Nashville Public Square began to fill with hundreds of people, all gathering in response to a recent phenomenon that has plagued the country over the last decade- Mass School Shootings. If you ask Americans from coast to coast, you'll get a vast spectrum of answers from Mental Health to School Security. The crowd in Nashville last weekend stood in solidarity with their approach to the issue: Gun Control. Embracing the first amendment, the protestors came raising signs and banners splattered with red paint, portraits of Uvalde victims, crude insults to the NRA and GOP, and for some parents -their children doubled as signs themselves- a reminder that kids are the focus of their argument. Despite the ridicule in their signs, the crowd was very approachable. After all, they were there because they wanted to be heard, and after speaking with a few high schoolers, parents, and longtime Nashville residents, it was clear that their motivation for coming out was to present to Tennessee legislators their goal- put an end to mass killings.

Much of the crowd was not shy in expressing their frustration with politicians (local and abroad) in regards to gun reform, which was mirrored in the address given by the key speaker/organizer, Carson Ferrara. Carson offered some of his stances on the issue just before the square gathering:

Speakers at the Square who spoke just before the march appealed emotionally to the crowd, citing their own personal experiences; One of which being a school staff member who recalled holding a dying 12 year old student in the aftermath of a school shooting. While there are two broad sides to the gun control issue, both sides are very fragmented when taking a closer look at each crowd's opinions. During the march, when asked about their specific position on the issue, some protestors advocated for a ban on AR Style weapons, some for a ban on what they deemed 'unreasonable' alterations to firearms (high capacity magazines, pistol grip, semi-automatic fire), and some go as far as a total ban on all firearms, including those in circulation.

The protestors marched to the Capitol building, where speakers more sternly voiced their stances. There was also a rememberance of Akilah Dasilva, one of the victims of the 2018 Waffle House shooting in Antioch. His brother spoke about the frustration in continuing to call on politicians for action after so much time has passed.

As the Rally at the Capitol began to disband, a counter protestor showed up with his sign worn on his body: a holstered pistol and tactical vest. "I'm not here to intimidate anyone" Ethan made clear, as he quickly drew a crowd behind the speakers tent. Ethan kept his stance strictly in the realm of self-defense. "We carry firearms for the same reason police do, to protect ourselves". With that point, he also cited the ineffectiveness of the Uvalde police during the one hour massacre at Robb Elementary. "There is a supreme court decision that states law enforcement has no constitutional duty to protect us. Who are they protecting and serving if it's not us?".

As the counter-protest began to lose steam, the After protest across the street persisted: Chanting "Do Your Job!" and "Vote Them Out!" in the direction of the capitol. Among them were two of the younger capitol speakers- Alejandro and Esa, who offered some of their stances on the issues revolving around the protest.