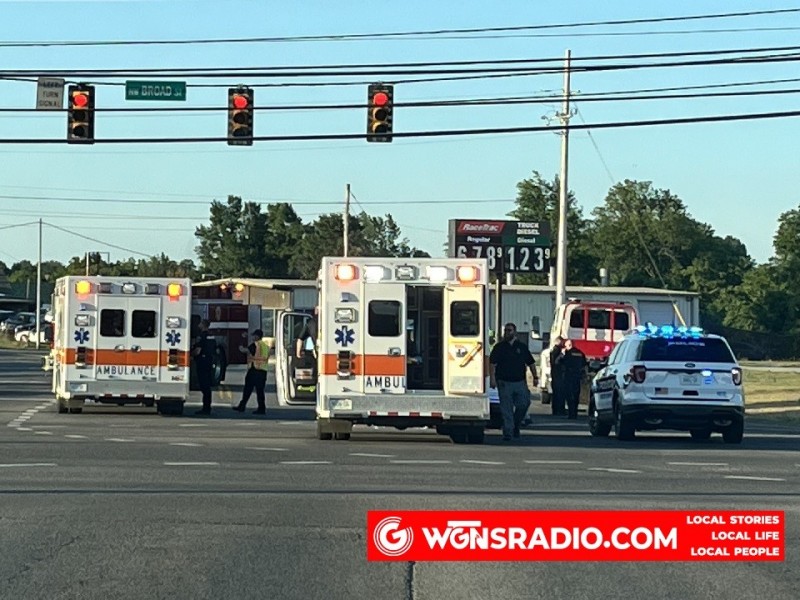 (MURFREESBORO) Here's an update on the Monday (6/20/2022) evening crash that occurred at 6:42PM at the intersection of NW Broad Street and N. Thompson Lane.  A citizen phoned police to report that a vehicle was on its side with possible entrapment.

It has also been confirmed that three vehicles were involved.

The WGNS reporter on the scene, confirmed with photos that there were two SUVs and a 4-door compact vehicle involved in the crash.

Murfreesboro Fire Rescue Department was able to extricate a patient from the black Toyota SUV.

At this time, WGNS has not been able to confirm whether or not the entrapped person had serious enough injuries to transport them to the hospital. There are also no reports on whether any other injuries resulted from the Sunday evening crash.

Two ambulances remained on-the-scene almost until when the roadway was reopened to traffic around 7:43PM Sunday night.

First responders from Murfreesboro Fire-Rescue, Murfreesboro Police and Rutherford County Emergency Medical Services worked as a team to treat the injured persons, investigate the crash scene, and clear the roadway.

WGNS News has still not received additional information on the number of injuries and the seriousness of them.

An agency spokesperson did send an email that indicated that the manner in which agencies file reports with the state, takes the information being sought by media out of the local department.

The email explained, "A state of Tennessee Titan crash report was done on this crash, and I don't have access to those.  *Only the parties involved, their attorney, insurance company or a designee through a signed affidavit; and they are not available to the public, including the media."

NewsRadio WGNS feels it is our responsibility to accurately report what is happening in Rutherford County. The only way to do that is to depend on the agencies that keep the community safe as the radio station's source of accurate information.

(MURFREESBORO) A little before 7:00 o'clock Monday evening, there was a serious multi-vehicle crash on Thompson Lane at Broad Street. The vehicles were turning from Broad and traveling north (away from the Thompson Lane overpass).

First responders from Murfreesboro Fire-Rescue, Murfreesboro Police and Rutherford County Emergency Medical Services worked as a team to treat the injured persons, investigate the crash scene, and clear the roadway.

NewsRadio WGNS encourages motorists to avoid the area as traffic is extremely congested.